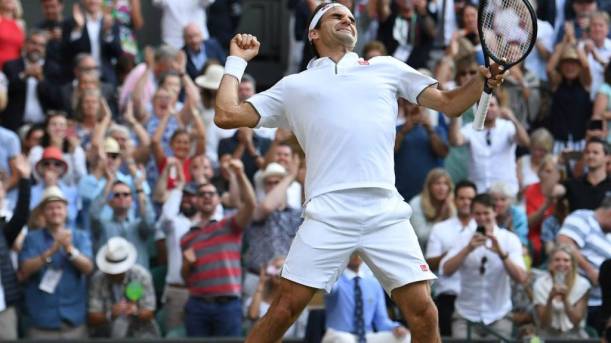 According my own preview, Federer in three or four would be an upset. Federer out-played Nadal all day, yet this was still, in the end, an upset.

The last set, especially the end of the match, proves this point.

At 3-2 in the fourth, Federer had his early break, so all he had to do is hold his own and serve out this match. Would he be able to hold three more service games?

The upset would be Federer able to serve out match.

He could have absolutely destroyed my theory and prediction had he broken Nadal down the stretch to make this even more lopsided. He had looks at the break, count them, two MPs on Nadal at 5-3.

After those two misses, Federer then had one final hold to secure his spot in the Wimbledon final.

Of course, the final game got very ugly. Federer remained cool, no doubt, but can you imagine Federer not holding serve there? He missed on his next two MPs.

He was out-playing Rafa all day (but for the short lapse in the 2nd set), but if Roger loses serve there, and the fourth set goes 5-5, this thing is destined for the fifth and I hate to tell you who has the advantage there.

So, again, this was a very close call, but a win for Federer none the less. Brilliant stuff from the Swiss. The BH got better as the match wore on, some of his play at the net was spectacular, FH looked quite good in spots, and Nadal looked just a little out of sorts, I’m afraid.

Federer goes into the final an absolute underdog against Novak (see age, rank, recent trend, etc.), but we’ll leave you with this: Imagine if Federer wins on Sunday? He probably doesn’t, but what if he does?

If he has one more gear, Novak will have his hands full.

Can’t wait for that match.

I’ll talk to you soon, more reaction and prediction.