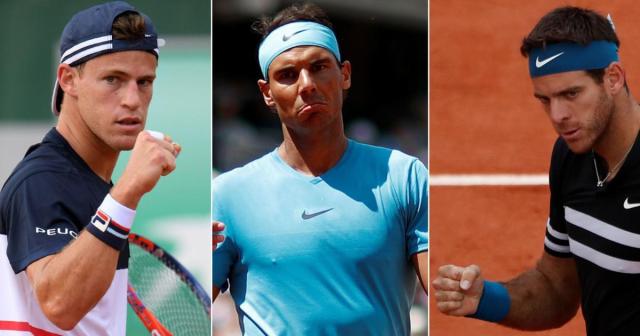 Today went pretty well as far as I’m concerned. Sure the picks worked-out, but the best part is we have a decent set of players reaching these final rounds of the French Open.

As I just said in a blog comment, if I really took the Cilic v Foghat match seriously, Marin would have been the bet. But you know me: the Italian Renaissance, the potential of a Fabio/Nadal clash — we like to have fun over here, too. Not a terrible call, but Cilic’s consistency at the majors has become a real disturbance in the force.

I really did like the Italian theme here in Paris. Now we’re left with Marco to do his country more proud than they must certainly already be. Felicitazioni!

Marco has his work cut-out for him tomorrow, for sure.

Call this a bit of a fortunate set of circumstances for Novak. He should beat Cecchinato in straights tomorrow. The stakes are too high to lose concentration, to have any sort of breakdown for a set or two. As much as I want to see the one-hander give Novak a bit of that spoiler’s resistance, perhaps put a little scare into the Serb, which means entertainment for the non-partisan crowd, beyond three sets would seemingly be an upset.

And Novak wants to be ready for what should be another date with Dominic Thiem.

No need to get too analytical here with Zverev v Thiem. Zverev has to be feeling the wear-and-tear and Thiem has to be thinking a bit of pay-back for the Madrid final, as well as Dominic’s own mission to continue his success at this major (two straight SF appearances, working on a third).

Thiem has been pretty efficient, losing three sets in the four matches he’s played. And from what I’ve seen, his pounding the ball approach is working with its typical affinity for the clay, showing real motivation to get back to the SF and a first French Open final.

Zverev, on the other hand, appears to be on a slightly different mission. He doesn’t have enough to win this tournament. He’ll need to beat a fairly fresh Thiem (2-4 H2H), Djokovic (likely, 1-0) and then (likely) Nadal (0-5).

Given that very likely scenario, one should have the impression that Sascha has had a productive run here (going back to his winning streak that ended in the Rome final against Nadal).  He has broken through at a major, pushed past that 4R barrier of his (he’d been past the 3R only once before this tournament — last year’s 4R at WB). So a QF-showing at Roland Garros has to feel pretty sweet.

But who am I to say he’s going to mail-in this match?

He could win tomorrow. The guy’s confidence has to be growing, which he’ll certainly have given his own Roland Garros season-of-survival and his straight set win over Thiem in the Madrid final a few weeks ago.

Zverev has a ton of confidence. I am not denying his potential to come-out tomorrow while he’s freshest, serve big, inflict damage with the ground strokes and take the first set. He could simply out-duel the Austrian who when a little flustered can start to go too big, lose his patience and have a less than stellar day.

No doubt this could happen.

But I am going with the Austrian (I need to move-on; the more I think about it, the more I like Sascha, as the guy is maturing, coming off his 2nd Masters this spring, and looking more and more like a seasoned ATP athlete with game and smarts — well coached and trained!).

For Dom’s sake (Novak waiting in the SF), he puts the pressure on early and finishes Zverev in 3 or 4. There. I doubled-down. I beliem in Thiem.

So, Novak v Thiem is your first SF.

The lefty German Marterer gave Nadal more confidence, likely. He even broke the Spaniard’s serve out of the gate and took the 10-time winner to a third set TB. That was a healthy bit of stress on the Spaniard’s game, just enough to hone his form for these last few rounds.

Schwartzman down 0-2 and pulling-off the comeback will send Anderson to his therapist. That’s clay, Mr. Anderson, against a true clay specialist. Patient, great defender, one of the best returns of serve, diminutive = fierce, etc., etc. What a nightmare. What a comeback.

This is one of the QFs I hand-picked (the other being Zverev v Thiem). 🙂

Del Potro v Isner went exactly as I thought. The big American can push all kinds of players around the court, but Del Potro, with his nonchalance and big-match saavy, was way too tall an order.

Again, what a great final eight. This is all a tennis fan can hope for even in-light of Nadal’s dominance and projected eleventh La Coupe des Mousquetaires.

One thought on “Roland Garros QF Part I”