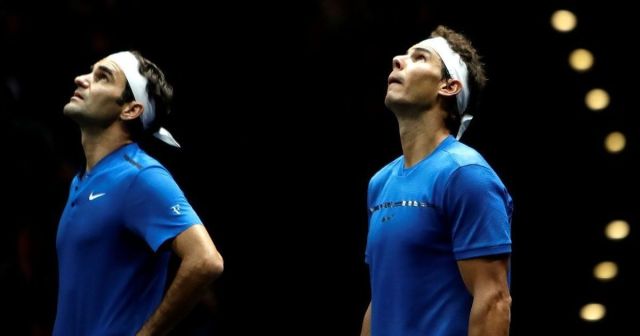 From my “draw analysis“:

Man, the rich get richer, no? Even the name of this week’s Masters event, the title of this post, makes me a little queasy. So, what are Fedal up to this week?

Who has the bumpier route to that tight hug at the net with his BFF in the proposed final followed likely by a hug on his wrist of another Rolex watch?

Del Potro got Federer in NYC but that was a bad backerer. Things looked tight early in this one in SF Shanghai, with the Argentinian moving well, BH getting stronger and the Fear Hand simply one of the best shots in the sport, ever. But Federer looked good too early. That was some dynamic HC tennis there, folks. DPo’s serve proved again to give the giant a massively formidable style of tennis.

But Federer kept coming. Finally getting his break in the second. The break happened in the third even earlier, in the third game. Federer seized control, really in the second set, but he seemed in the clear in the third. Del Po is about the only other guy on tour at this point with the balls to threaten Fedal. He certainly did in this one, in the first set.

Where I give the edge to Federer in this final tomorrow is his footwork, variety and serve. Watch the Cilic Nadal SF. Very tight match. Cilic moving really well actually. But Federer moves better, hits the ball deeper and lower and his serve will/should give him even more free points.

Now we say Federer is just too much for even a rampant Nadal.

Kinda feel vulnerable taking a 36 year-old over this peaking Nadal.

If Nadal breadsticks the old man, I got Jon Hamm on retainer.