I have to admit that I really only watched the matches today involving Federer and Djokovic. I will hopefully find the replay of Thiem and Dimitrov, in particular, later, among other highlights.

But Federer and Djokovic have the most interest here as they do probably anywhere else, other than the countries or fans of those other very relevant athletes toward whom I mean no disrespect.

To defend some of my commentary earlier, for instance skeptical of Federer: I am looking at the third set of a SF, BP and the tournament and even legacy on the line. I go to those high-stake moments, judging the tennis here-and-now on those pivotal moments down-the-line.

Back to today’s rounds and again no disrespect to those players not named Fedovic.

Admittedly, there may be no better development in the tournament than to have Dominic Thiem go berserk. The more one-hander power we have raking the lawns the betterer.  .  . 😉

Don’t forget Berdych’s little run in Miami; he had Federer in his sights.

But let’s start with the Djokovic v Gulbis match. To start, Gulbis, as we know, is an under-acheiving talent. He’s had some decent results, winning six 250-level tournaments, finding a RG semi-final in 2014 where Novak outlasted him in four sets; essentially showing some real signs of a threatening serve, BH and a kind of unique quality that gave us tennis fans some hope that we had ourselves a bonafide tour regular.

This has not been the case with Gulbis. He’s essentially wasted any talent he’s had, known as a party-boy, heir to a family of diverse talent and success, perhaps fortune and fame. Whatever the case may be, Ernests has been an ATP bust.

But he found his way in the weakest section of the draw, got by Del Potro and found himself face-to-face with his old friend, Novak Djokovic. He and Novak were hitting partners back-in-the-day and the Latvian actually beat Novak in R1 of Brisbane in 2009. Talk about two players, then, going in opposite directions.

Novak took care of business today 64 61 76 (2) to advance to the second week where he’ll next face the Frenchman Adrian Mannarino; the alternative would have been Novak v Monfils, so it’s not quite as bad as it looks; actually, it’s worse than it looks!

Gulbis was up a break in the first at 4-3, serving, but fell-down and couldn’t get up. He soon found himself down a set and buried 1-6 in the second. However, he maintained a glimmer of belief and kept the third set tight and tense. This is somewhat significant, perhaps, as Novak, indeed, had a little trouble closing-out the hopeless, unseeded Latvian.

I mentioned that Gulbis is an “unprepared” opponent. Novak stumbled a bit despite the opportunities to really advance his game upon the unseeded journeyman. Novak’s ROS wasn’t very sharp, though Gulbis does threaten when his awkwardly flat serve hammers the chalk. Novak found himself on his heels a few times in today’s match. That may be all we need to take-away. He won in three, but, as I said, the Latvian maintained hope to the end, and with a win in that third set TB, who knows, as Djokovic, we can all acknowledge, is not out of his own woods quite yet.

Yet he survived and has a gift of a draw to support this recovery. To be fair, Gulbis is a challenge, but not the kind of test that Novak might need to fortify his craft for later encounters.

The match that followed Djokovic – Gulbis was Federer v. Mischa Zverev, which the Swiss won in straights 76 (3) 64 64. This wasn’t much of a match after the first set; and the first set should have been a much more decisive affair than says the scoreboard. Federer was serving 4-2, was broken and needed the TB to decide the opening frame.

The tennis during the TB and into the last two sets was master class grass tennis from the Maestro. Or it might better be called an effortless walk-in-the-park. In the southern California July heat, I had more perspiration sitting on my couch than did Federer. Seriously. I will take this as a very good sign for the Swiss seven-time champ.

More particularly, Federer was anything but brilliant during the first set. That he didn’t close-out the set was a bit worrisome. His ROS, BH in general and overall point construction seemingly lacked polish and execution. This is the kind of form that should worry anyone wanting to see Federer advance and win this tournament against much stronger competition. The ROS was especially bad. Such errant tennis will get him in all sorts of trouble, later.

The second set proved to be a much better case for Roger. Especially in the department of ROS. His early break in the second was leveraged on his brilliant ROS and other kinds of shot-making that brought back all kinds of classic Federer grass legend.

There was a bit of the same feel in this match that I sensed in the Halle final vs. Mischa’s younger brother. Did the opponent lack form and execution or did Federer impose his will on these two? Surely a bit of both.

In contrast to the straight-set Djokovic win, this one felt more like a suffocation, Zverev looking less involved as Federer grew more and more confident and brilliant with some of his exhibitionist shot-making (volleying, passing-shots, ROS, variety, etc.). He didn’t, literally, appear to break a sweat. That’s the biggest take-away: that he found the close-out against a decent grass opponent with this sort of ease. The match gave Federer some good looks at working his BH pass and other improvisations against a mobile and smart S&V veteran.

Djokovic struggled, on the other hand, imho, to close-out a challenging yet error-prone wild-card.

Of course, the next match will tell a different tale, perhaps.

Up-set alert: Mannarino in a five-set epic over Djokovic (you heard it here first). 😉

Federer gets Dimitrov, then Zverev the Younger or Raonic. Wow.

You Fedfans out there, I feel your confidence from today’s match. The TB and second and third sets were vintage. And I even got the sense (articulated by Utsav) that Federer might be holding-back a bit, or angling to play into final-four form. Today was a yawner, in the end, despite that break back in the first that kept the German alive and well. But the way he steadied the ship and really demoralized Zverev seemed as effortless as it was definitive.

But as I tweeted after a brilliant volley exchange in the first set that Federer won and had the crowd and announcers wet and wild: “That beautiful volley at 30-30 has zero significance in this tournament. He needs to choke his competition, not dazzle them. #Federer.”

I suspect Ljubičić and Co., are making this point, moving forward. Dimitrov,  Zverev/Raonic, and Djokovic will be more dangerous, more unforgiving. Again, I’m comparing the tennis I see in these earlier rounds to the fierce consequence of those deeper rounds. 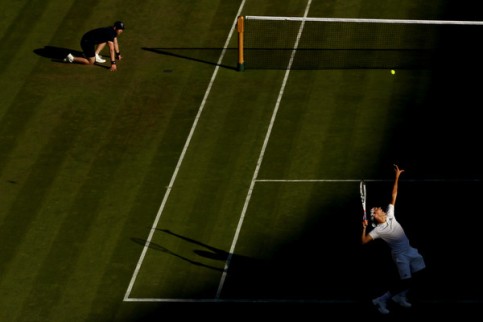 Tomorrow’s off day will see more from Mcshow Tennis with regards to some of the other final 16. The Thiem v Berdych match is a bit under-the-radar, but could foreshadow all kinds of meaning on the Serb’s run for glory.

Also, Nadal v Muller and Cilic v RBA are interesting matches though we tend to lean toward a last tune-up before the Cilic v Nadal must-watch. Imagine that.

Querrey v Anderson is a big serving of a big serve grass clash, and let’s not forget about Murray who certainly should advance.

8 thoughts on “Federer and Djokovic R3”