Nadal is up two sets to zip over Thiem as I begin this post, 63 64. I’ll have to re-write this if Dominic comes back and makes this really really interesting. But I really doubt that’s going to happen (the match has thus ended, as I edit this, with Nadal closing out the final set bageling the apprentice).

Nadal is giving Thiem a clay lesson on the Court Philippe-Chatrier at Roland Garros today. Not sure many of us saw this, which is almost like the Djokovic Thiem Rome SF a few weeks ago. There were a few short breaths of competitive tennis in the first two sets 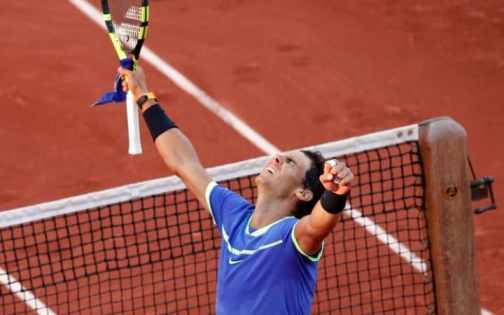 today (I didn’t eve watch the third set — it’s taped 😉 but the early advantage in both two sets pretty much set the tone, a clear irrefutable tone. Rafa has out-played the youngster throughout. Even from the baseline. We have seen Rafa come to net, but really this is actually more a part of his game than people think; I just thought he might need to do it a little more given the Austrian’s strength from the baseline. But the 9-time French Open champ hasn’t needed to as he’s out-hitting the Austrian from the baseline.

The summary is Rafa out-hitting Thiem (out playing him really in every way) and Thiem coming apart due to over-hitting, over-cooking his shots (too often and at that wrong time, which is pretty much saying the same thing. The apprentice needs patience like all of us apprentices need). He needs to take something off many of those ground strokes, play more maturely. A pretty obvious observation, sure.

This was the same formula in the Wawrinka match early on. He was so intent on finishing the point with his big Stan muscles that he got pretty embarrassed in that first set; for a brief moment he had a serve for 5-2. Lost the set in a TB, a set rife with Wawrinka over-hitting and error committing. Murray looked the steadier of the two.

The way the match developed, and to temper some of my criticism of Stan, is Andy played some very good tennis, very good major championship tennis. With his over-lord lording over the proceedings from the player’s box, Andy is a legitimate major championship men’s final four ticket; he’s worth the price of admission despite his tendency to chirp and bitch at the tennis gods (he should just look obediently to Lendl’s shade-covered glare between points and download the appropriate program – as Lendl is to Murray’s tennis as God is to this imperfect world of humanity).

Murray seems to have gotten his tennis going in the right direction. I suspect he will be quite the factor at The Championships at Wimbledon.

The Brit did bring that “defensive brilliance” I mentioned in my caveat to the prediction in my preview, but more to his credit: he out-hit the Swiss at times, showing some comparable offense and just gutsy tennis during critical moments of the match. Maybe I’ll post some of my tweets later, as I was chirping a bit.

So I have to qualify my criticism of Stan because Murray played valiantly, only finally going away in the fifth, 1-6. Murray is fit, but Stan is a tennis bully in these big matches over the last few years. Incredible really. He did this at the 2016 U.S. Open, where throughout the draw he would come-out slow, lose a first set, likely. Then wear-out his victim. Brutal tennis.

I don’t think he had his “A” game at all today, however. He needed that fifth set in a bad way.

Indeed, this first SF was a roller coaster, in the end Wawrinka surprising me as I had doubts midway through the match as the Swiss 3-seed decided it was time for an unforced error harvest, in June for God’s sake.

Wawrinka is an enigma, to say the least (an entirely advanced discussion for another time). He stumbled and bumbled through this until late in the fourth and the fifth. I was 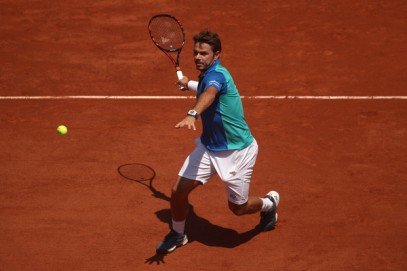 not overly impressed though from a point-to-point read there was some truly magnificent points where these warriors showed real character and tennis genius.

We have the final that we predicted and wanted, so no one’s really complaining over hear: Nadal vs. Wawrinka.

I’ll push myself and write-up a little preview later, but I’m afraid there’s not much to say (of course, I will find something to say).

Lastly, in both matches (in both cases), here’s one of the thoughts I started to grapple with: the one-handers are posing an interesting philosophical question about the existence of a dominant one-hander on clay. Is it simply not to be?

We had a nice little offense-first one-hander vs. the classic two-hander defender parallel in both matches.

Like I said, what adds to this parallel is that Stan and Dom suffered a bit of what may be inherent to the one-hander – a riskier brand of tennis that has trouble sustaining and surviving in these clay street-fights that can go on and on and . . .

Stan and Dom, we all agree, have the brand that will sell a championship level tennis at Roland Garros (Stan has already proven this). But both styles made me nervous today.

Actually, I do look forward to exploring this final a bit later.

And sorry if some of this seems a bit wayward – I’ve had about 3 hours of sleep, am fighting an addiction to tennis and am writing these before the last ball has even scurried into the net.