Hopefully you read my reaction to Thiem crushing Djokovic’s dream of a return to the kind of championship tennis we saw from Novak back in 2016. To be clear, not that any of you are not aware of my general concern for all things men’s tennis, this slump/collapse/decline of Novak is fairly troubling. Though I am not a big GOAT guy (although I am more than happy to chime-in), I do look at the top of the tour in that

grand historical context. What has happened to Novak, such as losing control of his reign mid-year 2016, losing the USO final, the WTF and his #1 ranking at that point was practically careless. Big picture tennis says you have to close the deal on 2016 there, at least win the WTF and maintain #1. If that wasn’t bad enough, the slide has continued (gotten worse) in 2017: the tennis, the health of his tennis family, etc. What a disaster.

This, as I have been arguing throughout, affects massively his prized tennis legacy. Hearing his fans come forward with all of these claims of most rigged draws, best results overall on all surfaces, etc., is too little, too late (and too lame). If he doesn’t lose his way in 2016 and continue that decline in 2017, he’s in an entirely different place.

We have wanted to give Novak the benefit of the doubt, suggesting he would have enough perhaps to get by Thiem in Bo5, for instance, rely at the very least on your fight to survive and advance in that great Djoker fashion. But he’s, clearly, in no such place.

The slide continues and no one knows what will happen to this tennis great moving forward. No one. He is searching, wandering almost aimlessly it seems.

His tank of the third set was startling and definitive of this lost cause that is Novak Djokovic. Agassi gave him a bump in form, motivation, but to battle deep into these draws and withstand the kind of competitive savagery that is a Stanimal, Nadal or Thiem, not to mention a Kyrgios or a Federer this summerer (ha!), Djokovic needs stability and confidence. Where in the hell did that go?

We have discussed these slumps that are characteristic of Novak’s career. He won his first major in 2008 and the next one in 2011. Following the 2011 masterpiece, he struggled to get to 2015-16. So this is not necessarily an unprecedented drop in form from the Serb; but, at the same time, this is different.

Glance about the court during that QF with Thiem. Djokovic’s box is barren, but for his seemingly perpetually disgruntled parents, the well-behaved younger brother, the sinister wife (sorry, calling it like I see it) and the odd, creepy or dopey (depending upon your view) character that is Pepe, a caricature of some kind of new age spiritual leader, meaning Djokovic is on some kind of spiritual pilgrimage?

Move your eyes to the court and there you have Novak gifting the match to Thiem once he’s fully realized that his dream is crushed, which is probably a good move here in the QF with Rafa and Stanimal (maybe Andy) waiting in two future octagons.

This is sad, folks. I’d welcome the task of resurrecting Djokovic: firing his parents, the wife and her pet Pepe, and putting together a solid coaching and support staff (that he probably shouldn’t have fired in the first place).

Unfortunately, I’m not in that position. Good luck, Novak. Watching you tank the match like that was pretty piss poor. The last impressions I have of the Serb are informed by those two images above.

Did you see the Wawrinka v Cilic QF? I thought Marin might put forth a bit of a fight, despite the brutal H2H with Stan and the Man’s recent run here at RG. But this was a man playing a child. Everything about this had mismatch written all over it.

Stan’s huge serve (closing-out the first set with a booming ace, for instance) and FH right now are the bread and butter of his dominance and always have been. The problem for his opponents, especially those unlucky to play him in a major final, concerns his adding the BH (blooping and assaulting CC and unplayable DTL) to this hearty fare of bread and butter. Stan keeps things pretty simple and it’s a devastating brand of tennis.

But again: when he’s got both wings going, hitting lines and serving well, he is a mature, potentially angry and punitive sort of opponent.

Nice to see Andy get through the beatable Nishikori; dropping the first set and coming back to win definitively has to bode well for the Scottish no. 1 seed.

So who do we have here? At this end of the draw, we’re in near coin-flip mode. Never the less, Stan just seems so stable and destructive right now. He hasn’t had to work very hard in these wins, meaning he hasn’t dropped a set. However, this is a guy who’s pretty comfortable going 5. He’s fit, which has generally been the case under Norman, who was always one of the fitter guys on tour.

The ball striking seems so pure and powerful – and he wants to avenge last year’s SF loss to Andy. We’ve come to know this version of Stan and believe he’s probably the one to advance from that top half of the draw.

The only qualification would be Andy’s most brilliant defensive tennis showing-up to go along with some flatter ground-strokes that can hurt Stan. If Murray is going to sit back there and lob short balls at the Swiss, he’ll get pummeled. But if Murray can play backboar

d and frustrate with some deft use of the drop, effective serve, etc., who knows. I think we’d have to see, in other words, a bit of a drop from Stan. I feel like I’m wasting words here a bit. Wawrinka looks finals-bound.

Think about how this tournament has unfolded:

All four of these players call clay home (Murray’s welcome mat is only somewhat newer). This is the most ideal final four we could think of, perhaps with Goffin replacing Thiem for those fans of the Belgian out there. But Thiem’s rise has been more dramatic, as he’s younger, has a fantastic style (old school, brash), a tremendously gifted game, especially for this surface. Murray has risen to defend his ranking, finally. Wawrinka finally shows us the goods, which usually does occur when the stakes are highest.

And in this year’s version of the French Open, we get what has to amount to the glorious swan song of Rafa, at his favorite venue, coming at the close of a throw-back and amazing clay court season. Seems like old times, right?

Ladies and gentlemen, this is called — as I would hope you know by now — 2017 Fedal.

Rafa’s run has been obscene. The scorelines are scary. We know this. He’s marching toward La Decima. We know this, as well.

What we do not know is how this SF vs. Thiem is going to play-out. Lets’s cut to the chase.

Nadal is favored and should be. His magic around this court, his experience and incredible mastery of the competitive landscape is legendary. In other words, for all the brilliance and youth that Dominic will bring to this battle, Nadal will probably find a way.

He will need to use the entire court, which is fine since he’s become one of the better all-court players, to be fair. He will need to come to net, actually, vs. Thiem. These will be 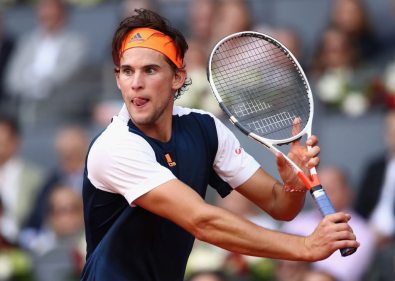 opportunistic attacks. Watch how this plays-out. Djokovic was dead in the water sitting back there trying to predict and counter the Austrian’s big artillery. Nadal will move.  I am almost certain of this. He has to come to net, keep Dominic off-balance and finish points earlier. Federer will find much pleasure in watching his friendly rival battle this young clay master, using this more mature style. This has been part of my criticism of the Serb: his game, wait for it, is limited. Tough to age in this sport sitting back and retrieving all day.

On the other hand, the Austrian has a bit going for him. He has now, attribution here goes to one of the TV commentators, scalped all 4 of the big 4. He fears no one. He beat the Spanish King in Rome a few weeks ago, in straight sets. This came from a series of matches with Nadal in which he made small adjustments that enabled him to close the gap and finally break-through.

You have seen my take on his use of the DTL. This is CRITICAL to Thiem’s outcome. If he can successfully employ this variety in his monstrous baseline attack, Rafa is in for a long and bumpy ride.

What is the most devastating aspects of Stan’s one-hander? DTL. Roger’s? DTL. The CC shot is obviously effective. But Thiem has to mix-in the DTL, which only finishes most points since he’s probably pushed his opponent off the court wide on the deuce side (speaking of his BH DTL). This is true of his FH DTL. CC is great, and necessary, but he has to use the DTL to wear-out Nadal. Keep your eye on this dynamic.

I don’t have the stats in front of me here, but Thiem is hitting the ball and spinning the ball harder than anyone else at this point, even Rafa. 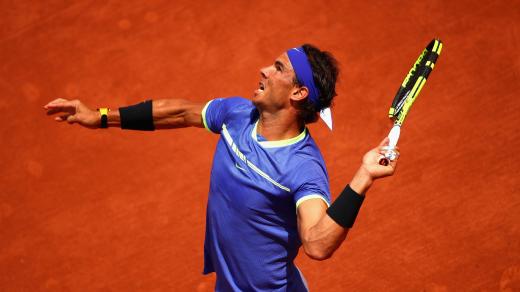 Sure there are many many more factors. The serve will be critical. The ROS could be a deciding factor, especially if Rafa can get into Dom’s service confidence. A break of serve here and there could decide this.

And of course many of you are probably saying Rafa will just pound Thiem’s one-hander. Could be. But they’ve played recently. Adjustments have been made. Still, that will be something to watch.

Lastly, although this has been implied throughout this post, the mental framework of this match between Nadal and Thiem will be interesting. Thiem caught a break in the QF because Djokovic is broken and the Serb quit in that match (this is quite disturbing for many out there – that he would tank like that); Nadal will not resort to such a thing. No way. The Spaniard will be a nightmare, mentally, I suspect.

Can Thiem keep maturing before our very eyes? For instance, he has to pick the right times to hit DTL. Not when he’s getting pushed back and trying to stay in the point. He has to be smart in how he employs this variety and his approach in general.

The mental strength of these players, all four, will be on display in these next two matches.

Obviously, there is so much more to consider, but I’ll leave it there for now. Let me know what you think of the matches. I’m afraid to say that my gut tends to side with the tennis great here, so I see Nadal surviving . . . and playing Stan in the final. Holy shit that could be good.

Then again, we have a phenomenal final four (Thiem could be defining his rise to that stature this weekend). The tennis stoke is strong with these four, and with this tournament, which I hope you’re feeling with the help of Mcshow Tennis.