I wrote a series of posts last year arguing that Federer’s role in this golden era, in the history of tennis for that matter, has been very consequential.

I left-off needing to deal with the Djokovic effect, his role in this era (again, Roger being the cause of the Serbian serpent of lithe lethality). 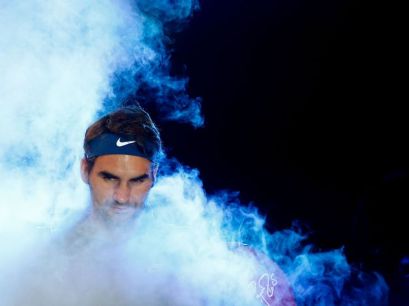 My plan now is to figure-out exactly what more I need to write to finish and package this short E-book of sorts. This could be extended into a longer, more traditional book format, as well. Do I want to sell it? Sure. But for now, I am just writing, watching, writing, watching and reading this glorious game.

But what I want to touch-on briefly here are some of the ideas people have about Roger playing his greatest tennis now, at 35.

Let’s say I concede this point and say Roger is playing his greatest tennis at 35.

Okay, I’ve gathered myself. We hear the point being made that players’ careers are being extended into their 30s, that there is a kind of late blooming in the men’s game. Wawrinka, Lopez, Karlovic, et al, are proof positive that this trend is rampant and the arch of a player’s career will extend beyond the “wall” that has been the late 20s and early 30s. Using, then, just a bit of playground logic, this means that other players like Djokovic and Murray (tough to say Nadal’s tennis is on the ascent) could/should/might play dominant tennis in 3 or 4 years? That would still keep them shy of Federer’s 35 going on 36, but I’m willing to play along here. 😀

Djokovic will be vying for #1 in the world, winning a major or two, Masters tournaments, etc., in four years?

First of all, I don’t need to argue here that Federer is NOT playing the best tennis of his career right now, in 2017. Just on the surface that’s ridiculous. But we’ll look at this with more depth in the coming weeks (as I find time to delve in given our week-to-week coverage of ATP fireworks).

No, that argument can be clarified later, and needs to be since bloggers and even guys like Brad Gilbert are under this spell of Federer’s ruination.

Instead, just think about what you’re comparing, making a huge leap to this vague notion that players are peaking later in their careers. Djokovic in 4 years (which only puts him at 34, by the way) is having a similar kind of significance on tour that Federer is now?

Or the likes of Dimitrov, for instance. In 10 years he will be 35. You think Dimitrov might be part of this rampant late-bloom of professional tennis talent?

Folks, this is some seriously flawed reasoning: because Roger is dominant at 35, and players do seem to be playing with more relevance later into their 30s, we can expect this trend to continue and argue, in fact, that father time has massively reconsidered his identity and meaning in life? Ah, that’s a great title for some of this discussion/argument: The Identity Crisis of Father Time (or Mother Time, either way). 😉

The point, of course, is Federer is ruining tennis! I use the exclamation point not to soften that statement with some kind of sarcastic tone, but to emphasize, announce with more force, the point of this phenomenon.

As I think to finish that series of articles (HRFRT), think of what 2016-17 will do to this argument?

Today’s post is a brief reminder, as you begin your weekend, that this 2017 Federer is not as much about the men’s game (as many will have you believe – that today’s nutrition and technology and science will have players peaking into their 30s). No no no. This is about Federer. He is a singular talent.

What bothers me is how his success (because of his talent and love for the sport) wasn’t able to affect other players. Like Sampras. Sampras was burned-out by 31. He’d climbed the Mt. Everest of tennis by then. Federer would have changed that (Federer created monsters). Federer changed the entire narrative and expectations of the sport.

But now we have a possible epidemic on our hands of unrealistic expectations. Thank Federer for that.

We’ll eventually move to a more specific comparative analysis of the younger and older Federer, the athlete.

8 thoughts on “Federer is Ruining Tennis”