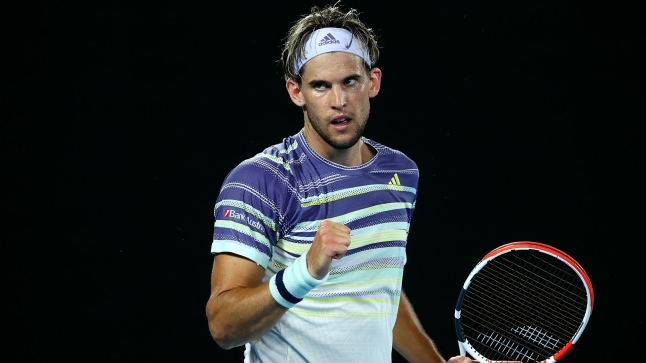 We split on these last QF match predictions. If I was told I had to come-up with my “sure bet” from yesterday, I would have leaned Wawrinka to take-out Zverev. The Thiem win is as big as the drama that unfolded in that later match. Holy shit.

A little bit on this Wawrinka vs. Zverev match.

I missed on the Zverev vs. Rublev, as well. But here’s what I said in that short preview:

I’ll just say I expect [Rublev] to get through Sascha. Moreover, if Rublev is playing to recent form and the German wins, potential breakthrough match for Zverev at a major. What I have seen of Zverev (vs. Gerasimov) was not very impressive, but he does appear to have man-handled Verdasco.

I might be a little pre-mature on the “breakthrough match” nomenclature for this R16 match; however, Rublev has been among the hottest on tour, two titles already coming-into Melbourne and this form extends back to 2019, so we’re not really talking about flash-in-the-pan form from the Russian. In other words, that really was a big win for Sascha, in my humble opinion. And his serve and all-court presence shows in that match against Andrey.

In my preview to Zverev vs. Wawrinka, I liked Stan, no doubt, but I did say this:

Wawrinka should be thinking of one simple approach here tonight: get this match deep into a fourth or fifth set. This approach worked marvelously against Medvedev. If Zverev has his serve in tact, he might be tough and victorious. I watched him coming to net in some highlights against Rublev. He played this kind of confident, attacking tennis when he beat Federer and Djokovic to win the 2018 WTF.

The German’s serve was off-the-charts yesterday, ~80% FS for the match and in that 2nd and 3rd set he was going into hitting 90% on his FS. When you factor in that these are not 110mph serves, but rather ~120mph, on the T, etc., Stan was helpless. So, with that “serve in tact,” Zverev proved to be virtually unplayable. Look at those numbers. And as everyone has been asking, scratching their heads, where did this form come from, in that a few weeks ago at the ATP Cup he was dreadful, especially on serve. In 30 or so service games during that tournament he had 30 or so DFs and crashed-out of every match he played.

Anyways, after that first set steamroll from Stan, Zverev found his range, and routined Wawrinka. Some of us thought maybe Stan could find enough to get the match to five sets, like he did against Medvedev and then things could have gotten a bit more interesting, testing the German in those darker alley-ways of major championship tennis. Stan was done, of course. The earlier, hotter conditions had an effect, most likely, on his energy (coming-off a five setter vs. Medvedev, as well) as well as the ball, bounce, etc.

But either way, the 22 year-old advances to his first major SF. Congrats to him and bravo on that stellar form. Can he continue to serve like that? This is a huge factor in his match vs. Thiem.

I have to admit, while Johnny Mac conducted his familiar conversational post-match interview with Sascha, I thought to myself, upon being reminded that if Sascha wins the Australian Open, he’s committing his entire championship earnings to bushfire relief, he has to win! That’s in the realm of $4 million and the morality of this gesture is even greater.

So, I’m here to say: we are all rooting for Sascha to win this thing. Brilliant stuff. His explanation of this decision was a great listen, was genuine. At this point, he’s donating $10,000 per win, I believe; so, he’s already doing a tremendous service to Australia’s seemingly interminable fight against the fire friendly climate that’s literally wiping-out so much precious life and country.

As for the night match. Ha ha. Incredible. You know where I’m going with this one.

Just yesterday we were talking about the eerie abilities of the Big 3 to escape annihilation in these epic battles, throughout their illustrious careers. I clearly attributed some of this eminence, this Federer, Nadal and Djokovic greatness, to the failures of the field, of the non-Big 3 contingent. Tennys (Sandgren) had given us our latest illustration 😀

Of course we noted some other recent examples, one of which was the Thiem vs. Nadal at the 2018 USO QF. Thiem jumped-out in-front 6-0, got it to a fifth set, went shot for shot, but came-up short, like so many players who have competed against the Big 3, who somehow, someway go belly-up when the time has come to cross the finish-line, ascend the mountain, destroy the incumbent king who’s grown old in time and fortune, what-have-you.

And there we were again last night.

Thiem actually gets the better of Nadal in the first two sets, by coming from a break-down in each and proving a bit more clutch in each tie-break. But one could still feel, despite Nadal’s history of coming from two sets down in a major (last happened over a decade ago, I believe) that Thiem was not out-of-woods. Shit, based-on my discussion of this “Big 3 destiny, resilience, and myth,” no way were we going to give this to the Austrian yet.

He loses his serve in the third, of course, and Nadal methodically closes-out that set, without wasting much energy. We move to the fourth. Go back and watch that 2nd game of the 4th, I believe, Thiem serving at 0-1. He fights-off a couple of BPs; one can absolutely feel the Nadal freight-train starting to pick-up steam: we seem destined, at least, for a fifth set, no?

But Thiem holds. And then we get the boomerang break. Thiem holds again, so he’s out-front 3-1. We see this advance until we’re at that moment: he’s ready to cross that bridge, slay that dragon, serving for the match at 5-4 in the fourth.

You knew it was coming. I certainly did. Thiem had tightened, had become this aspiring tennis great, one of many, who somehow “shrink at the prospect of beating these [legendary] greats.”

We go to 5-5 in the fourth. The match gets to a third tie-breaker.

Thiem has the match on his racquet again, serving at 6-4 in this TB. He has the short ball on his FH that he dumps into the net. Brutal. He turns and barks at his box. He’s failed again to extinguish this legend. All of that Roland Garros loss, 2018 Arthur Ashe is ringing in his ears, as well. He’s blown multiple MPs at this point. Unreal.

Tennys in the golden era has been an almost bizarre, never-ending fantasy or nightmare (it’s too punny, sorry 😀 ).

And let me leave you with this bit of irony that can ring both optimistically and quite hauntingly, as well.

Thiem did not put Nadal away, didn’t exactly finish this match on his own terms or racquet — though that CC BH onto a net-approaching Nadal that skimmed the tape and landed in at 6-6 was an incredible shot!

Nadal, of course, dumped his FH into the net on the next and final point.

Optimistic: the greats are vulnerable (of course they are but you know what I mean) and a non-Big 3 bloke broke through!

Haunting: Thiem didn’t exactly put Nadal away, on one of those multiple opportunities that would have certainly felt a little different. Is this still a mental mountain he still needs to climb, in Paris in the spring, or elsewhere?

In the end, however, either way, Thiem moves-on. An incredible match, another brutally physical match which is Nadal’s code of ethics. Thiem has inherited this mantle of tennis. With the one-hander, Thiem’s game is especially interesting, sophisticated and dangerous.

How about that form from the Austrian in the first two sets. Good Lord. He couldn’t quite maintain this for more that two sets, but he ended-up with enough to take-down Nadal. But those FHs and BHs, his play at the net, the serve — so big, such a pleasure to watch a guy so committed to this kind of power tennis. No question: he beat the Spaniard.

As for the suspected short-comings of Thiem, namely his overly defensive posture, that could have doomed his chances, Nadal ended-up the one who struggled coming-to-net. The Austrian had a great strategy, of coming in, finishing and adding that range to his already classic game.

We have the old-guard in the first semi-final, two central pieces of the Empire, which tosses at around midnight PST.

Followed by the sport’s version of A New Hope, Thiem vs. Zverev. The following day.

As we said earlier, we like Djokovic in this evening’s match. Needlesstosay, a Federer win would be a staggering development, a monster upset. We’re not even sure of his health.

We’ll reflect on Federer vs. Djokovic 50 tomorrow with some thoughts on the second SF.

Who knows: I might have a bit more to say about this 50th episode of the Empire continues to Strike(s) Back later today.