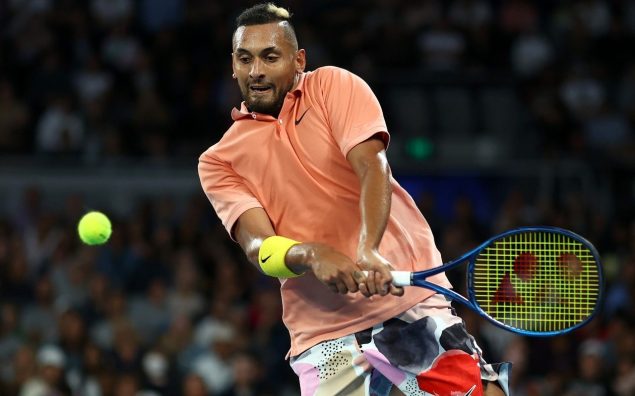 I should save this for last, but we’re going from top to bottom. This is exactly what we wanted when we saw the draw. Khachanov’s stock has dropped and Kyrgios has made the 4th round of a major, set to play Nadal with whom there’s been past drama and decent competition, dating back to that 2014 R16 Wimbledon upset of the Spaniard that probably went to the Aussie teenager’s head. The H2H is 4-3 to Nadal. Hopefully the match is that close, but we have to caution against much expectation, given the Spaniard’s brilliant preparation for such matches and Kyrgios’ expected collapses. I wanted this match in the ATP Cup, scolded Hewitt and Co. for the mismanagement.

Nadal has looked strong, but what does one expect and some of his play vs Delbonis looked less than elevated. He got a walkover from Busta Rhymes, so let’s see a good test for the world #1. Kyrgios, coming-off of a five set, 4 hour and 26 minute mega match (flush with a super breaker fifth), might be overdone. With his country behind him, hopefully he’ll rise to the occasion.

Nadal will be very difficult to beat here, but Nick does have the game to do it.

For the sake of the Kyrgios’ recent rise in character, let’s see him advance, though even a great match would help him in this greater cause. #bushfire

Haven’t needed to watch Monfils as he’s always got the flair and the athleticism for some solid tennis, especially with a last year-or-so bump in maturity (seemingly). He hasn’t had much to get through to arrive at this match with the aspiring one-hander, one of our favorites.

Thiem’s road has been a little bumpy. I saw him just have enough to get by Bolt, who turned-out not to have enough, a diet of Futures matches failing to prepare a guy for a five-setter against a top-5 player.

Thiem’s back court depth haunted him in that Bolt match, who used some Aussie-born S&V to punish the Austrian. Come forward, Domi! Step to the cause!

I like Thiem in this one, or I should say, I beliem in Thiem.

The Russian is coming, still. I’ve seen a small sample of Daniil’s continued excellence and now he gets an inspired Stan. Getting the retirement from Isner hopefully gives Stan the needed energy to make the Russian pay for his awkward court position.

As we know, Stan needs the ground strokes to be absolutely firing, solid serve numbers and even more inspiration from the crowd. As we know, however, the more crowd support Stan gets, the more Medvedev feeds-off such music.

All of this BS crowd support mumbo jumbo aside, Stan needs to be fully adorned in his Stanimal outfit to get through the steady and severe Russian.

Wawrinka, on a whim (I can’t even really buy that myself).

I don’t quite see the Rublev defeat of Goffin as an upset. This Russian has been too good recently. I’ll just say I expect him to get through Sascha. Moreover, if Rublev is playing to recent form and the German wins, potential breakthrough match for Zverev at a major. What I have seen of Zverev (vs. Gerasimov) was not very impressive, but he does appear to have man-handled Verdasco.

Remember this American made the QF at this tournament in 2018. This is a toss-up, even though the Italian should have the fire-power and the experience to move-on. You just never quite know with Foghat. He barely got through the first round. Nonetheless, the disgruntled 12-seed can play. But can he play Tennys? 😀

You have to like The Maestro in this one, but he looked terrible against one of his assassins in that last match. Federer looked like he’d just woken from a nap. Looked quite beatable. Millman is certainly a fighter and does have some belief, but there appeared to be all sorts of problems with Federer. Him saying prior to the match that his loss to the Australian at the 2018 U.S. Open had no bearing on this match was ridiculous. Trying to trade forehands (or even BHs) with the stronger Aussie, getting nowhere with these exchanges was ridiculous, as well. When he brought Millman to the net, much better results for the Swiss. His second serve numbers were awful and he simply had too many rushes to net following weak approaches that looked too much like that 2nd MP at WB vs. Djokovic.

Bad look, all the way around. That he came back in that fifth set (from down a break and down 4-8 in the breaker) is off-set by all of those other things.

Does he straight-set Fucsovics? Who knows. Probably a four or five-set win.

I will not be writing much about a Federer loss here. He looked that bad vs. Millman.

This damned Hungarian (who has a solid game) beat my boy Tommy Paul! How about that call for the American to beat the other Federer assassin (Dimitrov)?

Federer has a marvelous draw to the SF. Can he blow this, really?

Raonic is steam-rolling his draw. Look at the scorelines. You knew this would be tough for Tsitsipas. He’d never seen the Canadian. A lot of people forgot about this giant, who seems to be fighting injury so often. But we know the serve is literally deadly. He also seems to have let-his-hair-down. Milos looks very much like a guy who wants to do as much damage as he can, with much experience in majors to pull from, and a bit of that “fuck you” to the rest of us for getting so excited about Shapo and FAA. Look for more of that FU from the Canadian as he takes-on another giant.

Cilic has played some good tennis, but two five-setters, back-to-back, and the grudge tennis being played by Milos has me saying Raonic into the QF.

Granted, just as I called the Paul over Dimitrov result, I missed mightily on my even minimal interest in the Fokina vs. Schwartzman match.

Diego can be a very tough out, but I suspect Novak understands this quite well. Maybe some tougher sets in straights or four-sets at worse: I like the Serb to win and move-on.