My delay in posting is because of work and because this tournament has very little intrigue other than wondering if one of these blokes has enough character to beat Rafa with his bag of tricks on full display at this depleted U.S. Open.

Nadal is shameless. His time violations are well-documented. This particular “trick” is actually an offense that could be enforced, punished, etc.

Some of his other “tricks” are just pure rubbish, part of his “style,” his “insecurity,” in that gray area of sport etiquette.  Some of this rubbish people fail to identify because they either A) don’t understand etiquette or style, or B) remain too in awe of a player committing these offenses to take a stand.

Standing 30 feet behind the BL is embarrassing; if he could convince the tournament to push the stands further back, so he could stand further back, he would. I was delighted to see him maintain this ridiculous ROS court position against 5’6″ Diego Schwartzman.

If you played an opponent who lined-up as far back as they could, you would hopefully resort to a shorter serve, perhaps come to net to smash this petty gamesmanship. The ATP peasantry refuses to cross this great champion, to take a stand against this offense to common sport decency, class, etc.

Moreover, when he does get the ball back in play, with a high floating cut BH, which his opponent fails to punish, the rally ensues, which means Nadal is going to grace this exchange with his glorious moon-balling. Truly embarrassing stuff.

But in that gray area, so one can’t really complain to the umpire, etc.

What if your opponent moon-balled the crap out of your rallies?

Indeed, this is crap.

The Spanish faithful or the rest of the Rafan Club will certainly say, “you sound sour, sore, bitter. He is the GOAT; he will finish with the most Grandslam titles.”

You who say this, who offer such a rejoinder to my Nadalism commentary are a fanboy or fangirl who has lost the plot on this sport.

Federer ruined tennis. The argument is fascinating and brilliant — and I’m the only one who can write it. The obsession with titles, winning at all costs, etc., has ruined this sport (at the professional level). Don’t get me started on Serena.

Dimitrov’s cameo here is pathetic. You have read my commentary on Grigor‘s tennis, no?. Forget the BabyFed bullshit. This guy can play tennis. As recently as late 2016 – early 2017 the Bulgarian was flying, playing some brilliant tennis, again.

But he went away, of course. His results coming-in to 2019 NYC are bad; he should not have been on anyone’s radar.

Why is this magnificent 2019 NYC form such a miserable state of affairs according to me?

It’s because he beat Federer, Mcshow — you wanted Federer to win!

This form is over-rated because he has nothing to lose. Working with Agassi and Štěpánek certainly appears to be helping the Bulgarian, but this run is devalued by me because it’s a one-off. Dimitrov will go-away next week. Bye. Thanks for the memories.

Unless the Russian drops in form because of timing (these runs don’t last forever) or injury, he’ll strangle the Bulgarian in today’s first SF. Dimitrov’s one-hander will have to be out-of-this-world and his second serve will have to remain top-of-the-class.

I would be both surprised and proud of Grigor if he can manufacture a win here today and perhaps go into the final feeling very good, confident, etc. No one would like that more than I.

But I see the Russian mob squad bringing the Bulgarian face-to-face with his short-comings, his failures.

Again, I root for the Bulgarian, but I have values: I don’t see him able to back-up such a win against Federer because of his mental and physical (lower) class; he won’t have the nerves, nor the depth of his game prepared again to overcome such a foe.

But I’m rooting for him.

That’s what most fans can’t get through their fantardation. I don’t live and die on the success or failure of one player.

Which brings us back to Nadal.

I’m not afraid of Nadal. Nadal reminds me of me. I respect some of his views of the game, of competition, etc.

But his tennis is rubbish.

And the guy is gifted like no other in terms of the magical “objectivity” and “randomness” of the draw.

This 2019 draw is an absolute shit show. As is his ROS, as is his moon-balling. There’s a lot not to like about Rafa. I’ve already acknowledged there is some of his character I do like: but there is a lot not to like. If you don’t understand this complication, you’re a simpleton, a fangirl and/or you don’t give a shit about any of this. In which case, go read the ATP site or Tennis.com or hang-out on Twitter and get high on vacuous verbal vomit. 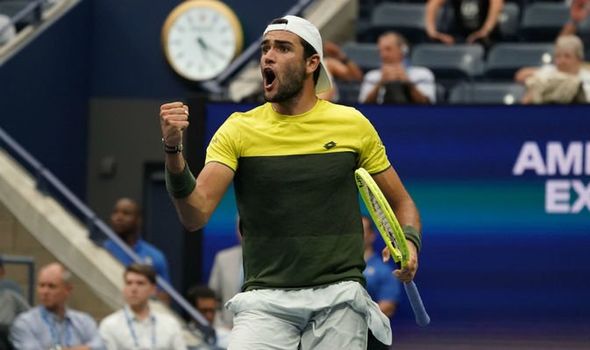 He’ll have to take the racquet out of Nadal’s hands. He’s a big guy with a big game, which includes some variety — everyone knows this.

But for Bo5, he has to beat the Spaniard down, forcibly remove hope from that fearful camp.

Rafa looked less than rampant against Schwartzman. I have an explanation for this.

He was trolling Diego and you, the tennis faithful. Oh, Rafa, you can do this? There was tension, a little uncertainty. He lost two double breaks in the first two sets.

If Rafa doesn’t win this U.S. Open, he’s battling Federer for the biggest choke of the year, of the era.

This is a gift for the Spaniard.

Enjoy the fruit and my commentary after today’s Semi-final matches!