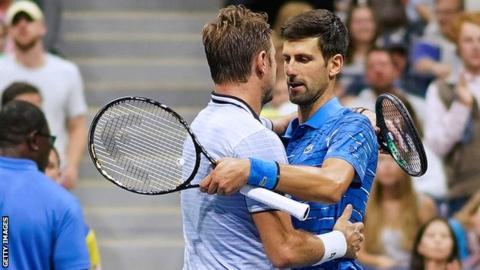 The bottom-half of the men’s draw, the wild wild west we’ll call it, with its trusted lucky winner (a little twist of course since he’s so often associated with a LL) Rafa Nadal at the head of this class (of misfits).

I’m being a little rude, a little insensitive, for sure, but this is only to make a point (made over and over on this site).

So often Nadal gets these draws.

If Rublev had been in this form of his for longer than a couple of weeks, had a few decent titles, even a few impressive runs under his belt, perhaps we’d give a nod to this threat. Not on the radar yet since his claim to fame thus far is beating an ashamed Federer in Cincy and a mentally ill Kyrgios (who really really needs help — I am not at all trying to be insensitive about this: I’m actually worried about the Aussie) in the third round here in NYC.

So, we have Rublev today against the big Italian who’s been on the menu quite a bit this summer, throughout the grass (a month) and here he is, again.

Then the irascible and unpredictable (yet marvelously talented/which I’ve just qualified drastically) Frenchman Monfils vs Andujar?

Really? Good work, Domi Thiem. Practically taints Indian Wells. Really awful stuff from the Austrian, which just soils the draw. Thiem has had an awful second half of 2019; did I hear he’s been injured, or was that a dream? Health is part of the package, I’m afraid.

Zverev — same boat as Rublev. Sure he has a couple of Masters and an ATP Finals title, indeed. But we all know of his Bo5 difficulty, phobia, misfortune. Can’t quite wrap our proverbial arms around this one, though the model of this sports car appears to have at least some quality.

Scwhartzman is Nadal’s teddy bear, so good for them. He probably plays Nadal, after taking Zverev on a long walk.

Which brings us to today’s men’s top billing: Nadal vs Cilic. Cilic is definitely the best of this lot of challengers in the bottom-half to give Nadal even half a push back.

Cilic and Nadal have had some decent matches recently.  Toronto QF 2018 involved a three-setter for Nadal that Cilic had control of early and just went POOF! Before that was a QF in Melbourne (2018) that Cilic did maintain control of, which resulted in a Nadal retirement at 36 63 675 62 20.

Cilic can play five-sets. At least.

You and I know Nadal gets through this match and just FEASTS on whatever NYC serves-up in the QF and SF.

What awaits Nadal in the final is the survivor of Federer vs Dimitrov and Wawrinka vs Medvedev.

That, my friends, is CLASS. The only blip is a somehow rampant Grigor.

And he appears to be free-swinging. The BH looks dangerous, he’s hitting drop-shots, can move around the court — this that full-court game the ancients talked about when Dimitrov was in the womb. Looks like he somehow found his way here.  Good for him.

The other three in the top are heavy weights.

Federer looks settled into this one, Medvedev is the hottest player on the planet, with feathers ruffled by the shit-for-brains NYC crowd, giving him even more purpose; and Wawrinka, a former USO champion, and winner of three majors (only a Wimby crown from a career Grandslam 😀 is playing once again like The Man.

We know Stan the Man is present since Novak wasn’t going away quietly. The shoulder is certainly to blame here for Novak’s poor showing vs Wawrinka yesterday. I liked what I saw from Novak vs Kudla; looked like the shoulder was good enough though the three setter against the American did require some quality. But I thought he’d maintain this run for #17, year-end #1, defense of his 2018 USO, etc.

Stan needed that 2015-16 (even 2017) quality to take-out the world #1. Watching Stan unload on some of those ground strokes, hold his serve like that, etc., is a scary proposition.

With Novak serving in the second set at 4-2, and proceeding to lose the second set 5-7 was a massive sign that the Serb wasn’t to survive this match. Heavy stuff from the other Swiss, indeed.

I’ll get back to some more consistent posts with the tennis securely at this business end of this major.

I suppose I’ll say more later about the crowds, as well, their stupidity and lack of class, knowledge, etc.

A) the venomous garbage that comes out of their mouths often inspires the targets of their hate and B) they look and sound like utter corn holes.

Treating Novak like that (in some of his early round matches, on the practice courts, after his default yesterday vs. Stan) is just laughable (see “A” above).  They have no idea what they’re doing.

Novak doesn’t deserve this kind of treatment at all.

We’ve seen the Medvedev interactions with the fans. We’re rooting for the Russian a bit on this particular point. He’s still playing great on this impressive multi-month run, he’s young, and we need this youthful quality on tour (reasons to root for him); but to watch this unpopular talent hit a flat, deep passing shot, so to speak, up the collective backside of the NYC crowd would be worth the price of admission.

These fans are embarrassing, as if the U.S. needs any more of this politics.

And the anti-Novak sentiment I just don’t get.

Oh wait, I do.  Of course, the fanboys and fangirls don’t help matters, either.

Enjoy the tennis and talk to you on the other side.