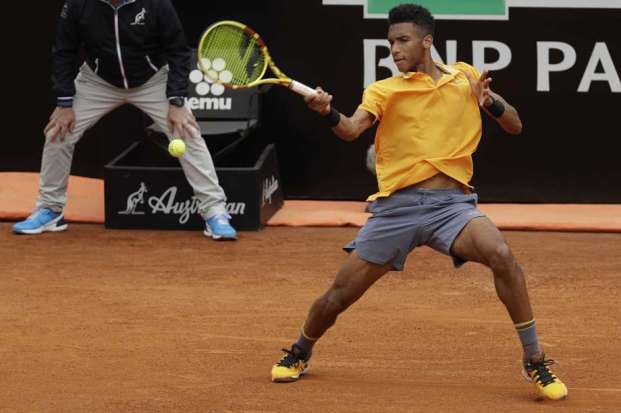 The Canadian prodigy advanced today over the hard-charging Georgian, Basilashvili, 26 76 64.

I caught only the last set (as I was busy plotting my overthrow of Roland Garros and the ATP in general — a virtual laughing stock of an outfit that fanaticism unfortunately has rendered as some kind of kitsch neorealism or dream world cinema).

Basilashvili is what the RG draw defenders will argue adds “integrity” to Nadal’s bracket. He’s a good ball striker of that two-handed BH CC redundancy top-20 type, but he doesn’t have much to really threaten a top player.

FAA, on the other hand, will be quite dangerous quite soon. He had a little trouble today (he’s young and it’s clay) but his bigger serve and stronger athletic game, in the end, overcame the Georgian, who had several break chances in that last set — just unable to rise to the occasion, play any sort of ascendant final-four tennis. He’s much more the blue-collar type who will chalk-up some good wins, earn a good living, but don’t start talking about how Basilashvili is going to go Soderling-like in the 4th round against Rafa.

FAA looking good to face Paire tomorrow in the Lyon final. Hopefully the Canadian pisses-off the Frenchman, out-plays him to the tune of Paire-going-ape-shit and throwing furniture on the court. 😀

He did get by the young American today, but good work for Fritz to get to a SF like that.

Geneva has Jarry v Sascha for that RG warm-up title. I’ll take the Chilean in three 😉

We’re all-in on this lad.