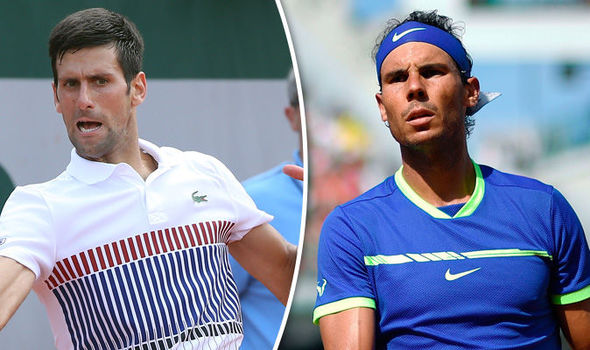 Late re-cap of Rome: my appologies.

But I actually wrote about what would happen in that final between Novak and Rafa in my last post (even suggested HOW that final would play-out), in the preview, before Novak had even secured his SF win over Schwartzman.

Nothing very surprising here as we had read the tea leaves, my friends.

That final (going-in) had Rafa written all over it.
For me, Rome proves to be quite a litmus test for Roland Garros.

He was manic in Rome. He’d become beatable on clay at tournaments he owned, in venues upon which his storied name had been embossed. One-handers were having their ways with him. He smelled Novak growing, could see this Serbian excellency smiling down upon his own struggles on his favorite surface, on which is entire legacy had born roots back in the beginning.

Was this the end of Rafa?

All of this insecurity became the target of the Spaniard’s scramble to find his form in Rome. How did he execute this hunt for his clay confidence, for this fight for his tennis identity?

This is Rafa. He crushes souls on clay like Thor in his rule of Asgard. These kinds of scorelines are Rafa in all his glory, in form and confidence.

We saw a bit of a hiccup in the SF with Tsitsipas. Rafa made amends for his Madrid loss to the 20 year-old, but the Greek still hung-around, still made the Spaniard’s faithful a little nervous.

The other part of this “form” discussion, this scoreline indicator of Rafa’s level, is the related time he spends battling these “weaklings.”

The slower intercourse of victory of Rafa-past has changed, likely with the help of Moya, to a much more efficient, quick-and-easy victory that preserves energy and confidence.

Novak, on the other hand, most likely with Madrid in his trophy case and that subsequent sense of confidence carried into Rome, spent too much time grinding-out wins in order to get to a seemingly important final against his rival.

The first couple of rounds went well (61 63; 63 60), but his QF match with Del Potro and SF match with Schwartzman perhaps took Novak out of contention. He looked quite unstable against the tower of Tandil. Novak saved two MPs. He was on the ropes and the boxing analogy works well here as the Serb looked a bit staggered.

I wrote that this warrior-like fight, seen in the survival and triumph during such incredible high-stake battles, speaks to his legendary tennis character. This helps define this tennis great.

But this doesn’t necessarily bode well for a late date with Rafa.

Part of this off-form is the clay. The surface is a mess, the footing stinks, the bounce can stink, uneven, off-the-line, bad, and the opponents are often hungry dirt-ballers who know this is their time to shine, especially against a top guy. This isn’t the case, necessarily, with Juan Martin, but Novak just got beat-up out there in that QF.

Schwartzman gave him a good run, as well.

So, was Novak doing his best to try to snuff-out any chance for Rafa to find that much needed confidence in a Masters final against the other FO favorite, in a warm-up for Roland Garros? Not sure. Sure the Argentine pair are good tennis players, Schwartzman especially on this surface.

But imagine Novak having the form to beat Nadal in the Rome final? Imagine the state of mind of Nadal with a week-off before his most important tournament of the year, of his career?

The Rome final juggled all of these elements. Rafa brought the manic form, breaking a sleep-walking Novak in the first game and bageling the Serb. That was wild, actually. The tennis leading-up to this predicted this opening frame, but the bagel seemed strangely historical.

Neither had ever bageled the other throughout their storied rivalry; this also seemed to be the message Rafa had for Novak and the field in the wake and rumor of a fading tennis great.

That this came in the Rome final, with all of that context that I scratched-through above and elsewhere (17-15 in majors, 33-33 in Masters, etc., etc.), a bagel there in that first set seemed massive.

None the less. Novak did resist. The second set was brilliant Novak, just hanging around, putting numbers on the board and THIS is exactly how one beats Rafa. He needs, often, that rampant scoreline, that soul-crushing scoreline that renders zero hope, zero chance for this opponent or the rest of the field.

But Novak rose and Rafa retreated in that second set. Another narrative was beginning to write itself in that Rome clay, that Rafa wasn’t able to secure breaks-of-serve, that Novak was, again, staying alive, hanging around, which is a very dangerous scenario for Rafa given the recent tennis between these two (Someone recalled during this match that since the 2013 USO final where Rafa beat Novak, the Serb is 13-3 against Nadal — but this might be on non-clay. The point is Novak has had the Spaniard’s number, so to speak, for quite a while).

But that was the end of Novak. He went away fairly quickly, 61 to Rafa in the third, back on point, having the final word in this part of the story, involving Rafa’s manic form (0 and 1) and the whisper of Novak’s dominance (even in Rafa’s kingdom): 64.

Looking at the match as a whole, one has to see that #1 and #2 (not their rankings, but the two points of this post) really told the story: Rafa was simply in much better form than his opponent. Novak was just off.

The Serb’s overhead reared its ugly head again, negating very important free-points against Rafa. A critical point in that match was early in the third where Novak had another overhead (he’d already dumped two into the BOTTOM of the net), and this one he actually makes — hurray, he did it!

But to avoid further embarrassment, this successful overhead was simply a soft, safe crack at the ball that Rafa easily handled.

Of course the Serb’s drop-shot was equally as bad. And very little BH DTL from Novak, as well. I don’t really get this one. His CC BH is superb, but I think we can all agree that Rafa’s FH is a big part of his resurgence in Rome as this CC or DTL shot is, on clay, maybe the most destructive shot in tennis. The FH looks deep, flatter on occasion, and simply not to be messed-with. Nothing new here. But Novak’s decision to stay on that side of the court during these exchanges did not work-out for him.

One of the big reads too, of course, involved that length-of-point stat. The longer the point, the much bigger advantage Rafa has/had. This points to the Spaniard’s style and energy level.

Rafa eats-up this kind of tennis. If you’re not going to hit him off the court, I’m not sure how you’re going to have any chance whatsoever.

There are so many amazing things about watching a Rafa clay match. He’s so comfortable out there, the ball off his racquet just looks and feels different compared to other players. Sure, a bit like Roger on grass. But this is simply a man in his element.

And maybe no other shot better illustrates this than Rafa’s defensive dig, keeping a point alive, lofting a seemingly deep put-away high into the European sky that lands on his opponent’s baseline. His opponent is crushed on so many levels here. This occurs on several points, probably at a point when his opponent has a clear advantage, a small opening — he’s found an angle, is going to smash this scrambling clay sculptor back into his medieval cave . . .

Rafael Nadal at his best.

This match, in the end, and I know this sounds like I’m drinking the kook-aide — but this is the state-of-the-men’s-game going into Roland Garros: Rafa is the clear favorite.

And, again, Rome tells us why:

Who do you think can bother Rafa in Roland Garros? Novak and Thiem, maybe Tsitsipas? I think more players can bother Novak. To me this is critical. If we get the Novak v Rafa FO final that we all suspect and want, great.

But I think Rafa, like in Rome, will have a much easier time getting to the final, because of his form/style and the draw (which we’re yet to see). He will not fuck-around here, either way. We saw this in Melbourne. We’ve seen this throughout his career.

Novak, however, can get into some serious fisticuffs along the way. Novak has to be in tremendous form. He looked good in Madrid, but that’s about it. Didn’t look especially good at all in Rome. Before Madrid, go back to Melbourne to find that form he’ll need.

Novak needs to be on-top of his game throughout the fortnight.

To this point, we know that when you do face Rafa on clay, your form and tactics better be spot-on, especially if he’s on. The drop-shot and overhead are actually pretty relevant shots, the former a critical tactic to keep Rafa off-balance and honest as he’ll drift so deep in the court; and the latter a must-have, a part of the arsenal that has to have polish and poise.

We can’t leave without talking about the format, the best-of-five. These two champions thrive in this format, so we’ll call this a wash. Rafa’s fitness, you can bet, will be tops (and that ability to get through the draw comes back into to play here). Novak is an equally difficult opponent in this format, and he should have more than enough to play well enough to get to the final and have enough to go the distance. Rome gives me a little pause, here, to be honest.

It’s silly not to think that Rome puts Rafa in a pretty favorable spot on this eve of Roland Garros.

On a complete side note, though this may be relevant to speak to the rest of the field not as excited about clay as about a handful or two of players that should be very focused and hopefully ready to give us some memorable tennis once the balls get tossed in Paris: here’s Kyrgios clarifying even more his place in the sport. I can certainly invest a small smirk at his criticism of clay, but he loses his off-court credibility by losing his on-court composure and credibility.

What a mess. The guy can be such a case for brilliance and a blight.

We’ll have a bit more to say as we get closer to the actual RG tennis.

Look here for some always interesting Hawkeye insights on the sport, folks. 😉