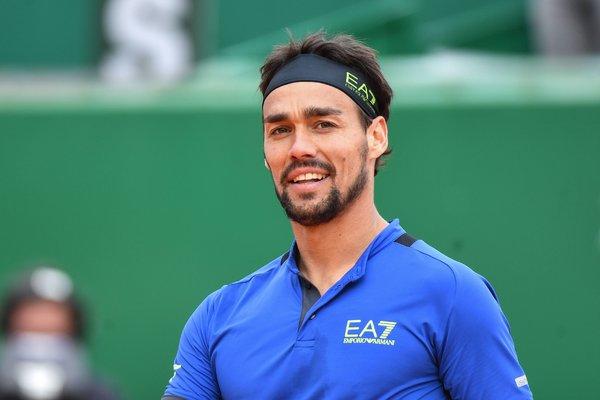 Once upon a time:

Guido had serve at 4-1 and two game points to go up 5-1 in that first set against Nadal in their Monte Carlo QF match. He had broken Rafa’s first three service games. 5-1? Would have been Rafa having to comeback and as we joked the other day about the Spaniard conceding five games to Grigor on this red dirt, perhaps Rafa isn’t quite so sharp this time around — the sun: he turns 33 in about a month.

But Rafa held those game points against Guido, broke to make it 2-4 instead . . . and the rest is history.

“Guido! Get me another cannoli!”

I am not kidding. I watched the Fognini vs Nadal match eating the cannoli I split with my wife (a whole one is too much — I need to watch the figure, avoid becoming another Guido).

All of this to say, “Wow.”  Interesting watch, watching Nadal die on a clay court, one he has owned for over a decade. Would he go-out on a bagel? Fabio had a couple of MPs there to make it so, but the volatile Italian couldn’t make it happen.

Quiz: who is the last player to bagel Rafa on the dirt? Federer in the 2007 Hamburg final, coming back from 26 to take that rare clay title against Rafa 62 60. El toro doesn’t get played like that.

Yet Fognini played Nadal today in this Monte Carlo SF pretty much to such a tune, an array of beautiful shots full of artistry, courage and vengeance (more on that in a minute).

Fognini is a lovely contrast of spicey volatility and graceful virtuosity on the court. When you think of the 31 year-old Italian, you think of nasty arguments with the chair and/or his opponent. But his tennis can be as chill as a few relaxing Italian melodies.

The background to this match is, of course, the little rivalry between these two players. You might not call this a rivalry: Nadal with the typical Nadal H2H numbers has dominated the exchange (11-4). But there have been words between these two, Fognini calling Nadal out for his bizarre antics (gamesmanship), playing Rafa as well as anyone, coming back from down two sets to none at the 2015 US Open, beating Rafa in five. . .

This isn’t necessarily a one-way street in this head-to-head.

I remember last year in Rome (2018), Fognini was playing very well, had all sorts of confidence and form moving through that draw.

Fognini had spanked Monfils and laid to rest Thiem in his march toward a QF match with Rafa. You’ll have to go back and fact-check me on this, but from what I recall, Nadal insisted that this QF match be played earlier in the day, earlier in the program, which only benefited the Spaniard, trying of course to avoid the Italian faithful who might have lifted their countryman past Rafa. Rafa was able to subdue Fabio in three.

In fact, I located my post on this turn-of-events. Indeed, Rafa plays poker, while most players want to just hit the ball with their aunt Molly.

I break-down, again, the competitive advantage that Rafa always seeks and (most often) finds against his bewildered opponent.

He also requested, allegedly, the first match on tomorrow’s slate. Of course. Can you imagine playing Fognini in Rome in the night match with all of that Italian hooliganism spitting on Nadal’s red clay? Nadal does what he pleases. Playing Fognini after breakfast is a complete advantage Nadal — AS IF HE NEEDS ONE. But that’s what no one gets. He cares. He wants to destroy you.

Fognini is not one of bewilderment. He showed that again today.

Interesting melodrama in Monte Carlo. There is a Serb in the final, not named Djokovic. And Fognini finally found the will to upset Rafa.

I did, mind you, scratch writing a post yesterday that wondered where the Djoker fanboy argument goes when Novak might actually be tanking a match to avoid Rafa. That’s the logic of those small-minded simpletons. Well, had Novak beaten Medvedev, he would have had only his bag-boy Lajovic to beat for a shot at another Masters and a ton of confidence for future 2019 clay court endeavors. The fangirl screams “he ducked Nadal!”

I say otherwise, but it’s still fun to write about stuff like that. 😀

Would it surprise you to see Lajovic win tomorrow? It should not.

But for the sake of the story-line and the veteran brilliance of Fognini, he deserves this title. He took-out Rafa. He’s an artist out there who’s earned this shot at this prestigious event. He deserves his name carved into that Monto Carlo pantheon, to consolidate his SF win over the clay GOAT.