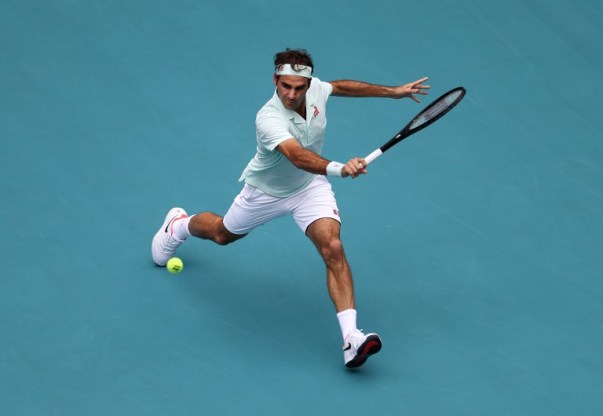 How do you all like that HRFRT concept at this point? I’ve said this many times: my HRFRT treatise in its current form is a very rough draft, which gets more and more inadequate as these twilight events twinkle in the waning hours of Federer’s career.

He may play another two years, who knows. But I conceptualized and began writing that in 2016. Think about that. I had the wherewithal, undoubtedly, to make that argument as sound and convincing as you can imagine back then, when things looked pretty shaky for the Swiss champ. Now I have the notorious (glorious . . . however you want to see it) 2017-to-present to add to the sound and fury of that thesis.

I am going to burn this place to the ground. I hope you’re around to read it and watch as everyone dies. Ha ha aha. Okay. A bit much.

Miami happened. I’m actually surprised and I’m not surprised. Losing to Thiem in Indian Wells seemed like it might have the same effect as his loss to Del Potro at 2018 Indian Wells. As he explains in the video below, this is not the case. Having the match, the championship, on his racket does make a difference. He had Juan Martin by the throat. Not so with Domi Thiem.

As I said in my 2019 IW wrap, he really didn’t have much of a choice against Thiem. Essentially, Domi took the racket out of his hand; this was my review of the event and Federer actually says this is what happened in the press conference video I’ve attached. This, after seeing such a different court this week, seems even more the case. Roger, even at 60 years of age, still wants a faster, lower bouncing surface. Indian Wells’ court had more grain, grip and higher bounce. And he played an especially solid clay courter who has found some brilliant hard court confidence. Miami’s smoother surface met-up with Federer’s smoother tennis ramp full of a kind of variety that many players have trouble with.

If he can stay healthy (and serve like he did in Miami) there’s no reason to think he can’t continue to be a nightmare for much of the field, no matter the surface.

Isner didn’t have a chance. We knew this going in and the match completely and utterly confirmed this premonition.

Federer wins his 4th Miami Open. His serve was fantastic and ROS equally (and predictably) as solid, even against Big John.

Interesting press conference here, as I said. Federer touches on the Tsitsipas comment about players like Roger getting preferential treatment, the more recent longevity of players’ careers, among other questions answered.

Good stuff — have a listen.

Again, Federer is 37, turning 38 in September. What about his younger pals of the Big 3: Rafa, who turns 33 in June; and Novak who turns 32 in May. As I said during both IW and Miami, Novak just didn’t seem to be really dialed-in. Novak wears his emotions pretty transparently.

I moved to say he is only concerned now with hunting-down Rafa on the clay and securing a second French Open title. I wouldn’t put that past him, either. Rafa, of course, will be a very determined foe for the Serb. Rafa has 12 billion points to defend on the European clay and knows damn well that his major-winning days are getting pretty short.

More than age here, we’re talking about injury. This has been Rafa’s muse his entire career, but the scar tissue has to be piling-up on this guy. He ends and begins every season (which happens to be hard court) injured. And his spanking in the AO final doesn’t add much light to the darkening tunnel. Novak, the youngest of the ATP triumvirate, isn’t going anywhere, presumably. That beat-down on Rafa in Melbourne works conversely for the Serb.

We will settle this discussion on the clay in a matter of weeks and months, but those two, almost on a different planet from Federer, are set, most likely to beat each other’s brains out (unless the Serb simply has his number) over the next several months and years.

Will these two be playing top-notch, big title winning tennis when they’re 36 or 37? Tough to imagine.

That’s another take-away from this year’s sunshine double. Rafa, Novak (and Roger obviously) will be facing a hungrier and more dangerous field, rife with young talent, than we’ve seen in several years. The danger of a Dimitrov has been eclipsed by a Khachanov or Tsitsipas (along with Grigor’s own inescapable softness). We are looking at a definitive change in the field. The lost generation is truly lost now, gone. Guys like Raonic and Nishikori may make a few runs here and there, but I’m ready to call it a day on their relevancy in higher stake tennis. The future has arrived.

I said this in a recent post, so I’m simply reiterating:

Ladies and gentlemen: the future is bright for the ATP. Guys like Thiem, Zverev, Tsitsipas, FAA, Shapo, Coric, Tiafoe, Khachanov, Medvedev, Opelka, Kyrgios, Hurkacz. . . will give us all kinds of joy and sorrow. Trust me.

What complicates this position is the quality of longevity in the sport. Will a 33 year-old Nishikori rise-up in a few years?

Despite my concession to this possibility, as this is clearly a trend, I double-down on NO; quality, in a slightly different way from how I used it in that previous sentence, has something to do with longevity. The guys staying long are good, or have a skill that might sustain the intermittent (or steady) beat-downs they receive. Karlovic has the serve, etc.

But the point is Nadal and Djokovic will see a stronger, younger field coming for them. Age, injury, burn-out and the likes of a 6’5″ Russian coming for the Kingdom could be complicating matters for Djokodal.

Federer will likely have snuck-out the side door by then, having had a few more opportunities to provide a few more free clinics, some lessons in classical tennis that may have more longevity than anything else.

Irony, no? We’re seeing the one-hander actually make a little statement on these spring hard courts.

A one-hander won Indian Wells and different one won Miami. 😀

In closing, seeing Federer continue to win like this (Dubai ((with a solid field)) and Miami, finalist in IW in-between), I get the sense that there’s another factor that will almost certainly become a big part of my HRFRT masterpiece: Federer loves tennis more than anyone else. Add that to what you have to face when you’re on the other side of the net from the Maestro. This rapture echoes in his style, his longevity and his championship quality. That comes through his words, as well; the video above, for instance.

Part of his genius now, if you believe him, his how he and Mirka and the rest of the team manage the family, the kids, especially. Yet they somehow get it done. How? Sure, the means to do this is a factor; the guy is loaded. But he obviously loves it, despite even some heart-breaking losses. He is giddy for the green fuzzy balls and getting to play with his black racket.

Indeed, looking forward to seeing Federer, in all of this pressure-less giddiness, back on the clay, almost as much as watching his younger tennis brothers beat the crap out of each other.