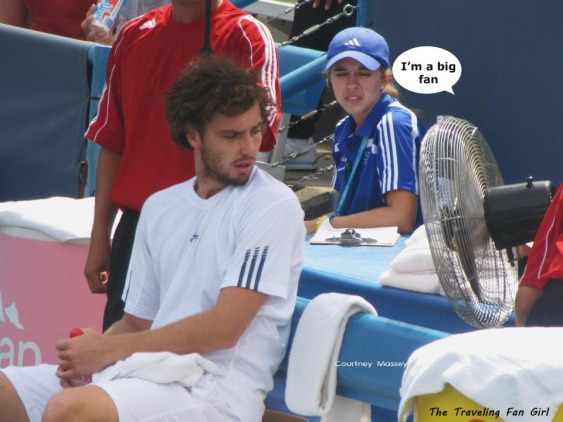 Two of the biggest FedFans I know of are the S. African clown, a former FedFan, now a Djokergirl; and that other guy that runs the Perfect Federer site. What the hell is wrong with these tools. This sort of gossipy cheerleader garbage is such a sad state of affairs. This is the blind fervor/rage of politics where people sell their souls, their humanity, for the chance to be popular, correct, I guess, by rooting for a really good player, putting all of their ovaries in the same basket and reminding everyone constantly how their quasi (or not) erotic attraction for this celebrity might equate to some kind of insightful analysis, when, again, it’s just them trying to build their relevancy among other similar fanatical bozos. Don’t let the fact that these and others like them are just giant front-running douche bags.

There are, no doubt, many other fanatic fangirls and boys, but in the blogosphere or social media universe in general, most know of these fanboy volcanoes.

Theirs is “intellectual flabbiness,” as my favorite feminist would say, but it’s even worse. This affects the whole professional men’s tennis conversation. The women’s too, but that’s for someone with a stronger stomach than I have.

On what is actually going-on with Federer, clearly he continues to struggle. If someone is near his camp, ping Ljubičić‘s ear about the BH. Good heavens. All one needs to do is watch the first couple of games of today’s match to see the plot of this story.

Federer is now running around every BH he possibly can. There are so many things wrong with that strategy that it’s best just to say all is not right on the FedExpress.

He had as many aces as DF (4). That’s just the beginning of this story, yet the story really started toward the end of 2017 where you saw the “inexplicable” start to re-surface. Losing in London last year the way he did (like I say about Novak’s end to 2016), might haunt him for years.

Of course, Federer only lost his first match of a round-robin; he could still win the tournament. 😀

But he’s 37. And he’s not your usual 37 year-old tennis pro. How much more tennis has he played than Karlovic, for instance? I’m not going to give you any figures, but let’s just say that this older tennis player has played a lot of tennis.

Actually, he’s not only played more years in each major than Ivo (just looking at those tournaments — think of how many more 250s, 500s and 1000s he’s played), but Ivo typically went out in very early rounds. Fed’s 37 is an old 37.

Federer is old and has looked old. I was pretty surprised to see him pirouetting around his BH like he did today. And Kei just kept pounding that corner. We know that if you get Federer on the run, he’s going to struggle, or least he has this year. This is no 2017 or 2009.

But as the story from Mcshow Blog went in 2016 when I battled the idiot fanbases, mostly Djoker off-spring, Federer is not playing at his peak. That is simply preposterous. Laughable. The Djokers need Federer “peaking” now just like they needed him to peak in 2016.

If you need that explained, just holler back. 😉

Federer very likely won’t make the SF in London this year. Tuesday’s match with Thiem should be quite good, both men playing for their WTF lives.

But again, no peak Federer here folks. Here’s a couple of tweets where I engaged one of these derelicts, the former Fedfan/nowDjokerSweetheart. His viciousness against Federer can be turned on its head to see and hear the love he still has for Federer.

So he peaked in a weak era iow.

No way he would have won the same number of slams if Djokovic and Nadal were around then.

He has losing records vs both and can hardly beat Djokovic since 2011.

Even in his peak in 2007 he lost to teenage Djokovic in Montreal. https://t.co/Pox2feUllQ

Many more years of top-level tennis left in him.

This refers to another factor in the TNLWS (Tennis is No Longer Worth a Shit) argument. In the typical thought experiment involving how someone from another planet might come to understand this professional sport of ours, at a blink: this alien intelligence would be equally bemused, horrified and tickled by the insidious non-sequitur enriched exegesis of fangirls and fanboys.

This is just more evidence of how stupid we are.