A great few days of tennis, which brings me to this question: how can I argue that once again, men’s tennis isn’t worth a shit when we get this kind of higher-end competition on tour?

Well, we’re still looking for a heartbeat outside the Top 3 (or even the Top 1 at this point) and my last post, referencing the mayhem of the Paris Masters’ draw, had a lot to do with Nadal’s continuous mysterious form.

The long and short of that is that his bulky excuse for style renders him injured more often than not (especially off the clay). He fucks-up the initial draw when he commits to playing and then predictably pulls-out. He takes the place of another player and he probably prevented what would have been a Federer v Djokovic final as I suspect a draw minus Nadal from the beginning would’ve had these two in different halves.

Nadalism will be my most complicated novella to write because he’s such a basket-case, as are his fans.

Speaking of fans, watching today’s second SF (I missed the Khachanov win), I tooled around Twitter throughout the match and saw all manners of fanaticism at its best or worst.

This is just too typical of the fanboy routine.

In the second guy’s case, he’s guilty of other off-target remarks, but I didn’t really want to track those down.

Federer is the favorite.

He is overdue for a win over Djokovic and playing at peak level.

I hate this match. For the second time.

Not just on points. He’s at the height of his time, though a little past that peak most likely (which again makes the end of 2016-2017 such a costly slip for the Serb).

But no way Federer should beat this Novak. As I argued in my comments with my Polish pal Wlady, Federer is about the only guy who can beat Novak right now, but it takes an absolute brilliant run from the Maestro and bit of a drop from Novak — we almost saw that today, but watching Federer lose his grip in the first TB and in the second TB was pretty much par for the course. Let’s not forget that Federer did play really well (granted, Novak seemed less than top form because of flu or whatever), staving-off around 12 BPs, so this was just a good competitive match, in the end.

Nolefam, like the cartoon character above (Novakfan 2) complain because this was too close for their comfort.

Fedfan will argue their guy is too passive and too old.

Both fanMobs, in their defense, are right. Novak should beat Federer more handily and Federer is a bit too passive, too old.

Would you say that Novak is in the same era as Lleyton Hewitt, Marat Safin or Andy Roddick? Federer is the same age as Hewitt, a year younger than Safin, and a year older than Roddick.

People don’t get that Federer’s tennis at this point is really beyond the pale.

Which brings us back to my unyielding insight and thesis: men’s tennis is no longer worth a shit.

Federer will compete grandly in London in about week. He should face Novak in the decider of that competition. Could he win London? Sure. Will he? Probably not. Novak simply has too much poise and a style that makes the offensive giants struggle to maintain that upper-hand. A Thiem, Tsitsipas or Federer is the type to really challenge Novak, but too many unanswerable questions arise from Novak’s side of the net.

Finally I heard someone repeat what I Tweeted-out before the U.S. Open final.

#Novak serve huge factor today. If he can routinely hold, his ROS is that much more ruinous. @usopen

Justin Gimelstob of Tennis Channel said today, to his credit, prior to the match that if Novak continues to show this kind of rhythm on serve, he’s almost unbeatable. He followed that up with a nod to the Djoker’s notorious ROS. Novak’s serve since his ROF (return of form) has been unreal. Go watch that WB SF v Nadal with this in-mind. If he can continue to serve like that, really really tough to stay with the Serb.

But again, great match. Great to see Federer still competing at this level.

What I wanted to write about a few days ago was the Thiem v Coric match. This was a grand showdown of style and character. The best man won. 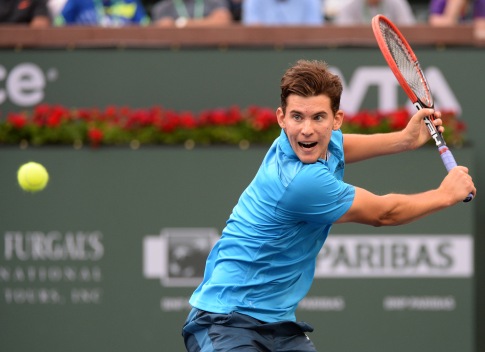 Coric is playing some of the most impressive tennis this season. His wins over Federer alone are impressive, one of which was in a final on grass. He has the make-up of a guy who will compete at an even higher level very soon, winning some bigger and bigger tournaments.

Thiem acknowledged this in his post match interview, pointing-out how strong Borna’s game is, the way a match like this can go either way.

Borna might not have this kind of modesty, though I may be wrong on this. His seems a much tougher, less congenial approach to the match and toward his opponent.

Here we see the style of tennis and the “content of character” fill the same pint glass. I prefer, of course, the Thiem brew to the one Coric is serving.

Thiem coming from a set down and then 1-3 in the third to beat the Croat was a very important win for the Austrian. Very happy to see this from the one-hander facing-off against this next great two-hander.

This hopefully becomes a nice rivalry to help define an era that seems will never quite materialize.

To the point, however, the two-hander is an inferior style of tennis. This comes down to a philosophical contention. Is tennis a game of style? Does style matter in the appreciation of the sport? I don’t think this is even a question, though some knuckleheads will likely make fools of themselves in this particular exchange.

I would argue that Novak makes the shot palatable. Why? Because of style. Novak’s style is a distinctive genius, another timeless form that practically transcends the game. Like Roger’s, Pete’s, et al. 😉

For the most part, the two-hander is becoming a mark on the sport. Sorry if that bothers you. Some truths can be hard to accept, but I’m confident you can learn to live with this reality. 🙂

This debate reared its beauty-and-the-beast head during this Thiem v Coric Paris Masters R16 match. Coric is a mockery of tennis style. Is he athletic and delirious with diabolical competitive spirit? Absolutely. But to the tennis style council, his overall tennis tread is stiff, uncouth and lacks the class of a more sophisticated game like that of Dominic Thiem.

This argument will likely turn to wins and losses and the two-hander has the advantage, these goofy-swing advocates will argue, of consistency and safety and other counter-intuitive characteristics.

The Thiem v Coric match was the lastest test of my hypothesis and we were pleased with the result.

If you have and/or appreciate the one-hander, stand tall and proud. The battle will continue and the war (definitively being won, btw) will continue to be transcribed by yours truly.