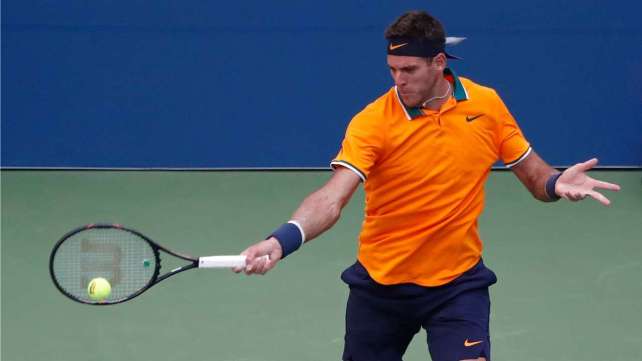 I’ll make this quick since it’s all about the matches at this point. A little perspective can help, but we just want to see two gents go to war (in both matches!). That Thiem v Nadal QF still resonates in our tennis imagination. That was a milestone for the career of Thiem and perhaps the development of the sport — more on that later.

I don’t see Del Potro beating Nadal today. Nadal has had plenty of rest since his QF five-setter. And he doesn’t really let such human fragility get in his way, usually. If he does lose energy in a fourth or fifth set today, we’d understand, but I don’t think he’s affected like that, not with so much on-the-line (big picture especially).

Del Potro doesn’t move well enough for my tastes in match like this. Sure the courts are slower, but Juan Martin will still have to hit that BH a lot. He can come-over every once in a while, but 78.9% of those will be slice. Again, he’ll try to run-around the vulnerable BH, but that just opens-up the court for the vaunted Nadal inside-out FH or CC BH.

Then again, if the Argentine is serving huge and simply makes some early moves to get up a set or two, he’s probably through. And no one, other than a lunatic Argentinian, wants to the tower of Tandil to advance more than I do. We have talked about his impact on the sport, what could have been, etc.

Of course most of us remember well the 2009 SF between these two, where Del Potro treated the Spaniard to an embarrassing 2 2 and 2 spanking. Interesting that Nadal came back the following year and won the Open. That’s Nadal in a nutshell. He’s vulnerable, can be out-classed, etc., but he’s a problem-solver and as hungry an athlete as we’ve seen this side of Jordan.

Del Potro will have to play unbelievably to stop that freight-train today. One of the more difficult tasks in tennis. The two met this year in FO SF and WB QF. Nadal owns the 2018 major H2H, so we’ll see if Del Potro finally has him where he wants him, or if this remains the same sort of outcome.

Nadal in four although Del Potro in four would be even better.

Did I just jinx Novak? If I did, he’s in a lot of trouble.

He has to win this tournament. I’m more the tennis historian than I am the fanboy. Sorry, reader (I know I’d be a lot more popular, have hundreds more followers, etc., if I was a bleeding-heart fanboy).

In the grand scheme of the sport’s history and, more particularly, this golden era: Novak needs to claim his 3rd USO title and his 14th major this weekend. Furthermore, with the likely finals opponent from the top being none other than Rafael Nadal, Novak needs to take care of that USO H2H. Two of Rafa’s three USO crowns have come by beating Novak in the final (2010 and 2013). The Serb triumphed over Nadal in the 2011 final, but here we are again and Novak needs to secure this hardware, here and now.

Which brings us back to Novak v Kei. Nishikori has played well this year. A finals appearance in Monte Carlo, R16 at Roland Garros, QF at Wimbledon. He went-out early in Toronto and Cincinnati, but we know this guy has some game when he’s healthy.

Yes we can glance back to that 2014 U.S. Open SF where Kei took the Serb down in four sets. Otherwise, however, it’s 14-2 overall between these two and Novak, we know and have made this pretty much the theme of all 2018 USO prognostication, is the prohibitive favorite at this major, from the beginning and still.

Lastly, the weather has turned cooler in NYC, much cooler. We should get a roof closure on Sunday for the final as rain is in the forecast, temperatures in the low 70s and upper 60s.

Novak, too, has looked as clinical as ever. Going back to Cincy and throughout this draw he’s had some tough little spells here and there, but there’s the other more common sight of him out-hitting every opponent, from both sides, retrieving and serving quite well and what’s most concerning for the remaining three opponents is Novak’s ROS. He can seemingly break you at any time, especially when the moment seems even more consequential.

As tough as Nadal is to beat in a Bo5, Djokovic, when he’s in form, is probably tougher.

Good luck to all four.