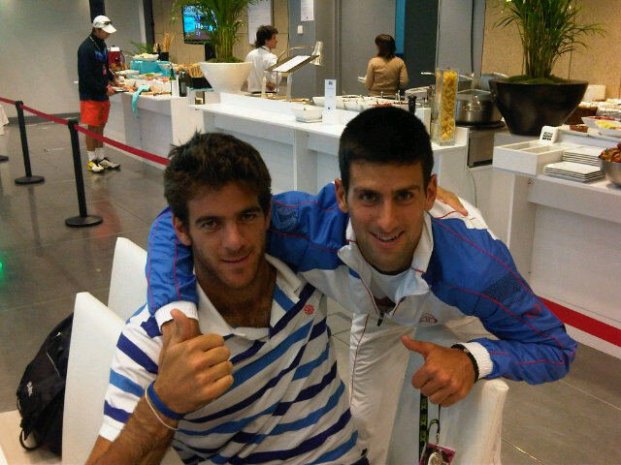 I really only saw some of the Djokovic v Nishikori match and this I could have done without, other than we have definitive confirmation that Djokovic is playing flawless tennis. Some of this may be his opponents, but when we factor-in Wimbledon (I start back to that Rome SF where a one-legged Novak scared the crap out of Nadal) and Cincy and his overall composure and closer mentality — just a scary combination from one of the all-time greats.

But he gets a Juan Martin del Potro who appears to be ascendant, flying, rolling and destroying his draw. Nadal was probably a bit short on fuel, but losing that tie-break was probably as good as the guillotine (I followed the match and could sense the bit of drama there at the end of the first through my phone’s digital display — breaking at 4-5 certainly had my prediction looking pretty good for a few minutes at least).

I wrote in my preview that del Potro could come strong and that if he got an early advantage, the wisdom of Nadal might realize this is not going to work, that trying to squeak-out another long 4-5 setter would be setting the table for a pretty rested Novak (that is if Novak did, in fact, routine Nishikori — he did).

Sure some can say Nadal went to the injury card, which is weak. But it doesn’t matter at this point.

We have a lot to say about several things after the tournament — where this leaves Rafa, Roger, Domi, etc.

Rafa again could not defend a non-clay title. He probably should have lost that QF (I certainly felt that way) on Tuesday. Nadal found some tougher competition in his draw and these are the breaks (he certainly makes many matches classics and epics — that’s his style, a bit of a dump out there if you know what I mean. Certainly a fighter.).

The Argentine is indeed feeling his chances to make this count. 2018 has been good to the big man, scoring his first Masters title at IW, making some nice runs in Paris and London.

We have never seen a Novak v Juan Martin major final. The Serb leads 14-4 overall, but the Argentine has a head of steam right now and one of his recent matches with Novak, back in the summer of 2016, was an Olympic Games win for the Tower of Tandil, where he had there too a head of steam. Those kinds of matches, like big Davis Cup ties, like majors, bring-out the best in guys like this.

What I’m saying is we should get quite a match tomorrow. Quite a major final. 😀

Novak looks awfully good right now, but the power players have at times posed some problems for the Serb. He tends to do quite well (against everyone) against those that might prefer to stay at the BL, try to exchange from that position, might not have quite as much on the serve, etc.

Novak looked human against Milos and Marin in Cincy. Kyrgios has a 2-0 advantage against the Serb.

Look: Novak appears virtually unbeatable at this point, but the big (needs to be big and effective) serve and first-strike tennis of Juan Martin could very well prove to be a menace for Djokovic.

Then there’s the intangibles. Juan Martin has to feel pretty fortunate and a bit urgent to be back in a final after near-career ending surgery (multiple times). You think he has a little added sense of purpose on Sunday? Would make a fine year for the scrapbook, for the trophy case back at home (2018 IW and U.S. Open?).

He probably had the same odds in 2009 against Federer. And came into the final after smashing Nadal. And rose to the occasion in spectacular fashion — I have a whole post for that match as one of the most significant matches of the era — seems to have clarified some career trajectories, narratives, etc. More on that later.

The point is Juan Martin can find the form in a major final, in NYC, against a heavily favored Big 3 tour boss.

Conversely, Novak has struggled at the U.S. Open. Isn’t this is eighth final in Flushing Meadows? Wow. That’s pretty dominant. But he only has two titles. We love Stanimal, but Novak has lost two finals to him (one here), and two to Andy Murray (one here) among others. He’s come-up short here (and elsewhere) in the past.

If we’re betting, we like Novak on Sunday. He looks too composed, too good. Moreover, something we are sure to say several times when such insight matters, he can go deep and dark if the circumstances warrant such depth and destruction. Like with Nadal today, del Potro probably needs to get an early advantage and evidence all kinds of service holds, FH winners and BH buoyancy (don’t let that sink his chances).

Speaking of FH winners, I am looking forward to seeing if del Potro can hit some of those through the court against the Djoker on Sunday. The sloth-like conditions of Arthur Ashe are well documented at this point, but the Serb is digging and retrieving EVERYTHING. A Nadal and Djokovic highlight reel of defensive digs would be sorta mesmerizing, sorta not, I guess. I digress.

The Argentine needs to break the Serb’s defensive backbone (at least dent it). Unreal stuff Novak is able to do back there, of course turning such rallies around, as well, giving him the chance to show-off his offense. When is he defense, when is he offense? That’s part of the genius of Novak, the balance of his game. Tough to find any weaknesses.

In the end, we want brilliance and blood, no?

Here’s to a monster and memorable final between these two gentlemen.

Talk to you (a lot) on the other side.