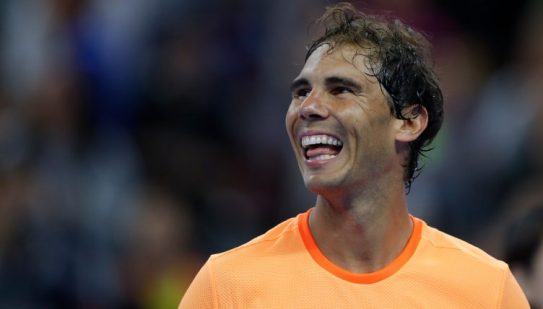 What do these professional tennis players have in common?

You know the answer and if you don’t know you better act like you do. Your sport is on life support.

A study from 2011 surfaced that uncovered pretty corrupt U.S. Open draws through the years, highlighting how top seeds at this major were systematically given favorable draws. As if this is just a U.S. Open phenomenon. But we see that here in embarrassing fashion with the one-and-only.

Luckily, what I’ve found is that tennis (life too) makes corrections and tends to safeguard against total injustice — other than our treatment of the poor and our species’ concentrated war on the sacred natural environment, both of which continue to endure a disgusting and evil prolonged human-born annihilation.

Other than those examples, sport and life often provide a bit of balance. Sometimes.

There is zero balance in this here major draw. Two years in a row?

Once he’s been escorted handsomely to his QF, the best case scenario is Thiem, Shapovalov, or Anderson. Thiem’s win today gives me hope of a sneaky little surge out of nowhere. But the 1R is the 1R. I also didn’t see the little ceremony between Ferrer and his master, but I suspect it was an emotional and gripping set and a half.

GTFOH with this bullshit bandwagon of postured intimidation. GTFOH.

And listening to B Gilbert wet his pants at the slower, higher bounce of these hard courts is another boil on the USO ass. Must make men like Lendl, Wilander, Johnny Mac, Pete and Andre shake their heads.

We’re keeping hope alive over here, but the sights and sounds are pretty grim.