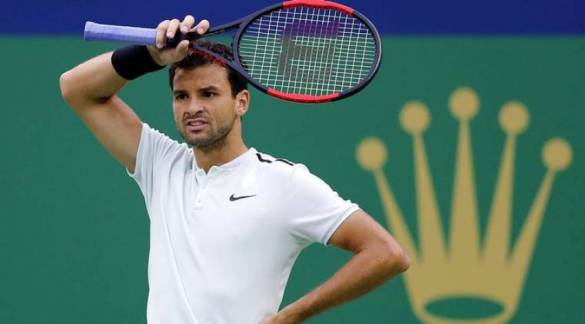 We’ll see how much tennis they can get in this evening.

Play has been suspended as the rain has returned with a fury.

I’ve been watching Djokovic v Dimitrov. Dimitrov looked solid in the first set, Djokovic not so much (like his first set v Mannarino), Grigor prevailing pretty easily 6-2. In the second set, the Bulgarian got another early break; things looking-up for the defending champ. Djokovic turned-up the heat/tightened the screws, so we’ve been watching Grigor come-apart, which is too familiar.

Danny needs to tell him: when Novak starts to surge like this, keep the point alive, take just a little off the ball, be patient. Nope. The errors came down upon the Bulgarian’s game like the rain. This is all mental, obviously. Novak presses, but it’s still not the most offensive brand of tennis. Try to stay with him. The OHBH goes south in this kind of tennis. He’s pressing, stressing. Calm down and toughen-up!

Novak rolled him in the second, coming from a break down and taking the second set 6-3. Perhaps the rain helps Dimitrov regroup here. He has the game, especially for the quicker surface. But he’s just so fragile. Djokovic, on the other hand, was laughing even being down a set and a break. Unless Grigor can regroup and get his serve and full-court tennis together (play smart), Djokovic finishes this quickly.

Khachanov came back and evened his match with Cilic at a set a piece. The rest of the matches are untouched, Stan up a game in his, but still a lot of tennis to be played.

The big Canadian overpowered his younger countryman like we suspected.

Lastly, though we probably don’t see it tonight, all eyes on the Del Potro v Kyrgios match; the Argentine (players of that upper echelon) tend to provide a better audience for Nick’s bullshit antics. The tennis might be epic, as well.