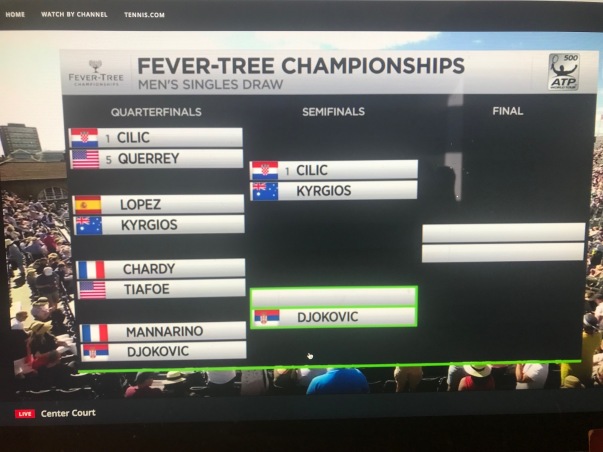 Matt: Watching tennis on the tele, writing to a few of my friends regarding said tennis — between jogs around the hills and cold beers.  You?

Friends, nothing and I mean nothing beats a little Friday morning grass courts from London and Halle on June 22, 2018. My goodness the coffee is strong and those raspberries are bright!

Folks, I am smelling the grass. Catch my drift, everyone, get yourself some of this tennis underway and tune-in to Mcshow Blog for heightened coverage and commentary. Lots of tennis and I still need to sit-down (I am now) to chart-out my little Tennis Channel plug and meditation (tune-in for this one) on that much applauded 2008 Wimbledon final. One has to complicate matters given all of this false sense of certainty or naiveté and rosy nostalgia. One must add to the context and insight. 😀

Watching Tiafoe and Chardy now, the Frenchman just secured the first set 6-4. I would have liked the American to advance for nice little SF with Djokovic tomorrow. But he needs to win this match first, obviously. A little more poker face, Frances!

Djokovic is looking steadier and more difficult by the week, but he still has his fainting spells we’ll call them. He will certainly (unless Kyrgios and Cilic kill each other) have to play some even higher-level tennis to claim this trophy. I think he has it in him, but that’s the question. If he survives the SF and beats an in-form Nick or Marin, he is rolling. Looking forward to watching these outcomes.

On that note, Cilic v Kyrgios SF just looks sinful. Make sure to lay your eyes on that for a little preview of some Wimbledon potential suitors. Could be some fireworks.

Federer again just through to the semi-final where he plays American Denis Kudla (really a Ukrainian by descent), a decent grass court player; he made WB 4R in 2015. He’s in a Halle SF against Federer, so not bad either way. Federer seems to be going through the motions here, again a bit anti-climactic after Stuttgart. Ebden knows the grass, like Kudla, so these are more the tough tests of craft and style.

In the other SF, Agut overcame the powerful (and underdeveloped) Russian Khachanov to await the winner of Coric and Seppi; the youngish Croat just won the first set there 7-5.

PS
The Kyrgios talent continues to bury any contrarians. Seriously, there are folks I heard call him a serve bot. He has so much talent it’s a little disconcerting. He had 32 more aces today (64 in last two Bo3 matches). Plus his creativity (genius) around the court, 132 mph second serves, ground strokes that defy reason: one has to take the bad with the good on this guy. Remarkable talent.