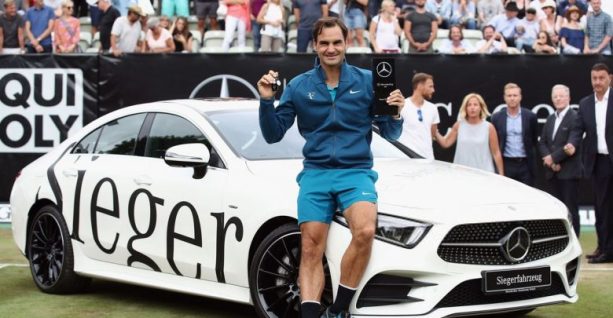 Nice little start to 2018 grass for Roger Federer. With that 2017 Mercedes Cup R1 loss to his buddy Haas last year probably lingering, expectations might have been somewhat subdued as he took the court this week, warming-up for his run at #10 in Halle and #9 at Wimbledon. Roger had a good week, for sure. His grass class is a particularly delightful show given its historical flow and the last couple of months of a much dirtier and grittier style of play.

How inspirational is Roger’s grass court tennis translations? His country’s 2018 World Cup side suddenly knows Portuguese, which shocked Brazil into a 1-1 draw.

What’s a bigger upset: Mexico over Germany 1-0, or the Switzerland v Brazil draw? Sorry, but it’s the latter. Germany looks either too old or too young (they looked uninspired, disorganized, and watching Gomez run around while Sané’s at home . . . granted the young City star has dropped his level more recently, but everything seems open to second-guessing with that kind of performance). At the same time, Mexico can attack and find the net with all of that passion and fútbol fluency. Mexico is soccer first. Granted, this is a massive result in this group of death, but Mexico can play soccer.

Brazil is favored to win the Cup and they must win the Cup; this is their destiny, especially after the 2014 humiliation. Beyond Coutinho’s brilliant curler, they weren’t all that beautiful. This tournament has gotten off to a banger!

As for the Stuttgart final, straights like we suspected, but certainly a bit of impressive tennis from the Canadian if you ask me. Roger securing the early first set first break of the week against Raonic was critical. Raonic picked-up his game from there and stayed with the Swiss now world #1 through out the match, but tough to catch-up to Federer at that point, at least in that set.

Federer’s ground strokes, aside from the rest of the game, are a load — like Nadal on clay, Federer just knows and feels so much more comfortable on grass than most of his opponents. On top of that, he’s fresh. Again, that offensive FH/BH combo is ruthless, not to mention the cut, the drop, and the volley (the running volley only adds to the threat and the half-volley pick-up is another aspect of the comfort and fluency that just adds to the Fed variety).

Be that as it may, in some of the longer rallies in either set, I watched Raonic out-hit Federer; this was winning grass tennis with some truly world-class finishes to go with some big returns, the serve, etc. Tough to do enough of that to grab the match by the throat, but with the massive serve looking on point and his ability to move well enough to trade with Federer, along with a for real S & V, you do not want the Canadian in your grass draw. Let me assure you. I think Federer has his number, especially in a Bo5, but he’s going to hit many an ATPer into submission. His game translates nicely to the surface.

Which is why this is an especially nice title for Federer: this is his first Stuttgart title; he had to beat Kyrgios and Raonic in this warm-up of warm-ups; and now he has to be pretty confident going into a more comfortable warm-up in Halle with an (on paper) easier draw. His Halle draw, in the end, could mean Thiem SF and Sascha F, but Kyrigos and Raonic are right there.

Sure, Federer could relent a bit with this very satisfying win today, but we have to think he keeps the Express rolling through Germany and onto the lawns of SW19.

Tomorrow: Preview London where the stacked field there will give us some insight early with Andy on a comeback having to open against Kyrgios and Djokovic potentially getting Dimitrov in the 2R. Lots to discuss.

This is a great bit on Kyrgios’ reaction to the SF loss to Federer. Again, great win from the Swiss as I had predicted possible upset/trouble for Federer. You do not want Nick or Milos at all in the next month.

Take my word for it.