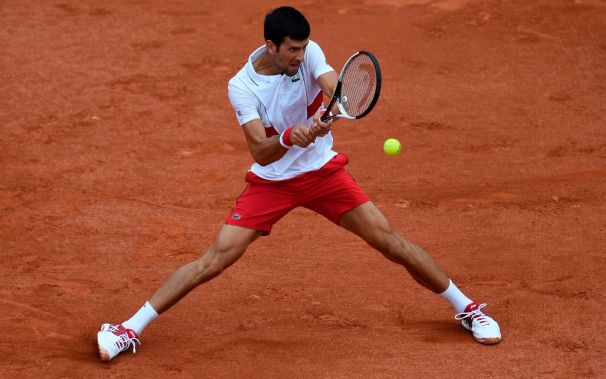 As I said in a recent comment to our friend RJ, most players rather than try to compete with Nadal would actually prefer (and probably even make the request) to do the Spaniard’s laundry. Really creepy stuff. What is Pella doing right now? I suspect he’s standing in line to get Rafa to autograph his sorry ass.  2 1 and 1?

So, Bolelli is just that much better than a guy like Pella? I am the first to discuss “match-ups” and yes they do matter, but Pella is even a lefty, so that shouldn’t necessarily make this a match-made-in-heaven for Nadal. No, this is just clay cowardice.

As I said in my Bolelli commentary, the guy played to win and yes his relationship with Fognini I think does matter here. Playing Rafa is 70% mental. Rafa’s tennis is 70% mental, so do the math. This is not as much about ground strokes as it is about playing that little game of FUCK YOU TOO.

Elsewhere, looks like my words of warning got Del Potro back on track. After losing that first set Mahut in R1, he smashed the Frenchman and looks to do the same today to another Frenchman. Bravo, Juan Martin. Keep it going.

Thiem’s match against Tsitsipas was must watch. That is the future of the ATP; the violence of a Dominic, Stefanos, Denis, or Kyle is music to my tennis eyes and ears. Nice win for the Austrian. Love that one-hander, which 3 of the 4 I just mentioned use with style and legitimate threat.

And did you heed my warning about Lajovic? I called that to a tee. Huge win for Sascha. Huge. Coming back from down 1-2, and winning going away. We should get that Sascha v Dominic war in the QF (I believe).

Djokovic looks good from my perspective. Sure we’re seeing some of that flailing and so forth, but he’s winning is straights and the tennis is still looking to progress to that dominant ground game that no one wants any part of. His heavy and more accurate FH and BH are coming. Like Nadal, his ability to break you at almost anytime makes him a massive threat.

And as long as he’s hitting that BH DTL like that, on the corner, nightmare. As long as he keeps winning, the tournament and its fans benefit. Idemo.

Schwartzman and Cilic continue to advance in solid fashion, Coric is through to the third, and we’ll see if Gasquet, a solid winner today against Jaziri, has any balls left to do anything to Nadal. Hopefully that even resembles tennis; Nadal’s R16 opponent looks like a tour of the Parisian red-light district: almost obscene. Gasquet, mentally, tends to go away. Will this story continue on his country’s clay in front of his home crowd?

I’ll have post up later today with more bang and analysis, a bit on the NBA finals which start tonight.