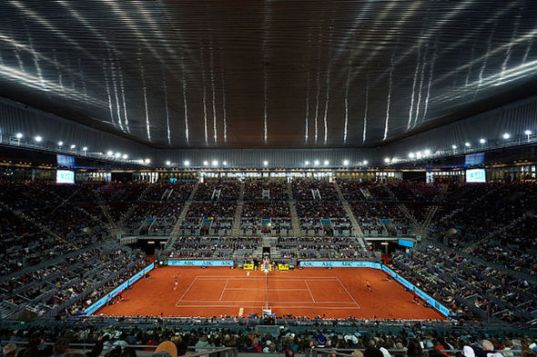 Stefanos v Sascha tomorrow could be quite an occasion, seemingly cousins though I am still a bit smitten with the 19 year-old’s ability to come to net.

That bottom bracket seems loaded (for tourney runners-up), but clay generally has that evened-playing-field feel. Fognini, Ramos-Vinolas and anyone else, practically, who gets the good wind (even Isner has shown clay capability) might challenge. Certainly, Sascha with his recent win in Munich has some pull; still, tomorrow’s match is hopefully quite the event.

In the 3rd quarter (moving backwards) early match here will be Chung v Goffin. I saw last week’s Chung run in Germany and thought, yes, we get to see the maturing S. Korean on clay, a retriever’s paradise. He has the makings of a nightmare on clay. Sascha took care of that threat in the SF, but Chung should do quite well on the clay.

But he gets Goffin in that 2nd rounder. Another early Madrid (perhaps) must watch.

So, we see Djokovic advancing today. Shame on anyone who says, Wow, poor Djokovic got a tough draw: Nishikori in the first round! What’s the problem with that statement? Poor Nishikori! If you have a whiff of upset there, that Nishikori should have advanced, rather than the Serb, that is a terrible misread. The Serb looks good with a straight-set victory.

However, we have reservations still, which we will continue to articulate so long as he isn’t strutting around the court like that rooster who ruled the ATP a couple of years ago.

He still shows the vulnerability in his footwork and overall body language. Then again, there are giant signs of his ROS coming back and his ability to out angle and hit his opponent. The movement and serve are not scaring many foes at this point, but he’s coming.

What’s happened to everyone’s favorite Frenchman, Pouille? I liked him in that 2016 USO match v Nadal (remember that call, dear readers?), but he’s been quite underwhelming despite a few 250 titles since. Did you see what Paire wrote on the camera lens post-match? That guy is a piece of work. Ha ha.

Novak has his hands full in that bracket: he gets winner of the youngers Medvedev v Edmund, and then, if he’s still alive, Goffin in R16. Maybe Dimitrov QF? Who knows.

Certainly a Novak v Sascha SF would make everyone happy, but there are so many/much traps, smoke and mirrors that we may as well just enjoy the grind.

Sorry to over-simplify the 2nd quarter, but if Juan Martin does not make the SF, we have a non-starter top half. It’s already a beached whale, but give us guts, give us glory!

Anything in that first SF other than Nadal v Del Potro is unfortunate. We’ve missed the tower of Tandil. Those two have really never played on clay (actually once, I believe, in 2007 Roland Garros). Give us the goods, the splendor in the Caja Magica.

Nadal, though Madrid doesn’t match some of this other clay mistresses, should find very little trouble securing sixth title there. He hopefully has a Thiem QF in preparation for a Del Potro SF.

Looking forward to watching some good tennis over the next couple of days.

Work is waning, so much more to say between matches, as well.