The loss of Raonic last night adds a little exclamation point to my post here about Dimitrov and the lost generation. The exceptionalism of those boys’ ineptitude is pretty staggering. And this after 2017 when probably the best known of the bunch Dimitrov won his first Masters (Cincy) and the WTF, not to mention making the 2017 AO SF. But the inability to find results on the tennis court has been this group’s biggest blemish and only continues to add to the criticism of their breed.

Clarifying a discussion of generations of tennis players is vague. We’re probably better-off keeping this generational landscape vague since to get more specific and “accurate”  seems to illustrate how difficult and even futile that is as a true analytical methodology.

This article takes a fairly simple approach, grouping players by their birth year and establishing that a generation is five years long. What does this approach reveal? Other than an awareness that this doesn’t really work, this five-year generation model clarifies  that Federer is really part of that generation including Lleyton Hewitt and Andy Roddick, that the Nadal/Djokovic/Murray/Wawrinka generation is the deepest and most competitive, and that the “lost generation” of those boys born between 1990 and 1994 remains incredibly doomed. This lost generation is an outlier, as the story goes. As we reach further into the future and begin to assess even younger (and more talented) tennis players, that unmistakable ZERO only grows in its significance and futility. 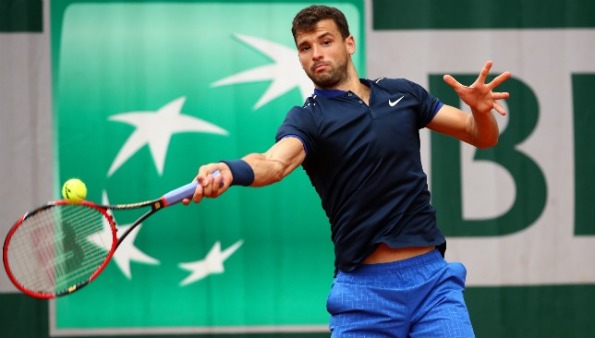 Dimitrov seems to be at the middle of this discussion hence the playful title of this post.

In my version of this lost generation, the culprits seem to be Dimitrov (26), Raonic (27) and Nishikori (28). Those players, for whatever reason, in my mind, seem to define this group’s futility; perhaps because they’ve had some success, have great name recognition, so they’re easiest to target. But if we just look at age, we have to include Goffin (27) and Carreno Busta (26) and then, I guess, a bunch of others that fall into this age range that include Dolgopolov, Paire, Johnson, P-H Herbert, Pella. . .?

Yeah, you can see these names don’t quite fit together.

What about Del Potro (29) and Cilic (29)? Interestingly enough, they seem to be a little older and each has a major.

That article’s methodology actually (successfully) clarifies this complication; DelPo and Marin escape the climate of that cursed time-zone.

The article goes younger on this generation, too, so Sock (25) and Thiem (24) are included in this futility farm. Personally, I see them in a different class or group, but based-on age, they are right there with Dimitrov and Co.

The premise of that article is can this lost generation turn the table, so to speak, reverse the trend? Can one or some of these boys win a bloody major or more Masters titles (Dimitrov and Sock added to the team’s booty in 2017 – the only two Masters claimed by the lost generation)?

Looking here at Miami, the lost generation is down to one candidate in Carreno Busta. The NextGen has two candidates still alive and this appears to be the trend along with the continued dominance of Fedal.

The lost generation, thus, is getting squeezed-out by the past and the future. They thought there was pressure before?

I suspect if you polled tennis “knowledgeables,” you’d get Dimitrov as the center-piece of this discussion and generation. Why? I suspect three reasons:

People still believe in Grigor. I wrote optimistically about his form and the possibilities back in early 2017 (referencing even late 2016), of a guy perhaps finally finding the path for which he’d been predestined.

We got into a little debate earlier this year, where a reader asked how I felt that Kyrgios is more talented than Grigor.

In other words, Grigor remains at the center of this “lost generation” conversation. Partly because people remain interested in his tennis.

But he’s again fallen into that abyss of unfulfilled promise. Or has he? By the end of 2017/start of 2018, he’d reached #3 in the world, which seems quite an upward trend. Finishing the year with a win at the WTF also counts towards this current time-frame being a very promising chapter in his tennis career. Maybe we’ve yet to see the end of this lost boy.

But 2018 seems not be a continuation of this 2017 promise. He’s at #4 in the world (with boys breathing down his neck) and early results include his loss to Kyrgios in the Brisbane final (where Grigor was defending), and his QF loss in Melbourne to the unproven Edmund (though he did avenge there his USO loss to Rublev and his Brisbane loss to Kyrgios).

He did make the Rotterdam final where he was dismissed by Federer 2 and 2, but has since lost R1 Dubai to Jaziri, R2 IW to Verdasco, and R3 Miami to Chardy.

Dimitrov, unfortunately, is in the middle of this epidemic of ATP generational incompetence. He’s certainly not alone, but he’s the proverbial president or prime minister of this forlorn country. Surrounding this group’s troubled past and future, again involves the invasion of NextGen and the last days of Golden Age.

And in this way, all things tennis, from the past through to our current and future deliberations, connect back to Grigor Dimitrov.

His connection to the past is probably his most recognizable quality at this point. This occurs because he’s both seen as the ill-fated star of that generation and as a descendant of Roger Federer (the prophetic collision of blessing and curse).

We turn then to this ancestral force that is the FedExpress, which happens to be back on the tracks, by-passing European clay and headed for European grass, traveling first-class, of course.

What about Fed’s French (mis) Connection?