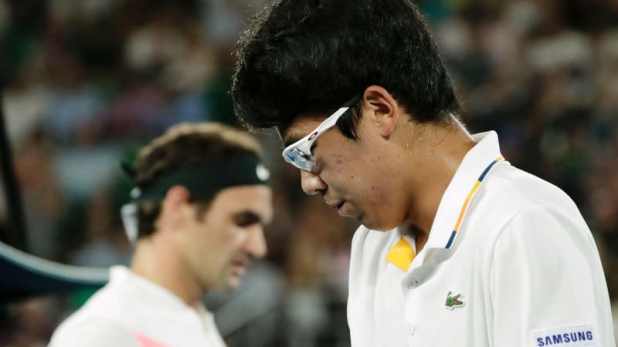 We’re one round from the SF, which I get a chance to watch this Saturday.

Seeing Federer play would certainly be a nice get; I have seen him play four matches in Indian Wells over the last few years: 2012 SF win over Nadal; 2012 Final win over Isner; 2015 SF win over Raonic; and 2017 SF win over Sock.

He should have a bit too much for Chung tomorrow and with the #1 ranking hanging in the balance (he secures #1 by reaching the SF), one would think he has plenty of motivation to take care of business.

I watched a bit of the Chung v Berdych match the other night. As solid a career as the Czech giant has had, he just looked really outmatched by the youngster, who continues to impress. Poor Tomáš.

My gut says this match tomorrow is not routine for Federer. His motivation to win might actually be surpassed by the S. Korean’s, who has to still feel dejected from 2018 AO blister-gate. Sure the stage and his opponent dwarfed the rising star, but retiring with exploded soles is no way to celebrate that epic run in Melbourne.

Tomorrow might not be Chung’s revenge, but I think he’ll be very prepared with otherworldly desire.

The question he has to answer concerns his service game and his ability to deal with the magician’s wand, which seems to be finding a bit of form.

Watching Federer this week win without his best stuff, on this hard court, reminds me of watching Nadal on clay. Sure they’re a shot or two away from hitting a demoralizing passing-shot that makes the crowd gasp and their opponent sag, but the basic rallies from these two have all kinds of macabre spin and sinister angle, which keep the opponent unsure and uncomfortable with minimal margins.

This same sort of genius can be seen in any great athlete. The great baseball pitcher comes to mind. These all-timers don’t just throw the ball; they pitch. And the best of these witches do things with the ball that baffle hitters. And they can secure a game, often, without their best stuff. Because they know how to “pitch.”

Federer should advance; his service game to the S. Korean’s might be enough.

Yet we know the goggled one is a tremendous ball-striker who continues to acquire the most valuable sport and life ingredient of all: confidence.

I take nothing for granted on the eve of a match to decide partial participation in a match I get to watch this Saturday.

At the same time, let’s be honest. A Saturday line-up like this wouldn’t be terrible:

Coric is playing very good tennis. This kid is Djokovic-like. He is pure BL and moving so well, which means he gets to the ball and has more than enough to bring that relentless defense-to-offense interest on his opponent. He went through Vinolas 0 and 3 and then crushed the tough and professional RBA 1 and 3. He’s out-grinding some veteran grinders pretty definitively.

His R16 match with Fritz was a great watch. Up a set, he had Fritz in the TB 4-1 before the American stormed back, saved a MP and evened the contest. At 4-4 in the decider, Fritz had 30-0 on the Coric serve to perhaps get a chance to serve-out the match. But the 21 year-old Croatian held and broke Fritz for his ticket to the QF.

Not sure if any of you saw Fritz v Rublev. I certainly had this one circled and it was a beauty. The Russian is critical. He’s 20 but looks like he’s 34. His tennis doesn’t disappoint. But Fritz just has another gear now; did anyone notice his new mechanic, who seemed to be head-down and crunching numbers every time the camera checked? Paul Annacone.

Back that Coric style. He’s absolutely hammering the ball from both sides, painting lines, retrieving everything and content to park in the back and make these guys run. I got tired watching him (not tired “of” watching him). This is physical tennis; he’s matured a bit, added some strength and brings a very athletic hard-hitting style to the ATP. Hopefully he can sustain this. I’d love to see him and Roger run around the court and exchange recipes. Coric certainly needs some of that north-south movement, which Roger would happily showcase.

Anderson would be a welcomed watch, too, but we should have our fair share of serve bot tennis in the other SF. Del Potro looked a little more vulnerable today, actually, but you’d think he reaches Saturday. What was a bit odd today was a couple of emotional out-bursts from the Argentine, who is normally collected and suspiciously quiet. I also saw him wince a bit after an awkward movement. He’s fine, but there appeared a tiny dent in his armor during tonight’s match with his fellow Argentine, Mayer.

Great to see the professional Kohlschrieber make his way into the mix, but think it might actually take some kind of injury for him to get past DelPo. I guess you never know.

Querrey v Raonic is probably a toss-up, but the bit of tennis I’ve seen from Milos appears to be solid. And he got a w/o from Baghdatis tonight.

His match with Felix AA had a glorious finish. He didn’t appear to be having much difficulty with this teen-aged countryman, bellowing his mammoth serves. Then with the match all but decided, serving at 5-4 for the win, FAA jumped-out and grabbed three break-points. The last-stand was poised from the youngster; this kid has all kinds of game. But the giant, at 0-40, went to his serve and escaped.

Other thoughts on Novak? Sure. But I’ll wait. We have some great IW tennis to watch and digest. No doubt there seems to be quite a journey ahead for the Serb. That’s probably the biggest take-away for anyone. We don’t know exactly what’s going-on with his elbow, his health, his team, etc. But we do know this: he looks lost.

In closing, rememberer my Federer cautionary tale: these youngsters (Rublev, Coric, Fritz and Chung, among others) are wielding the racket with reckless abandon. The awkward and nervous tennis of the lost generation is lost on these guys.

They’re coming to take your stash. They can smell the age, the perfumed decay of the ATP peloton; it whets their appetites.