Fuck the AO and the ATP.

Beyond the injury issues that plague the sport, about which many are concerned; the money — did you hear what Djokovic said at the players-only meeting? and other problems this tour — and society in general — deals with, the Australian Open, as we begin voyage on this new season, has a huge dark cloud hovering over, and I’m not talking about the rain.

I can’t really enjoy the tournament at this point. I watched a bunch of tennis yesterday, parts of several matches, but this is garbage, this transparent (to me) puppet-show where the consumer is the puppet. Remember that. Just as in the greed-soaked depraved world where capitalism and power advance unchecked, the puppets are not the people you see on TV, the puppet-show before your eyes. The audience, you and I, are the ones dangling from those strings, losing control of our ability to discern, organize and speak-up.

This post is not going into Trumpism. His rise to power, again, is more about the audience than it is about him or the GOP, etc. Trump is how far we have fallen. Tough to even wrap our collective brains around this terrifying reality of this uncivilized, ignorant monster pretending to be in charge. This is chaos. He’s not even in charge; he’s just a reflection of us. The party that’s embraced him (the two-party system we know is the real problem in the U.S.) runs the country now. But it’s utter chaos.

Can I connect this to the ATP? You bet your ass I can. The chaotic sinister clown-show that is Washington D.C. and every other part of this world affected (toward ruination) by the commercialized corporate fingers that stretch from that famous and popular western ideology is at the helm of the ATP. In both cases, a particular power is fighting to maintain its reign of inequality. The ATP looks more polished than Washington D.C., less chaotic. Both places/entities perhaps fear the chaos if the regime falls. America’s chaos is on full display. I’m here to help clarify the struggle for power that’s happening in men’s professional tennis.

The fanaticism (Fanboy and Fangirl) that I derail consistently on this blog remains an absolute cancer to the sport. We know that there are several players who have belligerent and incompetent fans representing them throughout the world, daily, hourly, chanting, holding banners, ready to kill and burn the remains of their enemies. I’ve been inside the cauldron online for years and I have seen the shit-show in person at professional tennis matches. Impossible not to see these idiots.

This is more about persona than tennis. This is idolatry. Many of them fashion insight about their hero, but this is not tennis analysis that these fanboys and girls practice. It’s politics.

It really is a trend that’s emerged with the Big 3.  I don’t think one needs a bunch of research to support this argument. Sure there have always been fans. In all sports, in all walks of life. But the Big 3 era has given life to a culture of crazed hooligan tennis fan that works against the great sport of tennis.

Federer, Nadal and Djokovic remain the oligarchy here. I might even concede to the Djoker fangirls that Fedal are at the top. I think Nadal is actually at the top. Why? Because he, of his muscly and handsome determination, with his fierce frown that only enhances the muscly and handsome visage, attracts so many non-tennis fans. Indeed, his numbers are beyond the other two because the appeal of Nadalism is so much more than tennis. His tennis, actually, is the least brilliant of the bunch. Nadal is a cartoon character and his throng of fans involve a sex-appeal that blinds millions of fans and corporations.

Here’s an example of the bullshit of Nadalism that is preventing me from enjoying much of the this tournament. His first match yesterday was against one of his fans. What a joke. The 1 1 and 1 scoreline was sandbagged. Should’ve been a triple bagel. Nadal enabled the breadsticks for the guy to take home and feed his family and friends.

Long may we see @RafaelNadal on Rod Laver Arena!

The World No.1 speaks after progressing through to the second round. #AusOpen pic.twitter.com/F9YaRO1XZV

If you happen to see any of the reporting of this R1 match, it’s like this:

Today we remember a great man and his work. We read his sermons. We recall his sacrifices. We give back. In doing these things, we raise our gaze and renew the spirit in which we serve one another. Such is the calling of #MLKDay. pic.twitter.com/UpNNtZJ8n5

This is not a political blog (sorry, one can’t avoid it at this point), but you can either look-up who this Paul Ryan guy is or just take it from me: he’s a piece of shit. These situations are not what they seem, how they appear. Traditional and social media are giving us all kinds of bullshit through which we have to, sometimes, fight to see the truth of what’s going on. I would have said “light” there to rhyme with “fight” but I do not want to sound corny or conspiratorial or bitter. We’re simply being manipulated by those in power.

AND TAKE NOTE: I AM NOT CRITICIZING NADAL, THOUGH YOU KNOW I’VE CRITICIZED HIS TENNIS WHEN WE’RE TALKING ABOUT STYLE AND SUSTAINABILITY, ETC.

I AM CRITICIZING THE WAY THIS SPORT FAWNS OVER NADAL LIKE PAWNS IN A MUCH BIGGER CONTEXT.

If you read the comments in the Nadal tweet or any such examples of his social media, you can see and hear some of the fanaticism which very much resembles politics.

The Big 3 are part of this 3 party system, I guess. Dissenting voices will get silenced.

The Nadal draw is a joke. He is being given a free pass to the final really, where he will play a depleted Federer or Djokovic or who knows, given how these draws implode, given the weak foundation of the men’s field, the top-heavy absurdly old and rich upper class.  Yep, I can’t help myself here.

This is the story when you go to the ATP website today. “Opens with a bang”? He was playing a 37 year-old fan. Look at the imagery of this match. 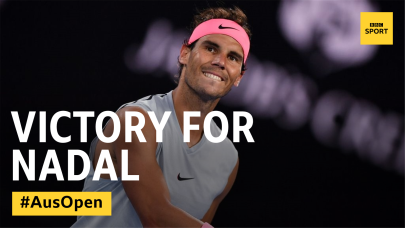 It’s embarrassing. As I have said, he will face no one. Cilic is now my favorite player, just so Nadal has some semblance of competition in the QF. Watching Marin try to close-out Pospisil was like reading news about this great country in which I live. Very frustrating, almost sad. That’s the second-in-command in that quarter. Want to see the names of his little bracket that will make-up his R16? Mayer, Millman, Dzumhur, Scwartzman, Ruud, Dolgopolov and Ebden (and believe me, the Isner loss is nothing as he has been just garbage as of late). That’s Rafa’s competition through R16. QF is almost as bad. Again, I’m now rooting for Cilic, who looks shaky at best.

Those of you pointing to Federer’s draw? He could see Raonic in the R16. His QF gets even more difficult.

The Rafa draw, along with all of the cheerleading for this guy is enough to make a real tennis fan’s stomach turn. There is something else going-on here.

Craig Tiley, the South African-born head of the AO, and Chris Kermode, head of the ATP, for that matter, are guilty of being simple pawns in this great scheme. They are jeopardizing the history and the sport.

Folks, I have been and will continue to quite often see this shit unravel before it happens. This is not a betting site, I can’t afford to gamble really, so this is just me and my crap detector calling like I see it.

In my draw analysis I said Edmund would give Anderson trouble (Anderson gone). I called the Dimtrov/Sock quarter the Dimitrov/Kyrgios quarter, dismissing Sock as much of a threat (Sock is gone). This is what I said about Sock’s R1 match: Look at Sock’s first round opponent’s resume (Yuichi Sugita); he can play.

Nadal’s knee is fine and even more: he doesn’t play anyone until the SF. And those of you saying that quarter looks tough, you’re putting a lot of stock in Dimitrov and Kyrgios. IF they face each other (IF), that’s probably a war. Nadal spanks the survivor like he did Del Potro at the US Open in September (look at the similarities of Nadal’s draw in both tournaments: USO and this AO).

As I said in my draw analysis, Dimitrov is involved in two narratives here: Tiley the Great got all crossed-up wanting the Dimitrov v Nadal SF II, but also couldn’t help himself in letting the incendiary tennis of Rublev have another whack at the Bulgarian in the 3R. The Russian teen took care of Ferrer like a good boy. Dimitrov has Rublev, Kyrgios and then a QF before getting eaten alive by Nadal.

Unless the knee betrays him, he wins this tournament. Yet what I’ve written here remains sturdy interpretation and analysis regardless.

Indeed, the pomp surrounding Nadal is nauseating from a real tennis fan and writer. You can play along with this bullshit you’re being fed by your phone and television, but here, at Mcshow Blog, you will hear it straight, probably too straight. I like my coffee, beer and women honest and strong. You can deduce how I like my sports.

6 thoughts on “Here I Go Again: My Tennis Crap Detector”