Roberto Bautista Agut prevailed over Juan Del Potro today in the ASB Classic final 61 46 75. I tuned-in at the start of the second set with the Spaniard in total control, having dominated the first set, with three service breaks. Del Potro looked tired and the match call confirmed this. In fact, Tracy Austin actually pointed-out as the second set got under way and Del Potro held in the first game that Juan knows he now has to win two sets from this guy (RBA), so he might not exactly dig very deep here. Her comment made sense, since RBA is such a grinder, doesn’t give an opponent much at all in that classic almost frowned-focus of a work ethic reminiscent of this era’s several Spanish players.

Del Potro got back to work and his serve carried him through the second set. He did find his stroke, as well along with some errors from RBA that gave everyone a sense that Juan might be able to finish this thing. He broke RBA in the tenth game of the second to secure the set and send this to a decider.

But we’ve talked about Agut many times in this way: he is smart, focused and has a solid hard court game with a FH that can really dictate even against a big guy like Juan. The third was even until Juan’s serve faltered a bit in the eleventh game, he went down 15-40, saved one BP with a massive ace, but faltered, giving the Spaniard a chance to close it out on his own serve. Juan saw one BP in that twelfth game, but RBA came-up with a courageous short-angled ace in the deuce court that brought it to deuce and he was able to take the match from that point.

Tough to read Del Potro here. His BH is still an issue, but there are points where he can or does pull the trigger on a flatter BH DTL with pace and some top-spin that finishes a point. He has that shot, which, as I said in my previous post, was on full display in that first set of the USO SF against Nadal. He had command and the BH made him that much more difficult to beat. But the slice is still a big part of his game, and players go to that spot relentlessly.

The other read is his fitness. Is he ready for a multiple-course five-set affair with the world’s best, in the heat of major in Melbourne. He comes right out of the gate against a solid young American in Tiafoe, then gets another young gun in Khachanov, only to survive that and meet Berdych in R3. Then, potentially, it’s Goffin before Federer.

Sure I’m thinking out-loud about that dark horse pick. As with most of these guys, they just need to survive some of the early matches and get that head-of-steam as they roll into the second week and beyond. Juan is that kind of player for sure.

He said after the Auckland final that he didn’t actually expect to find the final in his first tournament back. So he sees the positive here, naturally.

Finding that major tournament fitness is clearly on everyone’s mind. Some of the concern about Nadal and Djokovic involves their lack of match play. They pull-out of these tournaments to rest and get the body right, but sacrifice the valuable opportunities to build that critical match fitness and rhythm. 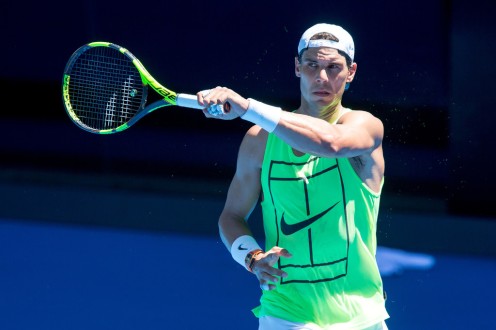 One very interesting story that surfaced today was news that Rafa and Thiem were able to secure about 2 1/2 hours on Margaret Court Arena with a chair, line judges, Hawk-eye, ball boys and girls, etc. (TC had just a still photograph of the match). Apparently, spectators were able to watch as Rafa and Thiem got to split two sets and go to a TB, where apparently Rafa prevailed 10-8. The main point here, of course, is that these two players got that amount of practice with legitimate match elements (oh yeah, the speed sensor was working, as well, for serves). Here’s actually a report on this event, but I heard about it watching Tennis Channel.

The TC crew (Ted Robinson, Tracy Austin, Lief Shiras and Mark Knowles) mentioned how this was great for Rafa, but could cause a little controversy. It’s really neither here nor there at this point — what’s done is done.  But Knowles, world #1 doubles with multiple majors back in the early 2000s, said this was very interesting and quite unfair for the rest of the field. I mentioned in a previous post how the tour inequality is entrenched and problematic. This is a great example.

But this comes back to fitness. Rafa tapped some serious privilege there to get that practice time, which he and Dominic turned into big-time match simulation time. Sounds a little desperate; they might catch a little heat for the stolen goods!

Coming back to that discussion of a favorite in the men’s AO, it isn’t only Federer’s form people suspect is still 2017-like, but that he’s healthy and his bit of Hopman Cup play certainly gave him some good match mileage. Not to mention: he isn’t nursing an injury (at least that we know of; then again, having watched him virtually fade at the USO and in London, that back sensitivity has to be on his and his camp’s minds. . . always. He’s done when that acts up; one could see this with his or her own eyes).

Federer, Kyrgios, Dimitrov, Zverev, Thiem, Del Potro, guys who were able to get some matches under their legs the last couple of weeks and seem 100% healthy are naturally bigger on people’s radars.

As “they” say with grand tours of cycling, can athletes ride or play themselves into form? We can quickly surmise how a two week tennis tournament consisting of only a handful of matches, probably not so much.

Watching the Auckland final tonight, wondering if Del Potro has the fitness, I thought a little bit more about this issue. And given our concern, especially, of the top of the food chain, we center the question at the legends with question marks: will Nadal and Djokovic have enough in the tank?