Time to talk some Melbourne major men’s tennis aka the 2018 Australian Open. Of course, the draw is out, and two main ideas are crystal clear: Nadal has a cream-puff draw and we have more uncertainty about players’ chances than ever before (including Nadal). Not sure how we can even call a player a favorite given his circumstances (simply too much uncertainty).

But before we get to the draw, here’s a little follow-up to my last post. This guy Perotta writes for the Wall Street Journal, not your most dependable sports journalism — not your most insightful column. I believe I’ve referenced this guy before and I might have to give him a partial pass only because of the rag, the WSJ. Maybe he’s a terribly interesting fellow over a couple of beers talking a little sport. Maybe his boss keeps him in a commentary kennel, so to speak (maybe I just stumbled upon a good tagline for my blog: Who let the dog out?!). Either way, his stuff is often soft and predictable.

Here’s an excerpt of a piece he wrote on Djokovic’s 2018. This continues the discussion of O’Shannessy, Djokovic’s strategy coach.

“O’Shannessy often works with Djokovic by email. The notes he sends cover strategies and shots that could lead to success. O’Shannessy encourages Djokovic to play more short points, which he already excels at, despite his reputation as a long-rally player.

‘We tend to forget all the shorter ones, and particularly returns and serves,’ O’Shannessy said. ‘He’s a god in that area. He doesn’t get enough credit for dominating the short ones.’

Another way to improve his dominance even more: Go to the net. O’Shannessy said Djokovic is underrated in his abilities there, and could use them even more.

‘If he can be a monster at the front of the court as well as the back of the court, it would make points shorter and it will be a longer career. Roger is a great example of this,’ O’Shannessy said, referring to the net-attacking game that allowed Federer to win two Grand Slam titles last season at the age of 35.”

Wow, now there’s some interesting analysis. Djokovic needs to shorten the point and come to net more, which is a great strategy for shortening the point; in fact, Federer used this particular strategy last year, helping him win two GS at 35 years of age.

Think of the possibilities! Djokovic is only 30! So, if the Serb can only execute more of this style of tennis, imagine his potential!  Use more of this short-point approach and come to net more! I smell a winner winner, chicken dinner!

Are you kidding me? Not sure who looks worse here, the strategy coach or the writer. Unreal. Sorry for that digression.

On to the Melbourne draw: 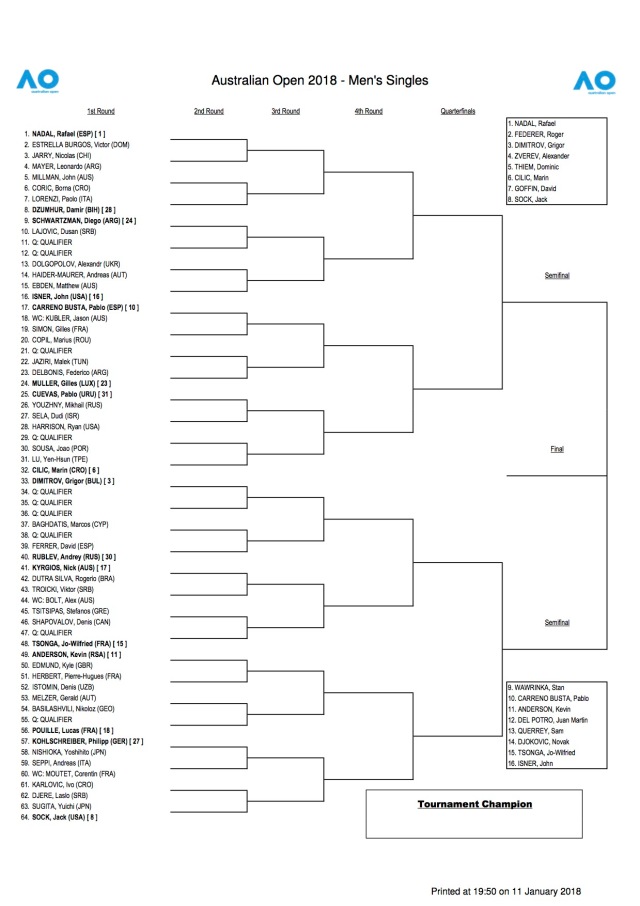 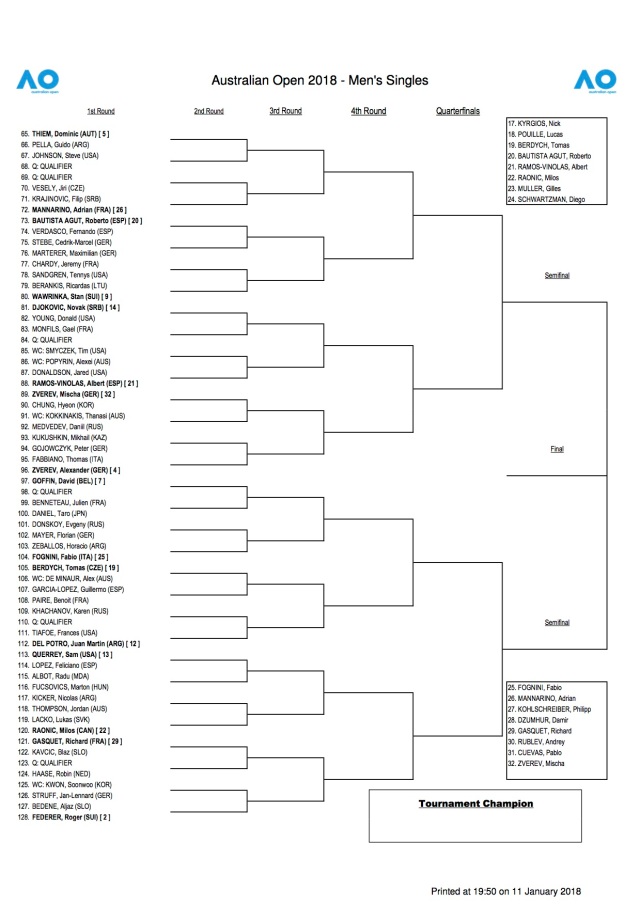 I’ll be back tomorrow to spin some commentary on this mess of uncertainty, along with some other thoughts as we get ready to rumble down under.