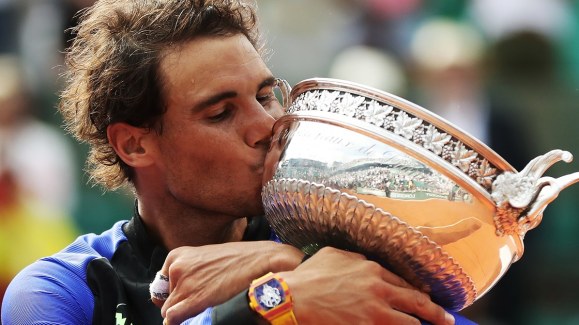 This post started as a return to the contemplation and reconciliation of Nadalism.

At the end here, on the eve of WTF, I’m confounded by this contradiction involving Nadal. But the appearance of the Fedfan on my blog broadens this post since Nadalism is this institutionalized bias toward the Spanish great and we all know Fedfan shares this oversized enthusiasm for

their own star (I think I have a lot of Federer fan readers, we are all fans of Federer of course, but my more passionate readers, I think, have the wherewithal to keep their wits about them).  For sports fans, enthusiasm and passion are a huge part of the playing field, so to speak, granted; but I have clarified on several occasions how this can turn to fanaticism and, voilà: you have what can amount to an ideological booger. Mcshow Blog is not a waste bin for your booger, fanboy.

Speaking of fanboys and girls, did any of you catch some of the social media aftermath of Roger winning several awards yesterday? The back and forth concerning, especially, Federer’s sportsmanship recognition is a five-setter on the toilet. This is bottom-of-the-barrel bullshit from people who can’t see the forest for the trees.

Let’s get to work.

Nadal’s rise to #1 is truly astonishing, but is it?

Here’s the contradiction:  I have this impression that Nadal hasn’t been consistent enough throughout his career, year-round, on all the surfaces, at all the “big” tournaments, that despite his clay concentration and other huge accomplishments (H2Hs, majors, masters, etc.), he’s been less of a champion than some of his competitors and historical comps. Part of this argument, by the way, has concerned his style, which might actually be all that’s left when I get done “reconciling” this contradiction. For what it’s worth, that 2017 U.S. Open, where he’s camped 35 feet behind the BL, made my skin crawl. My bad.

So, where does this guy fit into the grand scheme of men’s tennis greatness?

I think I’ve been wrong in my “calculations” and this aforementioned “impression” has, indeed, been part of my own bias. My claim that in 2012, for instance, he was on the proverbial Medical examiner’s table is flawed.

I might not be so surprised about his 2017 return to #1 (remember, we’ve qualified this already, as well: Djokeray absent, Federer 36 years-old, and the “youth” of the tour a bunch of scared, orphaned kittens).

A post like this is partly a glance at my brain researching parts of a bigger narrative, such as one that I’ve already drafted (HeR FaRT) or others that I have in the works: in the end, this blog is a giant narrative of men’s tennis, hopefully spanning several years. Conveniently, I can just organize some of the pieces into sharper, more crystallized accounts and arguments that better tell the story for interested readers as the time comes and/or the stories manifest themselves.

And I do want to thank that Fedfan for his trouble: he inspired that PSA for the Clown Show; I have a growing assortment of such reprimands or diatribes. Thanks again, fanboy.

For sure, Nadalism is personal: I have to reconcile my Nadal phobia. As 2017 progressed and I watched him play, rise and shine across the men’s championship landscape, his quality did seem almost natural; again, 2015-16 wasn’t that long ago and that latest form failure had been filed amongst the other issues and inconsistencies I’ve seen with Nadal.

Consistency is a huge factor, at least in my “book.” This has been my primary issue with Nadal.

I said earlier that Nadal looked to be fading in 2012. I wasn’t perhaps following as closely then as I am now, but this does look like a flawed account of Nadal that I was writing. Or was it?

Sketch of his rise and fall. . .and rise

As he burst onto the scene in the mid-aughts, he began his initial rise. He was #1 by 2008. This, of course, is the year he won Wimbledon for the first time. He had arrived, establishing this first break from the clay chain. This was his 5th major, adding to his four FO titles.

2009 was an odd year in that he got his first and only AO, but then seemed overcome with injury as he was beaten at Roland Garros, and withdrew at Wimbledon. He did make the USO SF that year, but he got absolutely mugged by the surging Del Potro 2 2 and 2.

2010 was a return to form, especially as the season wore-on. He retired in his QF match with Murray in Melbourne, but then won the next three majors. Back to #1.

Then the rise of Djokovic, seemingly, which complicates the picture. Djokovic owned 2011, winning three majors. Nadal won his customary French title, but relinquished #1 to the Serb.

And this is where I go wrong (or do I?). How can I argue that Nadal was going away when the following events took place:

The 2011 Wimbledon and U.S. Open finals were Djokovic wins against Nadal. Nadal is still around, big time.

The 2012 Australian Open, we recall, was the great Djokovic v Nadal final, the Serb consolidating his 2011 ascent in a breath-taking (for many) five-set war.

The absence at the 2012 U.S. Open extends to the 2013 AO; he misses two majors in a row, following a 2R dismissal at Wimbledon. That seemed a bit like a ship grounded and listing in the heavy ATP surf that was a charging Serb, Murray still growing, and Grandpa Federer always lurking.

Then the iconic 2013 FO SF between Djokovic and Nadal, Nadal prevailing in the fifth 9-7. Imagine that going differently? That was his big comeback from the dead. So, in a way, I was right that 2012 and even early 2013 seemed like the Spaniard was sputtering.

He follows his eighth FO with a 1R dismissal at SW19. Again, that Nadal rollercoaster. And it gets better. He wins his 2nd USO that September and goes on to finish #1.

His journey from 2010 #1 to 2013 #1 was a mess. He remained, I will argue, buoyed by that red clay and took enough time-off here and there to make some significant runs at majors not on clay, really the 2010 grass and N.A. hard courts and 2013 N.A. hard courts. We’re not looking at Masters titles in this time-frame, but his summer hard courts were fairly successful; he swept Canada and Cincinnati in 2013.

This is so complicated because of the other players Nadal was battling for these titles, especially Djokovic, who came along just in time to prevent Nadal from really running amok on tour. That’s another discussion for another day.

So, where do I come-out on this? What’s up with Nadal? I do think it’s important to put Federer’s time-off in 2016 into perspective; that was his first extended break from tour. Nadal has had several “breaks” throughout his career. When this kind of time-off is granted, players can return full of health, fitness and form. People want to point to Federer in 2017 as a good example, but this has been Nadal’s M.O. throughout his career.

We will see how this informs Djokovic, especially, in 2018.

And we know part of this inconsistency with Nadal is his playing style. This, supposedly, explains his extended absences. But it is also something to consider. When the Nadal fans have been naturally offended by the drug accusations, they’re going to have to take some of that because he’s missed extended periods of tennis, only to return to form and continue to win majors. Either way, that seems a bit unconventional, to say the least.

I am not calling him a drug cheat. But these down-cycles in his career have to be taken into account either way. In the end, I think he really is just injured a lot.

I decided to revisit some of this narrative at this time because of the WTF, kicking-off tomorrow.

In this story of Nadal, this year-end tournament has proven to be a huge problem. One can complicate and reconcile until he’s blue in the face the career of Nadal. He’s one of the greats, no doubt, in all of his peak-to-valley-to-peak complexity and phenomenal competitive greatness and nuance (and obsessive compulsive disorder).

But the WTF has eluded this particular great. There is no argument here.

Which is part of my conjecture that this will be his year, as I think such a mark (zero WTF titles) is a tough pill to swallow in this gargantuan debate and tennis discourse we know and love.

Indeed, the idea is that the tennis gods would provide this vulnerable champion his missing treasure.

My brain says Federer’s form is too good for any of these top eight. He thrives on the indoor court, at this time of year (especially with the Serb on the shelf). Federer’s new and improved offense (and defense, especially that ROS) should prove to be tough for these youngsters and even Nadal to overcome.

I will say, however, which I almost always warned even back in 2015 when Federer found so many deep draws and Djokovic standing between him and the title: he has to serve well. When his spot serve is as brilliant as it can be (110 mph aces), he is virtually impossible to beat at this point.

But stranger things have happened. And now that Moya’s insistence that Nadal is 100% is being countered with Nadal’s own recent suggestion that his knee is not 100% and that he could, in fact, not make his match Monday. . .who is to know.

We will have a much better read as play gets underway.

7 thoughts on “Nadalism/FedFan and the WTF”