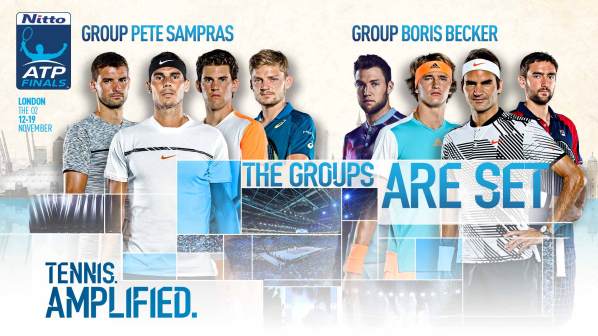 Between little posts like this and comments from you all, we should be able to keep the tennis IQ pretty high as these men enter battle in a couple of days for a very prestigious title at the 2017 Nitto ATP Finals.

Let’s get this out of the way: seeing someone other than Fedal win would be a tremendous development, for this guy’s career (whoever that may be), and for the ATP story going into 2018. Just as all of these “youngsters” try to forget their 2017 beat-downs from Fedal, here comes Djokovic (on a mission), Murray, Wawrinka, et al. The “middle and lower class” of the tour need all of the help they can get; and a win from the non-Fedal contingent in London next week would bolster the rebel forces (the Star Wars analogies work too well).

Dimitrov winning is perhaps one of the popular dark horse wagers. His in-form tennis can be a struggle for any opponent. This would be a huge final statement on 2017 if the Bulgarian can come-up with a title here. Making the final would be very promising, but that’s not enough at this point, for this guy. Dimitrov, as many have, would get Federer in a SF. A win there and he gets Nadal in a final. Deja-vu or breakthrough? This guy has the tennis to challenge, but can he slay these dragons? The time is now, Grigor.

Thiem is so fun to watch, a run from the Austrian would be unreal, as in marvelous. But unless he can come-to-net a bit, finish some points more quickly, hit that BH DTL as well, find his diabolical serve. . .he’ll just continue to fatigue in this hard court of tennis jurisprudence. He is way under the radar here, even from my vantage point; but his form can be electric and Thiem, who’s had success against some of these other top guys, isn’t afraid. The concern is his record of late, but I remind everyone to imagine if Del Potro doesn’t come back from the dead in that 4R USO match: who knows but then again, who cares? Such is the way of the tennis court room and Thiem needs to make a brilliant closing argument on his 2017 case. Beliem in Thiem.

Goffin is here for a reason. I still think next week’s Davis Cup final and his overall game doesn’t quite set-up here in London, but who knows. If Nadal is vulnerable, hopefully Goffin can expose that with some sharp ground strokes and tennis fortitude. Nothing to lose should be the Belgian’s motto.

Zverev is another outsider favorite. He’s won some big matches, beaten some big-time opponents. Many have him in the SF with Federer.

Cilic has the game, obviously, to win some matches, too. He’s done okay on hard courts in his career 😉

Finally, Sock has to be flying pretty high right about now. What a year. IW SF, Laver Cup, Paris and now London, just to name a few. He could be peaking at the right time and with a new lease on life (maturity), who knows.

Seeing the pictures of the WTF gala, catching word that Federer is gobbling-up year-end awards, etc., the collective non-Fedfan contingent (hopefully even the players) have to have had about enough. Too good from Federer all year. Embarrassment of riches.

That’s a big reason I don’t see this ending with Federer. I sensed he was primed for Shanghai and Basel when I called those victories. Here in London I don’t see the Swiss holding the trophy. If Nadal declines and Federer’s Becker boys only want an autograph from the Maestro, well, then it’s full-steam ahead for the FedExpress.

But there’s a twist here at the end; I’m just giving you a heads-up. The tennis gods, tennis narrative, history, the rebels vs. the Evil Empire, whatever you want to call this or however your planets align and spin: What started in Melbourne in January ends here in November London, in the cold, where 2017Fedal will finally come to a close. . .

Yes, aside from the fact that I beliem in Thiem, I also believe in karma (macro equilibrium, balance, etc.). Federer winning here would break the scales.

Another post is coming later today, in which I continue to reconcile my struggle with Nadalism. Is it fact or fiction? Am I onto something or living next to that big river: Denial? The complexity of it all. I love it. And love hashing this out at Mcshow.

To be clear, I can’t wait for Sunday morning PST when this 2017 Nitto ATP Finals gets to tossing some tennis balls into the air. Get your popcorn ready, folks.

Stick around here for discussion and more analysis. We’re just getting warmed-up.