There really isn’t anything to say at this point about the tour currently other than it’s a trash heap. The post-U.S. Open ATP play has been so underwhelming that it seems worthless to even have a tennis blog. 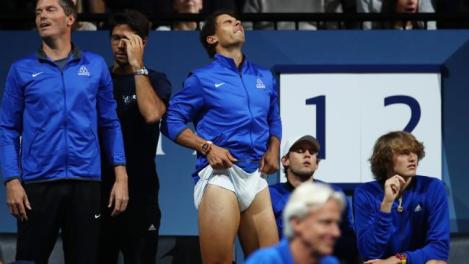 Sure the Laver Cup was interesting, especially the optics, watching Fedal play doubles, watching the players from both sides cheer-on matches, the emotion, the team work, all of that pretty interesting. The Federer v Kyrgios was a good match. I missed the Isner v Thiem tilt, but that seemed to have some solid drama.

Fedal has decimated the tour. Sucked the air out of the building. The tennis at this point just seems so minor key. Who won in St. Petersburg and in Metz? Just a drop-off of massive proportion.

Chengdu this week screams mediocre, if that.

Shenzen is equally as poor; Goffin, for the love of tennis, add that 250 to your case.

I’ll probably be doing all kinds of weird shit on this blog for the time being.

The only intrigue left is if Nadal can finally win a WTF. Roger’s case has been made this year, this career. Nadal’s too, but that USO crown was tough to stomach and even Toni agrees with me.

My blog’s claim to fame should be the consistent coverage and intelligent angles I can take when analyzing the sport. But it’ll likely be my HRFRT book when I finally get around to writing the Ebook version and selling it to whomever is around to enjoy that analysis (to sell or not to sell).

HRFRT is already a genius concept, hatched in 2016, at what seemed the end of Federer and Nadal, in the wake of Djokovic’s run.

Think of what 2017 Fedal does to my thesis. Good heavens I bought nice and early on that rising stock, so to speak. That’s when you know you know a few things, folks. You know what I mean? No?

Remember, there’s a part of that book that entails the monsters Federer created in his ruination. Federer created two monsters: Nadal and Djokovic. I wrote the rough draft of the Nadal chapter. I have yet to write about Djokovic’s significance other than he is a product of Federer’s ruination.

But see there’s more to the Djokovic story.

Djokovic saved tennis. That’s part of that history that I’d planned to write last year. He’d already saved the sport despite being found guilty as well in association with Fedegeddon. But there always has been more to Djokovic. Even this year adds to this Djoker significance. I might’ve lost you. Stick around.

Almost anything worthy of analysis and conversation is rife with paradox. Put that in your pipe.

As we turn to the end of times here in 2017, we need Djokovic to save the sport again.

I know this only means the Djokerfan will ring louder in our ears. But be fair. Think of the nightmare they’ve had to endure in 2017, with that Laver Cup as a version of some kind of climactic tennis pornography for the Fedal fan bases and anyone else vaguely familiar with the sport.

Indeed, as Nike takes a hit from this college basketball scandal set to disrupt that sport and hopefully many others with the obvious corrupt role that big corporate dollars play, this global shoe and apparel monster can probably sleep quite well at night in light of 2017 Fedal.

I don’t want to overlook the roles that Murray and Wawrinka, along with some lost generation boys, will play upon healthy returns to the tour in 2018; but Djokovic’s top form is needed again, badly.

If you disagree, you’re a fanboy. Which makes you pretty normal, I’m afraid. I guess it’s safe to say that I’m the weird one (other than my skepticism of Nadal – oh yeah, I have to write that wrap on the 2017 USO!). Speaking of paradox, as critical as I have been of Nadal, even I had to enjoy his role in Europe’s LC win. Guilty.

Yeah, as I write this little putzy post, I see the need to keep her going.

3 thoughts on “Federer Ruined (Djokovic to Save) Tennis”