The bottom half SF is set with Anderson v Carreno Busta. Yikes. I did not see the death of Schwartzman yesterday, but did watch a bit of the night match. Querrey looked weighted down by expectation or something. He looked awful with no urgency on his ground stroke, his second serve coming in around 100 mph, etc. Not a good look from the American. Even the crowd wanted to get behind their guy. But he was flat. No visual energy, body language, and his ground strokes were sitting up, short, safe which the S. African destroyed.

Between his monster serve, his attack of Querrey’s second serve and his missile-like ground strokes, I joked that he’s playing the best tennis ever. He pumped his fist after EVERY won point, pep-talked himself constantly. . . the difference in energy alone was massively one-sided, like the tennis.

Even Querrey winning that second set TB couldn’t get the American rolling, losing the next set 2-6. To open that third set, coming off the dramatic TB, Querrey had looks at a BP, which could have really propelled him in that third set. Didn’t happen.

Huge difference between that and his demolition of an in-form Zverev. One win from a SF with Carreno Busta. Either of these boys last night would be favorites against the Spaniard, meaning probably a trip to the final with a win. Anderson played like he knew the stakes and knew the lifetime opportunity. Querrey shrank.

The way the top-half of the tournament should play-out is a good HC player should survive. Nadal, as discussed, looks uncomfortable even though the surface has been slowed quite a bit. As slow as AA is this year, the flatter more versatile player should still advance.

Federer has his hands full if Del Potro is healed. That was an amazing match v Thiem; he should have been dismissed, but simply rose to the occasion and put it to the young 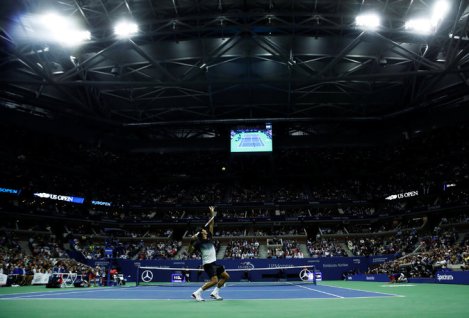 Austrian. Brilliant tennis. All of you (probably who don’t read this blog) who advocate some kind of Bo3 in the majors, should back away from whatever’s causing you this lunatic garbage. Go get your brain restrung. Del Potro, like I said, is such an inspiration.

I’ve been wanting to say this for a few days: I don’t trust Federer’s back. As clean as these last two matches have been, he just doesn’t seem quite right. The MTO after the second set against Kohlschreiber wasn’t a good look. He’s playing it off, but he just seems a string or two off.

This QF and SF will test the back. I think reality could set-in here; that’s a big ask: to beat Delpo and Nadal back-to-back. If he’s not bothered by the back, he should be too much for anyone, but his next two opponents are the type to really test his health. Delpo and Nadal will go five sets fighting until death. The reality of Federer’s back will be determined now.

Nadal should be way too much for Rublev despite the youngster’s form. Or is he on some kind of historic run? I watched a little replay of that first set of Rublev v Dimitrov. Dimitrov should have been many people’s dark horse here at the USO. He served for the first set at 5-3 against the young Russian and lost that set 5-7 (and the next to sets). Pretty remarkable, really, even if Grigor is a bit of a wanker.

No way should Nadal lose this match. Question: how many matches has Rublev played on AA? I would love to see a good match, but suspect this could be a similar to the Dog match. Nice draw for the No.1 seed, no?

Is it destiny, folks, for Nadal to finally face Federer at the U.S. Open? Or will reality set-in on one’s aging body and the other’s surface difficulty?

I’ll be keeping watch on the teenager and then the back as the two factors that could crack the case. You have to think tonight’s match should be massive tennis theater.

Get your popcorn ready.

PS
Of course I see what’s happening on the women’s side. Will it be four Americans in the SFs? The Vandeweghe v Pliskova match today should be a doozy as I think they don’t like each other, Pliskova defending her No.1. Sounds good to me.