I start work, another fall semester, next Monday, but this is only a casual coincidence (or is it?) that the year’s final major about which we are fairly interested also takes-off and hopeful

ly soars, lifting our imaginations (academic and tennis, to speak of at least two) to ever terrific heights, of which we will be transformed along with those around us (hopefully), inspired, buoying our everyday lives, marching, we can hope, against “the unmistakable tokens of death” (Woolf).

No question that’s what this or any sport or entertainment provides us with – an escape and a metaphoric antidote that, at least momentarily, can move us toward better outcome (and even greater, more specific victory if a tennis result, for instance, carries that much personal or patriotic weight).

One can see the struggle here as I want the blog where I engage in the tennis discourse to coincide and correspond with my real job. Indeed, the two do relate, no doubt. But I want more.

Admittedly, the excitement of a new semester is anxious and intoxicating – the possibilities of working well with others, pushing each other to read and write with more purpose and insight than before, developing perspectives and arguments, growing individually and, we hope, culturally.

There is a lot of hope, even in this post, evidenced by a simple scan of the language above.

I am not only going to hope, however. The work here and there will only become more focused and purposeful. What exactly is the focus, the purpose? To see things more clearly in order to advance more precisely on those meanings and the incredible journeys that reside in the significance of this work.

A lot is at stake next week!

I know you are with me on one account: The United States Open Tennis Championships.

There are several thoughts we all have about the possibilities of this two-week explosion of major championship tennis.

Nadal’s No. 1 seed really prefaces his challenge to end-the-year as No. 1. These sorts of milestones and discussions are great for the historical (and more advanced and accurate) view of the sport.

As one can see from the linked article, Nadal could really add to this phenomenon, we might call it, of losing and regaining the year-end No. 1 ranking.

Look at the second table that provides a list of year-end ATP No. 1, which translates to dominance of the tour, naturally, as the season ends and preparations are made for the next campaign.

I have referenced Pete’s numbers there a few times, even recently. Look at that run, of consecutive year-end No. 1. As I clarified, this streak of dominance really wore-out the American, pushed him to play in ways he would not have had he not been chasing that highest level. 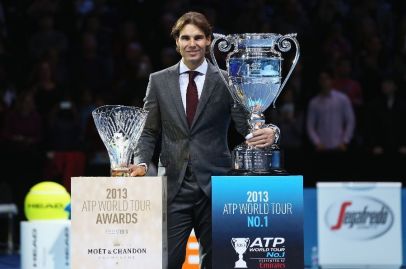 Nadal will now go head-to-head against Roger and Andy through to the WTF for this year’s year-end No. 1 (currently, 1-3 goes Nadal – Muray – Federer). If you listen to the players, most put a lot of value into this distinction. That ranking, as it’s reflected in tournament seedings and especially what it signifies at the end of a year, carries a lot of meaning for players, not to mention what it means to fans and historians alike.

Murray has a few thousand points to defend here at the end of the year. Nadal and Federer have virtually none to defend (Nadal, I believe, has a couple hundred vs. Federer’s zero).

NYC will be an interesting and glorious first stage for this race to year-end No. 1. Hopefully the men are healthy and on form. Will be interesting to see where Federer lands in the draw. You would think he’ll be in Murray’s half, but we’ll have to wait on that and other insights for the 2017 USO draw.

This week some of the men are making last minute claims on entry into the NYC draw, or something along those lines.

Did you catch the play and commentary of Dolgopolov’s R1 Winston-Salem match with world No. 144 Thiago Monteiro of Brazil? Looks like the Ukranian, who lost to Kyrgios last week in Cincinnati R32, threw the match against Monteiro.

What I find interesting relates to the role of the blog in the reporting of the story. Granted, I may not have stumbled across a better mainstream news article that provides detail of this horrifying story, but the blog I did see absolutely dwarfs the few newsy, mainstreamy articles I found.

Trust pops-up as a big-time concern here, not just with players on tour (athletes in all professional sports) and with the sport’s supposed integrity police (the TIU: literally, the Tennis Integrity Unit), but what about those reporting on these issues?

I’d like to think that’s part of what drives the relevance of (and interest in) Mcshow Blog: we’re honest, passionate, analytical, and insightful. We have in mind to (as reader RJ put it recently) “keep it real.” No doubt.

Hence part of that anxiety of next week: back to work when all I really want to do is cover tennis! And true there’s some anxiety, too, in that upcoming announcement of the draw, along with the championship caliber Bo5 that will ensue.

I needed to tie the two back together; you know, about a week out. 😉

One thought on “About a Week Out”