Here’s What we have already said about 2017 Dimitrov. Those posts pertain to January which include Dimitrov’s Brisbane title, a very impressive start to 2017 indeed, which advanced an understanding of his form in Melbourne. The year began quite well for Grigor, something we noticed and marinated appropriately, given the Bulgarian’s variety, classical style and the tour’s glaring need for candidate contenders beyond the O 5 (old five – Fed/Rafa/Nole/Andy/Stan). 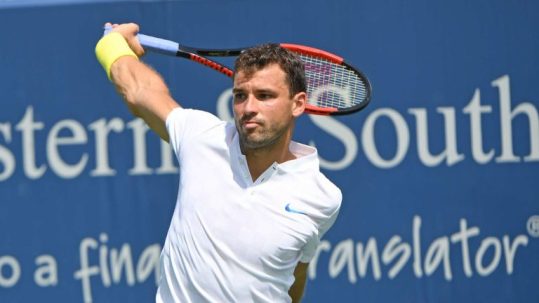 The final yesterday in Cincinnati between Kyrgios and Dimitrov had the potential to be a classic, but didn’t quite live-up to that; none the less, we saw some very good tennis at times from both, Grigor proving more certain of his game plan and executing more consistently.

Both sets boiled-down to a break of serve, but many might’ve predicted Grigor as being more vulnerable on serve. Not the case, at all. I believe it was only Del Potro who was able to break Dimitrov the entire week, once. That stat alone speaks to his form and difficulty players had against him.

Kyrgios’ serve is what most might have pointed-to in terms of the Aussie’s advantage in this match. But this just wasn’t the case. Through the first set (this trend almost certainly stayed true through the second, as well), Dimitrov out-paced Nick on serve 124mph to 123mph, on average. That’s a big tell-tale sign. Kyrgios should, one would think, be on average, first serve, in the low 130s. He just wasn’t using that big serve which could speak to health, strategy, or motivation. He threw-in the occasional 136mph or so, but this was rare and probably a fault. His serve was not the monster we’ve seen in some of his bigger matches.

Having said that, as I mentioned in my preview, Dimitrov had handled a big serve in the SF pretty adequately. Nick would need more than just a big serve, but we can suspect that more on that shot would have improved the Aussie’s chances considerably; that threat didn’t manifest in the final.

That post I link to above that I wrote back in January (“The Grigor Potential“) goes into his coach, Dani Vallverdu. This provides some background on this aspiring coaching genius who has worked with Lendl and Murray.

Vallverdu was a big factor in the Cincy final. Recall Murray’s H2H with Kyrgios, which I included in a recent post; Murray is the outlier when it comes to Kyrgios’ success against the O 5 (old five). Murry is 5-0 against Nick and if you look at those scorelines, you will see that Murray hasn’t had very much difficulty with Kyrgios. Why not?

The answer to this question transpired on Sunday in the Western & Southern Open final.

We all saw Grigor focus on two primary strategies to trouble Kyrgios: 1) attack the FH and 2) throw slice at him, keeping the ball off-pace and low.

Those were strategic though the Bulgarian’s serve, defense and offensive variety played huge roles as well.

We know Murray’s game well. He’s very defensive, sits back, does less with pace than the offensive-type. Taking pace off the ball like that is an effective strategy against Kyrgios. Players that use more pace against Kyrgios get into bigger exchanges, which the Aussie, as we can see, prefers.

And the slice from Grigor that kept the ball, in addition, low also troubled Nick. This sort of variety gives many players problems; we know this. This particular strategy kept Nick off balance all day. This had to be part of the discussion in Dimitrov’s camp.

Some of the cause too of Dimitrov’s win, however, has to go to the Bulgarian’s sheer effort, execution and perseverance. He stayed focused, played well in big points. How about the two break opportunities Kyrgios had in the first set. The first one was especially impressive from Dimitrov, who just outplayed and outhit Nick. Grigor loses those two points, just the first, and that’s probably the difference in the match, in the result. So, give Dimitrov massive credit for just playing well when it counted, keeping balls in play, hitting both his FH and BH well, ending points at the net, and even tempting Kyrgios to play to his FH, which Nick did on occasion, only to get in return that Dimitrov running FH that adds so much class to an already heady game.

All of these factors were in store yesterday, but there’s another one we need to consider.

Nick played with a lot of class yesterday; in no way did we get any whiff of a tank or a debilitating tantrum. This is very good news for tennis fans who want to see Kyrgios rise-up on this tour and show us more of what he can do with a tennis racket year-round. His end-of-match exchanges with both Ferrer and Dimitrov (two that I can recall) were gracious and intimate; this is a huge step for the Aussie bad boy.

But one could suspect that Nick didn’t relish this sort of match-up the way he does when he plays one of the top guys like Nadal, Djokovic and Federer. Nick might just relish that underdog/spoiler role more than he does being the favorite.

He could still be battling the hip soreness, which would have hampered his game here in a final after several tough matches. The strategy from Dimitrov didn’t help Nick either; when Kyrgios has to create pace, he’s out of his comfort zone. The Kyrgios BH broke down yesterday, but that had a lot to do with having to deal with the low and slower slice coming at him throughout the match.

But we have to wonder a bit about his engagement, still. He was classy and played well yesterday. But his game lacked that firepower, from the serve to his explosive ground game.

We will not take anything away from Grigor, especially here at Mcshow; his diversity and class (an all-court one-handed game for the ages, potentially) dictated yesterday’s outcome as much as anything. But Nick, some might have wondered, seemed to underwhelm a bit as well (don’t worry: two things can be true).

Here’s the most important take-away. Nick and Grigor have to be pumped heading into next week’s U.S. Open. Both showed some real gritty tennis and we know when these boys are on form, they’re very difficult to beat. 2017 ATP highlights, aside even from Cincinnati, would include tennis from both.

Add Cincinnati to the mix. These gents are tested and ready for battle (get those hips 100%, Nick).

Stay-tuned for some build-up to NYC. This is, year in and year out, the biggest major of the year.