The first question is the title of this post: How big of a deal is No. 1 in our glorious sport? I’ll undermine my typical long-and-windy by clarifying for everyone that No. 1 is very important. 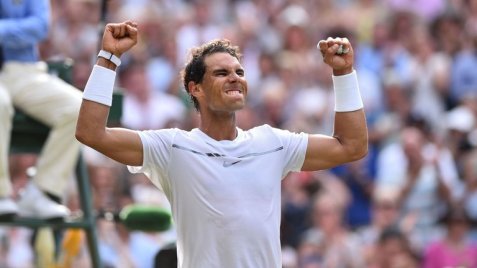 This means Nadal’s achievement is massive, incredible that he’s doing it at this age, in and amongst these other giants of the sport playing pretty decent tennis the last few years, including this year. I’m talking about Fedjokurrinka. Nadal has claimed the top spot playing with those gents still giving the old sport the old go, as well. 🙂

But you should know this from either following this sport for longer than ten years, or hearing perhaps words of clarification from the likes of Federer (even recently) and Sampras (more so after retirement due to his professionalism, so more recent). Two of our most recent giant No.1s of the sport have made crystal clear how important No.1 is: extremely.

Proof? Federer holds the record at consecutive weeks at number one (the metric) with 302 consecutive weeks. Sampras is No. 2 at 286. Lendl is third, Connors fourth, Djokivic fifth and so on.

Federer recently talked of how important this achievement means to him personally, with regards to his 2017 goals. This is a massive indicator of one’s consistency (the true mark of greatness) and success. He has age to add to that accomplishment, of course.

Pete, if you know his story, pretty much ran himself and his career into the ground chasing the consecutive year-end No. 1 record (a variation on this very significant theme in men’s tennis); he finished year-end No. 1 six consecutive years. Yeah, your knee-jerk, some of you out there, might try some kind of week-era point of contention. But that’s a point of dip-shitention. Dominant was Pete Sampras’ tennis.

No. 1 is a big deal. Congrats to Nadal for getting there.

This legacy criterion has been a major foundational weakness for Djokovic, which I highlighted through-out my series of arguments surrounding Djokollapse. Early in the reading we pointed-out how his 2016 collapse, the effect that had on his ranking, his end-of-year ranking, his WTF results, etc., not to mention his USO result, was practically murderous for the guy’s legacy (the irony of that coming on the heels of his Novak Slam).

Much more can be hashed-out here.

The other question pulled from this week’s Mailbag is about the nature of discourse here at Mcshow Blog. Believe it or not, someone suggested that I might have been a little too curt in a recent exchange in the comments.

Ha ha. That’s silly. I argued earlier that we need to mix-it-up a bit more over here; but even if you saw said exchange, you would note that this was far from rude. In fact, given the reader/comment in question, he’s in a slump, has been on vacation and needs a little wake-up call anyways.

We’ll write more about Cincy tennis a bit later, as the boys roll into QF. Dimitrov did hold-off Delpo who appeared to be mounting a come-back in the second set, but lost his early break there and succumbed in straights. I mentioned yesterday actually that Delpo, despite beating Berdych, did not look that impressive. Dimitrov looked awful at the start of the second set, but gathered himself.

Dimitrov into the SF, perhaps a rematch with Nadal (backing-up their AO SF)?

Khachanov looked strong in his R16 first set TB 7-0 advantage, but then got sent packing 36 36 by the Japanese 28 year-old Sugita.