The youth has risen!

Timing is everything. The timing of Shapovalov’s upset of Nadal gets us deeper into this discussion of youth that I started a few days ago; glad I slid that under the door and into the press in the Nick of time. . . 😀

Indeed we have seen a bit of this youth’s gunfire in Montreal. How good, again, is the timing here? U.S. Open Series is well underway, and we have the Montreal business-end to digest along with Cincy on the immediate horizon. NYC is in the distance. . . can you see it?

Let’s skip through some highlights of a few matches that are helping to define Montreal, a potentially significant turning-point in competitive balance and hierarchy. Time will be the best judge on much of that, but shrewd analysis can help clarify and interpret the narrative.

Let’s start with Roger. I watched most of his first match v Polansky. He looked sloppy, bad at times and still breadsticked the local cuisine 2 and 1. He won one of his service games in less than a minute, literally :58 seconds it took to win a game. Looking at the scoreline, however, did not give one any indication that he may struggle a bit vs. Ferrer in his second match.

He looked old against Ferrer, who’s about equal in age to the Maestro. David hammered Federer’s second serve, kept the 2-seed off-balance, used his relentless defense to attack a seemingly tired Federer. As I said on Twitter, Federer looked hungover; he was sluggish and even grumpy, at one point smashing a ball deep into the stands upon missing a fairly routine overhead smash.

But he got his wits about him, held serve enough to win the second set and won going away in the third. Sure one sees him still a favorite to win this, especially given the draw, but he doesn’t seem overly eager, nor his tennis very urgent in advocating for the title.

In his pursuit of #1, I suppose we could be a little surprised by his lack of form here in Montreal; at the same time, though, with with Cincy, USO, fall hard courts, and WTF still on the schedule, there is plenty of time and opportunity.

Dear Jack Sock, I did not include you in my ATP Youth On the Rise article – and you’re only supporting this editorial move. At only 24, he should have, perhaps, been included along with the rest of the even younger American youth contingent; but he wasn’t. And his tennis (attitude) seems more in affiliation with the lost generation. We’ll see how the year transpires with him, but his D.C. result (granted, he did run into the hot Anderson there) and this loss to Ferrer has to sting.

The tennis of that next little bracket, of Nishikori, Monfils and RBA, has been quite dramatic. To be honest, I did not catch much of any of this; the tennis of Kei and Gael doesn’t quite secure my study (I probably shouldn’t admit that).

Monfils, of course, had one marathon win in him, overcoming Nishikori, but the gritty RBA out-lasted the quirky Frenchman yesterday, setting-up a potentially tight one against Federer today. The Spaniard could be empty from his tilt with Kei, but he usually gives the audience value and looking at Federer’s tennis at this point, today’s QF between Federer and RBA could be a decent contest.

Ahh, the Thiem v Schwartzman match. I saw the last part of this, when Dominic was serving for match at 5-4 in the third. To make a long story short, two things about these players reiterated their clarity: 1) Diego is a tough out, a feisty retriever and ball striker who can certainly go the distance with almost anyone, especially on clay; and 2) the clay game has some trouble on the harder, faster surfaces. Watching Thiem try to finish the Argentinian the other night was torturous. He couldn’t hit through the court, was rendered offensively almost impotent. This match with Schwartzman was like watching a match on clay. Long-winded rallies, players running out of patience, the survival of the fittest and the player with the biggest margin on his ground strokes. Not the most interesting kind of tennis unless you want to see players stagger to the ends of points, the business-end of the match looking more like a couple of buddies hitting in the desert, playing for a couple of cold beers.

Sorry about that – got away from me. Thiem needs more offense: memo to his coach and him. You are too good to only excel on clay. Looking at Shapovalov’s stroke, there’s no reason Thiem’s game, including the classic OHBH, can’t transfer. This loss was disappointing, mainly because he had the match on his racket, needed to end this affair, but couldn’t. . .as it kept on going, and going. . .and one could see the Austrian begin to wilt as much in confidence as in fatigue. Take care of that deficiency, Dom.

To Diego’s credit, in yesterday’s R16, he next went down a set to American NextGen Donaldson (whom I did include in that previous post) 0-6 before mustering his trademark grind to outlast Jared 7-5 7-5 in final two sets. Good for Schwartzman. And to be fair, he is only 24, so perhaps he’s merely getting back at me here, taking-out #BeliemInThiem and my fellow American youngster for good measure. You officially have our attention here in San Diego, Diego! 😉

Anderson clearly remains on the rise. He made the final last week in D.C., beating a string of tough opponents, and continues here in Montreal to feel confident on these hard courts. Disposing of Querrey yesterday was a good look from the S.African who now gets a rematch with Zverev. That could be a very competitive match.

Speaking of Zverev, good on him for taking care of Kyrgios in routine fashion, but it does look like the Aussie is hurting. The announcers spent as much time talking about the match as they did imploring Nick to get his shit together. This means the general maturity along with getting healthy, which is part of the preparation and professionalism that the best master in this brutal sport. Whether it’s throwing a match emotionally or never quite getting healthy to play 100%, the effort is wasted. That was the message from the call and from anyone continuing to watch this talented bloke come-up short.

Part of this conversation entailed the natural comparison to Zverev; not to jinx the German, but the point was made that he maintains his health. I mentioned in my previous post how serious he is, seemingly the most mature of the entire NextGen class. He’s winning more, more impressively and he’s even added more expertise to his box with the hiring of Juan Carlos Ferrero. Listen to Zverev speak (listen to his D.C. champion address from last week): maturity. Even his happy birthday wish to Federer was measured and echoed the maturity of which we speak (look at my twitter feed for that tweet containing the messages to Fed from several players).

How about that Zverev v Gasquet match? I suppose the signature point was a Gasquet MP that lasted 48 shots, won of course by the young German. The noted criticism of this rally and probably of the Frenchman, in general, is something we just mentioned with regards to Thiem: not enough risk or offense in his ball striking or point strategy.

Do we get a Federer v Zverev final? Something tells me no, based on the element of surprise that has grown legs and developed a mind of its own.

I mentioned in my Montreal preview that Raonic has struggled but I thought he might be one standing in Rafa’s way (the top draw has been more difficult than Federer’s half). So, Raonic does continue to struggle, not surprising from my end as I am not a fan of his tennis whatsoever and Shapavolav’s game reiterates this point which I will clarify in a moment.

I made a small mention that Mannarino has been playing well, going back to his finals appearance in Antalya, his R16 run at Wimbledon, and QF run at Los Cabos last week. He took care of Raonic and the tough NextGen Chung, both in straight sets. With the emotional high that Shapavolav hit last night, Mannarino could very well be the antidote that none of us wants, especially the young Canadian and his inspired local support.

Shapovalov’s win is certainly inspiring. We brought him up in our look at the youth, but we certainly didn’t predict anything from the outset. However, in yesterday’s comments, Clint and I went back-and-forth a bit about this guy’s moment of opportunity and his game in general.

To my point about Raonic (not a fan of that awkward stoicism – though it does speak pretty meaningfully to a professionalism that has seemed to have benefited the giant): this youngster has “panache.” This is important in the Canadian’s or any of these youth’s rise and separation from the pack. Denis let the crowd get involved; he encouraged it, along the lines with what a player like Nadal has done his entire career. Roanic, I doubt, would have done that. That’s just not Raonic and speaks to his quality.

We talked yesterday about how the crowd could be a factor in this match, but I did concede that I was hoping that the Canadian would simply “resist” the 1 seed. I followed this up with the point that Nadal, in my humble opinion, “is inherently vulnerable on anything but clay, but he’s riding pretty high right now, sure.”

You know from reading this blog that I have always been underwhelmed by Rafa’s overall game. Granted, he’s the clay GOAT. But that style of tennis isn’t as potent on the other surfaces, especially HC (grass was slowed significantly since ~1997). No, I did not envision Shapovalov’s upset of Nadal. But I am not as stunned as someone like Ben Rothenberg.

Look at how far back Nadal is in this match last night. That defensive posture, massive top-spin and a less than lethal serve puts the opponent in play, often. 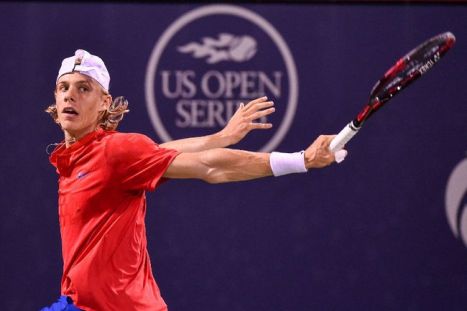 But let’s be clear: Nadal’s opponent last night has massive offense (see discussion of Thiem above). The tennis of Denis is offensive, has flair and the guy can not only handle the big moment, but he might seek it (similar in character to Zverev). This is the separation, what we can look for in these youngsters to determine the contenders from the pretenders.

For instance, what happened to Dimitrov in that third set vs Haase? Sure, the game is tricky and anything can happen in a match (and Haase is playing well), but my point is that for some of these guys trying to find room at the top as a the Big 3 (or 5) continue to graze glutinously, they need to be there mentally as much as physically. Sure, stating the obvious here, but that’s what last night’s match might have clarified more than anything else.

The tennis from Denis Shapovalov or any top-of-the-tour contender must evidence championship character (panache/flair/guts) and have enough offensive skill to finish the kill.

I won’t say he must, as well, have a one-handed BH, but this doesn’t hurt 😀

Indeed, brilliant stuff from a teenager who’s moving the needle.

2 thoughts on “Montreal Masters at the QF”