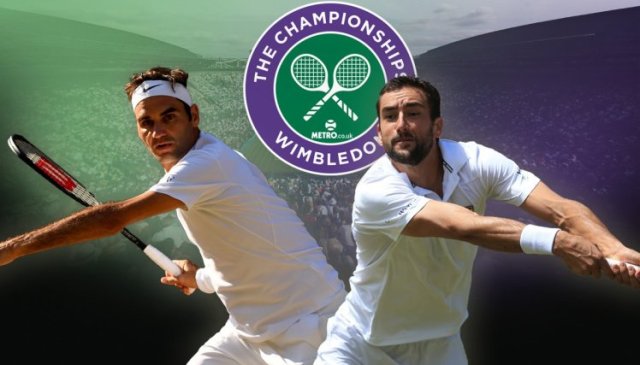 The only tennis I missed this morning was the first set TB of Cilic v Querrey and the third and final set of Federer v Berdych. I replayed the final frame of Fedych and learned via news source that Cilic let slip a 4-1 lead in that first set TB. His ability to regroup and take care of business is pretty telling of the danger and focus we’ve been talking about for a month or so with the 6’6″ Croatian star.

I’m up-to-speed on all of the tennis today in those big semi-final matches. The final booking is a pretty predictable outcome given these players’ overall games at this point.

Sure, toward the end of the first week, having seen glimpses of play and score-lines (and picking-up that macro-narrative I like to wrestle with), I imagined a Nadal v Djokovicf inal in that the Spaniard appeared (at first grasp) to be still riding that annihilative tennis and Novak, my lord, had to, at some point, resurrect himself, and become even more motivated by the opportunity to rain on Federer’s parade.

But Cilic has played stand-out tennis and Federer is probably the grass GOAT, not to mention it’s #2017Federer, so what else should we expect. Indeed, this is an almost logical final here at the Championships.

Keep in mind, those of you who have read this blog for a few years, I have had some pretty harsh words for Cilic, whose 2014 run in NYC still seems almost corrupt. His ability to win Cincinnati in 2016 and reach the QF (again) at WB last year and the F this year only help his case; however, watching him through most of 2015-16 play very ordinary (or sub-ord.) just made that 2014 run terribly unfortunate. To think both Federer and Djokovic could lose those SF matches against perennial misfits was tennis hell.

Good on Cilic for backing-up his one major.

The Querrey v Cilic match went pretty much according to form. I crawled out of bed seeing that Querrey had won a first set TB. Could it be? But once I got myself in-front of the tele, the story-line we’d predicted started to materialize. There was a moment in that third set TB where I could’ve seen Sam snap control at 3-3, get a mini break there and serve-it-out, but the Croatian was very very determined. Marin’s emotional energy remained positive and urgent – losing last year to Fed where he held a MP and a 2-0 set advantage, and losing in the Queen’s final this year both seem to define some of his facial expressions today – he was not going to lose. This was the body language and the tennis for most of the match; I say “most” because Sam played well, made Cilic play at a high level to secure the four-set victory.

But mentality almost trumps the actual tennis. What belief do you think Sam actually had that he could make the WB final? The telecast showed a pre-SF interview with Sam who talked about his confidence, beating Novak and making the QF last year, how that experience helped fuel this year’s run. When asked about his chances in today’s match or in the final four, he said something along the lines of “I hope to do a little better than last year.” The part I got right in that paraphrase is “a little better.”

I am not suggesting that his relaxed demeanor on court necessarily informed the outcome here; Cilic is rolling, of course. But opposite Cilic was a guy playing great tennis, on a really memorable run here at SW19, but in the end not in possession of the confidence players need at this end of the draw. I am proud of my American brother, but I think it’s safe to say that he would have a very tough time closing-out the uber-motivated Cilic who has SO MANY REASONS to want this finals appearance at Wimbledon.

Sam unable to hold that break in the third was tough to see; Marin put much more pressure on the American’s serve whereas Cilic had several love holds on his serve (had a much easier time most of the match). The writing was on the wall throughout, but still Querrey made a solid appearance; we should see more of this cool customer’s tennis in other big matches in the future.

Not sure how Berdych feels here. Probably worse since he’s been here before, has had more success on tour than Querrey. At the same time, the Czech beast played some good tennis and certainly had Federer looking pretty weary in that second set.

Berdych’s ROS troubled Federer at times. Of course, if the ball to Tomas stayed up at all, he was able to punish Federer. Federer did have BP opportunities (the first set could have been much less dramatic had Federer cashed one or two of those BPs), but Berdych also held his own. On a few of those BP, Berdych answered with an ace. The tennis was tight throughout.

No doubt we observed a slightly tighter Federer, his FH errant, his BPs uneaten, his timely dreamy drop-shots missing wildly. . .he just wasn’t as dialed-in. I haven’t seen the numbers (serve, winners/UE, etc.) but the eye-test was very telling. Berdych played well, and Federer just wasn’t as sharp as he’s been.

Yet he still won in straight sets. Of course, what most will say here is that if one of those two TBs goes the other way, we have a different match – Berdych has more belief, Federer sees the wheels coming-off (when Tomas broke back in the first set, he was dictating, had Federer looking a little unsure of himself).

In both TBs, Federer took control and managed to maintain that valuable distance between him and a potentially dangerous 4-5 setter with Big Berd.

Initial thoughts on the final

My initial thought is Federer will be up against a very determined, motivated and dangerous tennis player. The fierce yet positive emotional energy from Cilic only adds to his big serve, good footwork and threatening BL arsenal (his FH and BH were big and solid v Querrey). All four of these players today can come to net; Cilic shows he can finish there, quite well.

The previous point about ROS strength still stands, but Cilic handled Sam’s big gun today and Berdych put some pressure on Roger’s serve, as well. The idea that Roger has the best ROS has some merit, but it’s not going to be that simple. In the TBs, Federer’s level/concentration/etc. rose and that was the difference. Berdych also gifted Federer some pretty meaningful points on that FH. Not sure Roger wants to wait until the TB to outshine Cilic. Berdych certainly looked like the bright lights of that sudden-death tennis got to him. He was toe-toe with the Maestro, but for the TB tennis.

Obviously, that 90%+ first serve win factor for Federer is huge. He should have been able to serve-out the first set, winning his serve easily up until that game at 4-3.

It’s pretty much cliché time in the commentary because it’s one match to rule them all. 😀

We’ve been talking about the Cilic danger for so long now (read my preview, even my grass tune-up commentary where I said where he lands in the draw is critical. When the draw came-out, I was quick to say Nadal had the toughest bracket because of the Croatian, certainly, along with that other grass master – Muller), I wouldn’t be surprised at all if Cilic finds that rampant form, which we saw a bit today, and over-powers Federer. His youth and power (and experience) are big factors. Both Federer and Cilic know this.

At the same time, we tend to think that if Federer finds that almost unplayable form (FH and BH murderous, solid ROS and 90%+ first serve) that he’ll straight-set Cilic.

I’m going to close today on a nod to the coaching. This, imho, is a critical factor in these tournaments. Think of the effect of Lendl on Murray’s game (when the Scot is healthy). I have no doubt that Goran Ivanišević has added strength and character to Berdych’s tennis in 2017. No doubt. What about Novak’s coaching situation; that sure seems like a complicated arrangement – did Andre know the Serb was injured? Did an injury-laden year warrant cleaning-house on his box? No doubt, the Serb’s coaching situation reflects his personal and professional health.

And then there’s Marin and Roger. Jonas Bjorkman is a grass court mastermind; he has three WB doubles titles. Cilic’s success in 2016-17 has to be partly a result of this relationship. Bjorkman was instrumental with Murray’s success and now he has Cilic playing very well on these London lawns.

Likewise, Federer’s new coaching arrangement (as of the end of 2015/beginning of 2016) has been, I have argued at length, critical to his newfound brilliance.

That’s where we are now: behind closed doors, some final words of advice to these men’s finalists at Wimbledon 2017. Listen, you can hear the coaches now . . .

What are Bjorkman and Ljubičić telling their respective charges?

Remember my “pep talk” to Roger before USO 2015? He wasn’t listening.