To continue the thread from my previous post, Nadal has to be considered a favorite for The Championships. His form is too high and devastating to not be considered transferable to another surface, such as the homogenized grass, especially in the slower conditions during the first week or so. If one wants to certify the tennis we saw last week, especially in the final four, then one has to argue that such massive dominance can translate to the grass.

We should use the 2008 model – where he didn’t drop a set in Paris (destroyed the field, including Federer in the final) and then went on to beat Federer in the Wimbledon final, as we all know. Nadal had similar outcomes in 2010: didn’t drop a set in Paris and followed that with a championship at Wimbledon (Federer was spared in these two finals). 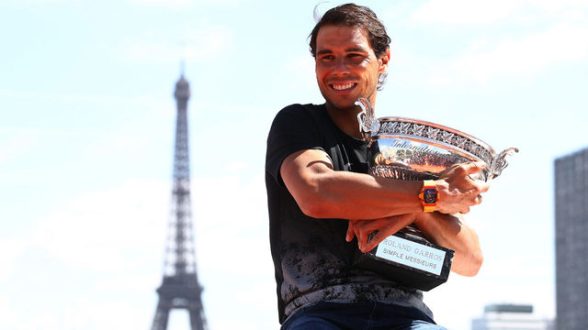 The point is: this past week we saw a virtuoso performance, again, by the clay great. With my own eyes I saw an unplayable tennis of incredible strength and quickness with violent depth and accuracy to go along with his almost unrivaled tennis nous. What wasn’t working for the Spaniard?

To then offer some sort of excuse that the clay and grass are so different and therefore he could struggle undermines Nadal, fatally. This is not the hard and fast grass of the 90’s. The court homogenization has created the kind of tennis circumstances to cater to the baseline grinder like Nadal and Djokovic.

And, again, that kind of dominance on clay not only has transferred to grass, but it had better, in order to consolidate that kind of run with that kind of all-time, almost cartoon-like dominant form.

Many of you know that I write from my gut. I warned of the Djokollapse extending through to the 2017 French and beyond back in September; I called bullshit on Djokovic’s Rome SF master class, among other reads (in 2015, to be fair, I argued Nadal had shrunk and disappeared like the threat of his ground strokes).

When Federer announced he was skipping RG (following his early clay abstinence), I thought “this isn’t good.” All I could use to rationalize the decision was his injury (he must not be 100%) and a bit of history (skipping the French to prepare for WB has been done many times by tennis greats). I discussed these propositions in a few posts. The only problem with this latter reason is this is a different tour, a different brand of tennis and these guys, especially Federer, don’t skip majors. Using this historical rationale is a stretch, a camouflage covering perhaps a more meaningful and accurate logic. My initial thought was he’s essentially preparing for retirement, wanting to give WB and the USO two final runs in the best possible condition he can manage at 35, turning 36 in September.

You’re telling me he’s going to play clay and RG next year, at 36 going on 37? He’ll be stronger next year? That’s practically an insult to our intelligence.

That means the decision had to be in consideration of his injury, his preservation.

And/or Ljubičić sat him down and told him, “No,” which turned-out to be a smart move perhaps.

Wilander even says as much in an article on Tennis.com: “[Nadal] has taken confidence away from [Stan] Wawrinka, from [Andy] Murray, even though he didn’t play him. And Roger Federer is a very happy man that he didn’t come to the French, because his confidence has not been dented.”

I’ve talked about that strategy already, completing Ljubičić‘s thought-experiment on Federer’s career and rivalry with Nadal: if Federer had skipped more clay in the past, his H2H with Nadal and probably his tennis in general post-French Open and over-all would have resonated more confidence.

Either way, here we are:

“A rejuvenated Roger Federer is committing to a full schedule in the second half of the season, saying that he’s had enough of practice and is hoping to quickly recapture his stunning early-season form. Fresh off a two-month break to rest his 35-year-old body, Federer returns to the ATP World Tour this week at the grass-court MercedesCup in Stuttgart.

‘There are no more breaks now,’ Federer told ATPWorldTour.com Monday. ‘I’ve had enough breaks. I’m a practice world champion now and that’s not who I want to be. I want to be a champ on the match courts. So I’m going to be playing a regular schedule for the second part of the season… And this is the beginning here at the MercedesCup in Stuttgart.'”

You don’t say; you’re done with “breaks” now? You missed a shit ton of tennis, Roger. No shit you’re done with breaks. This statement is troubling if you ask me. He seems to have come to the realization, especially after last week’s macabre tennis theater, that the situation has gotten a little more intense, a little more apprehensive.

Granted, he came off an eight month break last year only to win Melbourne. Certainly, this smaller two month break can result in a quick return to that kind of form, only he’s even more refreshed, right? Sounds perfect!

I’ll believe it when I see it.

The build-up to SW19 is short. Nadal is taking this week off but will be back in action in London next week at the Aegon International.

The Championships begin a week after that.

My eyes will be tuned to these next couple of weeks, to the form these two greats manifest for the All England Lawn Tennis Club.

Federer has some interesting competition at the Mercedes Cup this week with the likes of his buddy Haas in his opening match, followed by some S&V with M.Zverev, perhaps Berdych, Pouille and if we’re lucky a final vs. baby Fed.

Indeed, the clay interrupted some interesting tennis from some interesting players; hopefully we can see these gents find enough rhythm and confidence to prepare for some big results on the grass.

Nadal only has to maintain that fire-breathing form of his. Again, who would bet against that kind of relentless, rampant form at this point? Borg, Nadal and Federer have all completed the FO/WB double. When was the last time you saw Nadal so ruthless? He has to consolidate that, or he’ll continue to be plagued as a virtual one-trick pony.

To counter my impression, hell, back to Wilander at Tennis.com:

Still, Wilander believes that, the way he’s playing, Nadal has the ability to hold all four majors, just as Novak Djokovic did this past year.

‘Rafa could arrive here next year, in May, with 18 [majors],’ the Hall of Famer told the news agency.”

Perhaps a bit hyperbolic, but in defense of the Swede’s Nadal-hype, this is what I am actually talking about.

In the aftermath of the French Open 2017, concerning Nadal’s incredible tennis exhibition, one has to either buy-in and sound like an idiot (or genius, Mr. Wilander), or almost call into question this kind of level, so insanely dominant that it renders the tournament irrelevant, the draw practically meaningless and the tennis likely unsustainable (what was that about the highest level of tennis ever played?).

If Nadal crumbles on the slowed grass and can’t consolidate Paris, we have more questions. That kind of dominance should transfer; a non-transfer brings into question the player (inferiority) and continue our denigration of the clay. We are beyond the days of Costa, Ferrero, or Gaudio winning the French in the days of clay specialization. We got a once-in-a-generation player who can dominate that surface, as well as achieve huge results on other surfaces, in other majors (allegedly due to the fact that those surfaces have been slowed). Is he different, a more complete player, or is he a manic dirt baller whose form contradicts the tennis imagination?

As we slowly tip-toe to the end here of this exploration and really come to the question of style sustainability (that’s really what this is all about, folks; can Nadal sustain this? And I’m saying he better), we reach a philosophical intersection.

I am reminded of the way Sampras approached tennis as a junior when he was figuring-out his game, switching from a two-handed BH to the one-hander, watching his results reflect this change, short-term, but knowing he would benefit in the long-run, trusting his mentors. He clarifies: “To us, it was always about playing the right way, trying to develop a game that would hold up throughout my career. It was a calculated risk [. . .] On the other hand, some of those juniors were like starving guys, eating everything on the table while the eating was good. They didn’t think long term, they lived and died by their daily results. . .” (A Champion’s Mind).

Consistency is the quintessential element of class and greatness.

You know me: these two posts (Aftermath Parts 1 and 2) are explorations of this brilliant and unplayable and awkward and disturbing tennis that Nadal delivered at Roland Garros. It was humbling and unappetizing, if that makes sense (and I will continue to make sense of all of this).

This Nadal puzzle has been missing pieces for almost a decade; we’ll call the puzzle la década del misterio.

This grass season we’re stepping into will answer, for me, many questions concerning 2017 Fedal and other players, of course (are you awake Kyrgios?).  My tennis calculus and calibrations will be working overtime to locate these missing pieces.

I say Nadal’s form has to carry him to Wimbledon as a tournament favorite. The eyes don’t lie; that transcends clay (it’s more Borg or Federer or Djokovic than it is Gaudio, et al.)

Who else you got at Wimbledon? Raonic? Djokovic? If you said Murray, I agree with you; he found his game in Paris, along with some confidence, missed facing the wood-chipper in the final, will be the homeboy in-front of

his home-crowd and he’s the defending champ. Good call. Of course, with Nadal #2 in the world now, he won’t have to see Murray until the final.

Federer? He has some quick make-up work to do and I still think he rolled-the-dice on skipping all of that tennis, while his rival found the fountain of youth and some Parisian absinthe that empowered him to La Decima and could inspire him to become, perhaps, the werewolf of London.