Greetings, my tennis fiends (Not a typo. Indeed, you are my “friends,” but with the French underway, and the sport’s history on the men’s side embellishing our dangerous tennis drunkenness: you and I are no better than fiends of this ghostly tale of legends and champions).

Having opened with that. . .

nothing too interesting to speak of on the court in Paris other than clay remains the main character in most of these matches; in other words, generally, among the 80-90% of the field, the result is a coin-flip. But that’s just clay for you.

Or we hear the collective character of a country come into play to explain a result, as we’ve heard many fans say this or that about the French on many occasions, getting down and not having the heart to fight. Does this explain my failure of highlighting the chances of one Jo-Willy Tsonga, who got embarrassed by a complete unknown in R1?

I have already written that post: What Could Have Been

But Tsonga is pretty much past the point of no return now. I was making more of a comment about the wide-open top half of Roland Garros.

The Del Potro match, if both survive to the R16 (even though Juan is less than 100%) will be a good gut-check for Murray since we know the Argentinian will fight with whatever weaponry he has. But don’t hold your breath, or breathe too deeply the cloud of dirt kicked into your face by some “unforeseen” result.

Again, nothing too much to speak of so far (too bad Sock has gone away, great emotional win from Stevie Johnson – a little nod to my fellow Americans).

I see Novak and Rafa have been fairly clean through these first two rounds, though the commentary seems to suggest that Novak’s two straight-set victories have not been without a little nervy and clumsy close-outs (I have watched highlights. Nothing too remarkable here). I’m not buying any of this concern, yet. I’m of the opinion that Novak is getting a lot of lift from the presence of Agassi.

Do you want to really know what Agassi brings to this story? This video is a good example:

Interesting juxtaposition between the two coaches sandwiching Novak in this tennis time and place.

I said this before: Agassi often assumed the role as the less gifted athlete, but he had the fight of a cornered cat, a champion cornered cat. He’s smart, competitive and, as many have noted, complicated in a way that makes his approach to tennis more than just the ROS, taking the ball on the rise, etc. Agassi has had to come-up with those intangibles to beat many bigger and more gifted tennis players.

He’s the classic underdog in a way, which is ironic since he’s held the top spot of the sport for stretches of h 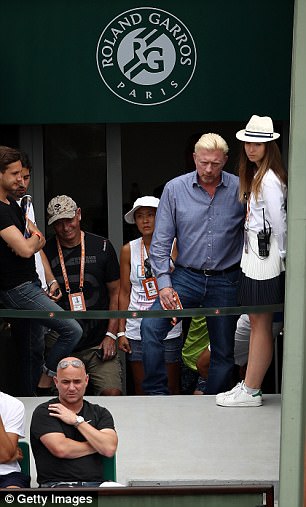 Sounds a bit like Novak. Novak has been a monster in this sport for years, dominant, pretty consistent, etc.  Yet he’s seen by many as a kind of underdog. Is it Fedal? Is it his and his family’s sometimes acerbic antics that have caused tennis fans to recoil, refer to them as classless, etc.?

Agassi has this gene, as well. We all recall his exhibition match against Pete (Rafa and Roger were on the court, as well) when he made reference, into the microphone that projected the comment to the hundreds and thousands listening, to Pete’s extreme frugality. Certainly caught Pete off-guard and made everyone, including Fedal, a bit awkward.

That’s where this Agassi and Djokovic relationship is really interesting. They’ve played the underdog (in an ironic way) throughout their careers and perhaps because of this slight, this under-appreciation, they’ve acted-out in ways that have often invigorated this role.

But they’re both smart. This we know. The video above is a good example of the tennis intelligence that precedes the American.

By the way, this is just another reminder of the intelligence of that earlier era of tennis. Look at the impact that Norman (who’s a little younger, of course), Lendl, and Becker have had on this era.

Again, the presentism of fangirls and boys is a terrible look deep in the heart of tennis literacy. Those old boys from back in the day would’ve eaten quite well in this day and age of super tennis.

The tennis should pick-up in Paris over the next few days. In that bottom half, Djokovic will get the tough but diminutive Diego Schwartzman, who loves the clay, then turn his attention to Pouille/Ramos-Vinolas, all of which sets-up the big QF that we assume is a winner of Goffin v Thiem. Having said that, Thiem has an emotional (and potentially inspired) Johnson, grieving the recent loss of his father; and Goffin has the awkward but dangerous Zaballos.

Definitely better clay foes on the rise in the Djokovic bracket. The writing here at Mcshow Tennis will certainly pick-up as the draw tightens.

Nadal, as we said in our short preview, has a pretty straight shot to the SF. I am not as confident as many about Rafa’s chances to win RG, but he should not see too much trouble until the potential epic we could see in that SF.

I am happy to see Dimitrov advancing and another Nadal v Dimitrov could be an interesting match, but, again, this is Nadal’s quarter all the way.

In the top half, it seems wide-open. No one stands-out at this point. A lot of you like Stan, but that’s fools gold until very late in the draw. Literally, there are too many names to sift through at this point.

I am quite intrigued, as you might have guessed, with the arrival of Andre. He has always been a complicated tennis entity. From his relationship with his father, to his quirky style, his win at WB, his career grand slam, and continued battles with one of the GOATS (who pretty much owned Andre) to this now savior status in the Djokovic box.

Even if Andre’s presence in Paris is limited, his affect on Novak, imho, could be ingenious. We shall see.

Looking forward to the next couple of days. Stay-tuned.

10 thoughts on “Developing Story at the French: Djokassi”