This is already a crazy year of tennis with 2017 Fedal taking aim at whatever Djokeray had planned for this new year of our Lord. If Nadal wins the French that begins this Sunday, then the shit has officially hit the fan. Really, if anyone other than Murkovic wins the FO, the Kingdom will have officially been ransacked and left for (near) dead.

I think Djokovic will redeem himself, perhaps even play with real purpose, renewed passion and focus at RG 2017. Agassi is an engaging guy, a great tennis mind and one hell of a fighter, so he should be able to give Djokovic a real boost in tennis motivation and its related execution.

Agassi fought and won many battles against seemingly more athletically gifted players. Though as talented as many of his peers, he often seemingly played the underdog role;

he dominated stretches of his career, beat guys like McEnroe, Becker and Sampras enough to enter the great pantheon of the sport. But most of us in our mind’s eye probably see him standing next to Pete, holding the runner-up trophy, definitively subordinate to Pete’s indomitable rule of that particular era.

Djokovic finds himself in a similar predicament, playing the underdog, looking up, despite whatever his gang of fans want to proclaim.

The Djokovic support groups (NoleFam, FanGirls, FanBoys, BlogBags, et al.) have taken this particular period of the Serb’s career to really bolster their cause of elevating him above the rest of tennis history. From sound bites, to saber metrics, the congregation has upped the ante of their idolatry by solidifying their position that Nole rules them all despite the fact that he’s in the midst of a mid-life crisis.

I have to hand it to them: there is no better way to show one’s support than to bleed the fanatic’s blood in the face of seeming decline.

The Serb himself told CNN recently, published in an article yesterday: “I am experiencing a little bit of a crisis, if you want to call it that” (CNN).

Sorry: here I go again. I called crisis after his U.S. Open loss through which he had the easiest draw since my kid’s 3rd grade two-square tournament at recess. He looked beaten, utterly weathered and at wit’s end despite getting 2-3 W/O, a match retirement or two and then having the honor of facing a disgraceful Monfils in a major SF. He was sacked by the Stanimal decisively in the final. The decline continued through to the WTF where he lost to Murray, lost his #1 ranking and any and all control of his ATP stewardship.

Djokovic hasn’t been his dominant ’15-’16 self since about a year ago (my team of forensic anthropologists have traced the emergency back to the finals of the 2016 FO). His Dubai title in January was misread; his 2R collapse in Melbourne was pretty predictable, etc., etc.

The mob cried rigged draws (Acapulco and IW) when all along he was struggling and actually running into a surging Kyrgios.

The mob began picking-up steam with efforts from Twitterland from a big FanGirl whose statistical analysis declared Novak the best because he has faced tougher draws at Masters and Majors than Fedal, and that the French draws through the years have been rigged against Nole. Another marvel of professionalism declared Djokovic the best all-around player based on his accomplishments across the different surfaces. There are more of these sorts of statistical renderings aimed at elevating Djokovic, whose career, imho, does not need such dramatic and practically contrived research to justify his legacy. Just recently there appeared another “argument” that at 30 years of age, Novak appears, based on some numbers scratched-out on a napkin, to be the GOAT. 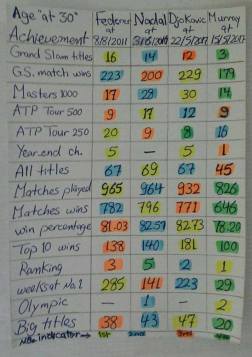 Needlesstosay, this lacks all kinds of historical perspective and context. Indeed, this is presentism running around with his head cut off.

So, I have to ask you as I’ve asked myself: why this surge of “evidence” to support Djokovic’s GOAT candidacy in the face of a year-long slump?  I guess the logic is right there, as a kind of defense mechanism. What better time to support and celebrate someone than when he’she is down.

The timing is interesting and I will still ask why such an effort is being made by, practically, an entire community?

With a player of Djokovic’s magnitude experiencing a slump like this, still relatively young at 30, why not wait patiently for him to return to form? This return could, believe it or not, be as soon as next week when the balls are tossed at RG.

Let me give you my answer to this question of timing.

First, Novak is not “only 30,” “which is the new 25,” something I’ve heard the likes of Brad Gilbert proclaim. We’ve all gone over this before: even if for the first time in ATP history the top-5 are all over 30, or that 30+ year-olds have won the last two majors (Stan and Roger) and that more and more 30+ are playing with viability (F. Lopez, Karlovich, et al.), this age is still a harbinger of decline. Agassi himself seems to have had this late, post 30 run at the majors, but he only won 2 after he turned 30 (which is incredible, actually).

And Wawrinka is a total outlier. He, I would argue, is “younger” (even at 32) than Novak. Novak has massive mileage to contend with. There’s a price to pay for winning 30 Masters titles. He’s been to a lot of Major finals, as well.

His mob is clamoring for acceptance (more so than transcendence, I would contend – they have to know their argument is pretty flawed given some obvious number disparities) because they sense something. They sense a couple of things.

FanGirls and Boys sense there’s an incredible exchange occurring in men’s tennis, as we speak. This has been Novak’s time to shine, since 2015 – the latest Novak peak. Roger is mid 30s and Rafa has been succumbing to his own mile(age). Fedal has been shrinking in Novak’s rear-view mirror the last couple of seasons, presumably getting even smaller as the clock has continued to tick and the calendar talk.

Then came Djokollapse at the mid-point to end of 2016.

Then came 2017. Here we are in what should be the midst of Novak defining his legacy, chasing Nadal and Pete at 14, Roger at (then) 17. Sure, Novak slumped following his personal calendar-type slam, but he’d recover even though Murray had brilliantly taken advantage of this seemingly small window of opportunity.

Melbourne turned into Fedal XXXV. Federer’s win there shook the tennis planet. He won #18, he beat Nadal, he’s 35 years-old, he then won the sunshine double (don’t even need to mention he beat Nadal twice in those title runs). Federer eclipsed 2017.

Then Nadal returned (having already made his mark on the difficult early hard courts) to his dominant clay form.

Here we are on the verge of Roland Garros, Nadal trying to win La Decima, looking as confident as he can at close to 31.

Three weeks after the FO, Federer, if healthy of course, will be waiting at The Championships for his scheduled run for that esteemed crown, an unprecedented #8 and #19. He’s even skipped RG (let Nadal handle that battlefront) to preserve his energies, and await that highly anticipated and prestigious (grass) turf war.

Then the boys are onto the quicker hard courts, destined for NYC.

Re-enter Novak Djokovic. Do you see what’s at stake here? Novak is playing not only for his 2017 form, to maintain his place in the top 2 or 3; he’s battling history here, literally, a resurgent Fedal, who’s legacies Novak, whether he wants to or not, continues to battle in hand-to-hand combat.

The FanClub’s persistence is quite telling of this tennis world war. If Nadal wins the FO with Federer lying in wait at Wimbledon, the crisis will only intensify.

What about Murray, Wawrinka (who looks to be finding a little more form in his defense of Geneva this week), Zverev, Thiem, Kyrgios (whose reaction to Zverev’s win was quite favorable), Sock, and Tsonga, et al.?

Just to clarify: there is panic in the Paris spring air.

As far as I’m concerned, the mob should wait. Be patient. These Twitter and Facebook arguments are trying too hard; most sensible tennis intelligentsia knows better. And most of us are too impressed with Agassi (at least as a tennis player) not to think that Novak does respond positively to this coaching and mentoring.

I forbid myself to entertain the predicament of the Djoker if he continues to lose ground in Paris. The road to tennis glory only gets steeper after that.

PS
This is a short but interesting article providing some context to the hiring of Agassi.