The SF and F matches went pretty much according to form. Though Cuevas played well, knocking-off Zverev in the QF (playing well of late, generally), we figured the future of clay would advance. Though a lot of people are critical of Thiem’s scheduling, he’s been learning how to win for a few years now, so these deep runs are becoming more and more common place. He belongs. He’s podium material.

I only saw highlights of the Nadal v Djokovic SF. My own scheduling got in the way here. However, his tennis is not “moving” me; I’m not really looking for a Djokovic match these days.

What I tell people often, who are trying to reach an audience: if you don’t feel it, nor will your audience. Djokovic is only going through the motions. But we knew this going in. Those who think Djokovic made things difficult for the Spaniard to close. . . come on.

I don’t trust Djokovic right now because I don’t trust him under pressure. He had nothing to lose down a set (2-6) and looking at the shower and an early flight to Rome. He has to play well to see adversity. He isn’t playing well enough to see any real drama in a match. Nishikori went running (Djokovic needed that match), so he had, really, no chance in the SF. Djokovic is all smiles. We need the madman.

Thiem, on the other hand, played brilliant today. How about some progress on a week-by-week basis? Last week, he crumbles at 4-5 in the first and the match is gone. Today, he’s at 4-5, down 0-40 to Nadal – three set points!

The Austrian fights back to even it at 5-5. The TB is even better. Nadal saw a total of 5 SPs before finally closing. The Dom is pop corn pop-star stuff. He got another clinic from the master today, but showed much improvement. The TB got to 5-3 Nadal, looking pretty grim for Thiem, but he fought that off, got it to 5-5. Just brilliant stuff from both players.

The actual tennis analysis takes us straight to, as I said in my last post, court positioning and ball depth. Thiem likes to play from the men’s locker room, scorching one-handers and his big (fallible) FH like a street-fighter from about 100 feet behind the BL. He actually got more offensive today, moved in, enabling him to engage his BH ea 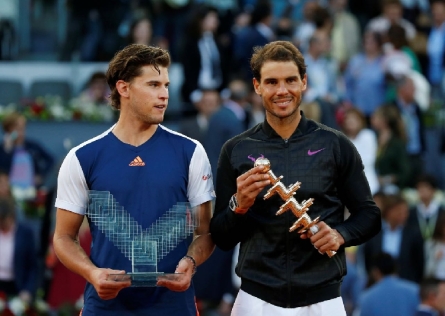 rlier (ala Federer) and pin Rafa a bit to his own BH. That’s how these guys try to escape Nadal attacking their one-hander: feed his BH. Thiem went toe-to-toe with the clay GOAT today. Much growth in the young man. Back-to-back finals on the red clay vs. El Rey de la Decima (sure Madrid wasn’t a 10 spot, but you know what I’m talking about).

Of course, kudos to Nadal. What a throw back. Watching Thiem and him battle today was a bit of that Federer v Nadal of old – work with me here. Thiem has a bit of that raw offensive big serve/first strike/one-hander attack to counter-balance the soccer mid-fielder’s strength and athletic pitch mastery of Nadal. One of the biggest take-aways from this month-long clay master-class from Rafa is his court fluency, how to read and execute the drop shot, or the nasty BH, running around that short ball to end the point on his inside-out FH. He’s the chess master. Have always been perplexed by the fact that I truly believe clay is a less sophisticated surface and game, yet the king of clay is perhaps the smartest guy out there in shorts and tennis shoes. Bravo. Much respect to Rafa.

We’ve been relishing this 2017 Fedal phenomenon since January. What a remarkable season thus far. As if we’re in a time machine. I said something to the extent of how ironic: Fedal is on top of the sport and there is no sign of the Djokovic-Vajda project. As Djokovic bid his ~10 year-old box good-bye, Roger and Rafa are destroying the tour. Flash-back to 2007, right?

Or is this more like 2012? What’s the connection? Well, Rafa did win FO and Roger did win WB, but the bigger deal was the massive drop in form (relatively speaking) from Djokovic. 2011 many will argue was peak Novak, where he blitzed the ATP for three majors and numerous other titles. The following year, however, other than the AO (which he wins almost every year), he went away. That appears to be the case this year, following his incredible ’15-’16 run. In fact, even 2013 was pretty rough by Novak’s standards.

What explains these giant peaks and valleys of the Serb’s dominance? In other words, we’ve been here before: not only with Fedal taking hold of the men’s game, but with Djokovic almost vanishing. If you think about it, sounds pretty natural: sustained dominance is difficult.

Here are some videos of Madrid 2009. Nadal had the epic SF with Djokovic, which he survives, of course. Federer pretty much routines Nadal in the final 4 and 4. Look at the S&V Federer employs on MANY points. If he’s serving, he’s coming in. Brilliant stuff on the clay. Sure Nadal passes, but that’s pretty relentless stuff from the Swiss.

Thiem doesn’t have the S&V of Federer, but you saw him use it a bit today, which was pretty effective. Watch the Fed/Nadal highlights. Some of the S&V is all-time. Federer goes on to win Roland Garros that year (The Djokers say but he didn’t have to face Nadal. When Djoker won RG, he didn’t either). Compare Thiem today to Federer. Certainly different, but glimpses and he’s going nose-to-nose (new body part) with Rafael.

Lastly, I did want to get another shot off at Nishikori:

Asked what are his plans now, Nishikori replied: ‘I’ll take couple days off, for sure. I will plan to play Rome, but we’ll see. I cannot promise to play or pull out right now. I feel a chance, you know. I just need couple days, I guess, to recover well. But French is more important. We’ll see next couple days.’

‘It was inflammation‘, Nishikori explained furthermore. ‘Now I think it’s getting better. It was my first tournament. So, you know, I was feeling a lot of little bit issue everywhere. I think that’s little bit causing to get little bit of pain. But I was expecting to have some pain. I tried to get used to little bit of pain. Yeah, hope I can get better.’

Novak has Nishikori again in his Rome quarter. There are a few other interesting names in that quarter that the Djokerfans might not approve of. Yawn.

Nadal has Thiem in his quater. Really? That’s the best you can do, Rome? A Nadal v Thiem QF?

Wawrinka and Cilic have their own little irrelevant quarter.

Then the Murray/Raonic party in the top quarter. Does he even beat Fognini in his first match?

More to come as this plays-out.

I’m in tennis watching and writing mode so stay-tuned and feel free to chime-in. Interesting stuff for sure.