Above was literally the title a few days ago where I just wanted to comment on those two matches and a few other things, but never quite got there: but that’s where I was going – to analyze some of this dirty tennis happening in Spain. Madrid.

I had this video all lined-up, thought it told much of the story right now concerning Djokovic; it actually does clarify the general result of whatever is causing this slumpy tennis.

The idea was scroll to 8:40 on the replay. This is where we’re at 4-5 in the second set, Djokovic serving. Almagro gets a look at two BPs. The shortness of Almagro’s shots in this particular game, with the Spaniard about to break and take the set, goes unpunished from Djokovic. Sure it’s clay, but the Serb should have dealt with these shots given his “potential” (at this point), make his opponent pay for this.

The depth of shot is about all you have to look at in these matches, court positioning too, of course. When Nadal is short, he’s even getting beat, but his opponent has to play almost perfect clay tennis to beat Rafa at this point. At least this one axiom is still in play, even in the tennis sandbox that is clay (ha, you all must love my 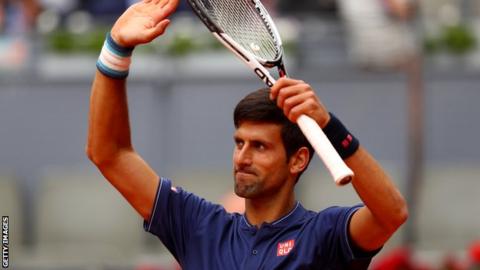 commentary of the European dirt): “If you’re short, you’re dead.”

That particular stage of the match (4-5 in the 3rd) is interesting because it’s showing the converse of this axiom: “If you don’t destroy shorty, you’re clowning at the top.”

There, get some t-shirts made, put the text in quotes and give me credit – part of my branding strategy.

Djokovic lacks a spark right now that kills the threat of his game. He actually plays pretty well against Almagro and then the match with F. Lopez had some insightful evidence, as well. I think Novak looks generally good on the court and improving (though I need to finish that thought). He’s hitting the ball effectively, serve is improving and there’s a certain lightness in his play, not brooding, being more creative, even on the clay.

I see improvement; however, he has to pass a big test. Nishikori today might have been, but I really don’t trust anything about the Japenese player, who is plummeting in the rankings. He’s just not a healthy guy and can’t finish a lick. Sorry. Bye-bye.

Djokovic now gets Nadal in the SF. We will watch with a magnifying glass. Interesting reality check here is does Novak still have a kind of mental edge at all over Nadal, as Djokovic has really had his way with him over the last few years. I think Nadal will be too much for Novak.

That was the big take-away from the Lopez match. I don’t believe that really tested Novak other than he was forced to be more creative with the points and did show quite well at the net, adjusting to the bigger Spaniard’s serve & volley. I like watching Lopez, always have; but his tennis is a much softer version and Novak needs to be tested by a stronger hitter, a clay rat like Goffin, Thiem, maybe someone like a streaking Cuevas (love the one-handed tennis, folks). Needlesstosay, Novak gets his big test tomorrow.

Again, Novak is turning the corner a bit, but he still appears a little “soft” out there. If you want Novak to succeed, you want to see the madman. The Pepe Imaz influence perhaps has some other benefits, but I don’t “feel the love” in Djokovic’s tennis.

Murray is a mess, as in a terrifying free-fall. This could get ugly, folks. He can’t beat his mom, right now. Talk about no depth, just nothing to offer.

Like the side of Fognini that keeps his tennis midweek. He looked destructive against Nadal early and then simply HANDED Rafa the break-back that just changes a match. Fabio can be a broken string out there, for sure. Too bad. Really an awful bit of terribly errant tennis, literally gifting Nadal huge points, games, a set. . . (when he can easily play with Rafa and beat him).

Well. The Nadal steamroll continues with an interesting match tomorrow. The clay king should survive.

Do I need to save these next thoughts for another post? No. I’ll just keep it short: the best watch right now on the clay is Thiem. His match v Dimitrov yesterday was sensational. The Bulgarian was on MP FIVE TIMES in that third set tie-breaker. He was in the same position against Jack Sock at Indian Wells a month or so back: had 5 set points. Grigor whiffed against the American and repeated the effort against the rock star that is our one-handed Austrian who can absolutely control a match (somehow and someway) with his raging tennis. What a watch. Those two played some dynamic tennis yesterday. Loved it. That’s tennis, folks. Fire, style, brilliance.

Unfortunately for Dimitrov, this was devastating, like what happened earlier at IW. He had such a brilliant start to the season, winning Brisbane, the epic QF with Nadal in Melbourne. He had control of this match. That’s what’s so utterly brilliant about Thiem. His in-point focus, a Nadal-like fighter’s fury, dumbs him to his disadvantage, like Nadal. Dimitrov served in the third 4-1. The 3rd set tie-break is a great battle. Thiem’s velocity and angles, from both sides, makes for compelling tennis. Dimitrov battled, too, but faded in the end. Thiem was just too much.

What happened today with Zverev both disappointed me and had me nodding my head. I wanted to see Thiem v Zverev in the QF, but Zverev got mugged and stuffed in a bag by Cuevas.  The one-handers!

I would have liked Thiem in that potential QF (I still like him v Cuevas). Thiem is a clay-courter, a pretty dazzling striker. Big serve, as well.

Hope you’re getting a chance to watch. I can distrust the surface and appreciate the tennis at the same time. These points are not mutually exclusive. This is true with a lot of things.