We’re into the draw in Miami, so a few thoughts on that along with my continuing exploration of how to get this blog to blow the hell up and become a bigger part of my and your life (I am not kidding).

Quick thoughts on Miami. Nothing too startling. If you were caught off-guard by Pella beating Dimitrov, certainly that’s an upset – but I have to say that I don’t expect too many dramatics at the Miami Open. And this really isn’t that upsetting.

The field is depleted. Missing Murray, Djokovic and Tsonga for starters (especially the first two since the story-lines are pretty intriguing) hurts the top depth. I don’t expect Nadal to win this tournament, nor I am particularly high on Federer, but another IW/MI double from the old Swiss gent would be pretty demoralizing for the rest of the top guys. The points race is a fairly interesting story-line all by itself.

Federer will likely take-in a bit of rest during the clay season as that’s what I’ve heard from Federer in interview and Ljubičić said as much back in early 2016 when he joined Federer (if you remember, we loved that idea and said such a strategy would have aided his tennis self-esteem from 2008 on as the clay is where Nadal gained so much dominance over the rest of the tour, which he carried into non-clay events. There is no question in my mind that this dynamic hurt Federer and alternatively emboldened Nadal’s overall game. However, how do you tell Roger, the 2nd best clay courter in the world during this stretch to sit it out? Exactly. Tough call). But expect Roger to rest a bit during the 2017 clay as he anticipates a run at WB.

Having said this about Roger’s clay abstinence in 2017, this might give him a little extra motivation to try to pull-off the double in Miami. Again, this would absolutely rock the rankings/points race and add to the confidence of Federer, which has to be already sky high. But this is a tough tournament, with slower, wetter conditions, so he has his work cut-out and his draw has big-time resistance.

He gets Tiafoe today, a tough, athletic player who could give Roger a little run; then again, the kid is 19. But I like his game. After Tiafoe, Roger should get Del Potro. I suspect the Djoker fan club has their eyes on this match. Knowing how these folks think, they would use a Del Potro win as a massive boost to their flagging tennis egos. We’ll all have our eyes on this. If Federer is in form, I can’t see this as a very competitive match. But we’ll see.

Then the likes of Querrey, Thiem, Kyrgios, Zverev and Stan could meet a charging Federer, if that’s in the cards.

In the bottom, the likes of Nadal, Raonic, Nishikori, Sock, or Verdasco (seems like a guy who could flourish in Miami) could emerge.

Regardless of who is missing from the field, the tennis will get quite entertaining over the next week.

As for a nice transition from my brief (and superficial) notes on Miami to the discussion of my blog, you can go to the search bar on the top left of my home page and type in “Pella” and see what I have written about this Argentinian workhorse. His #158 in the world will 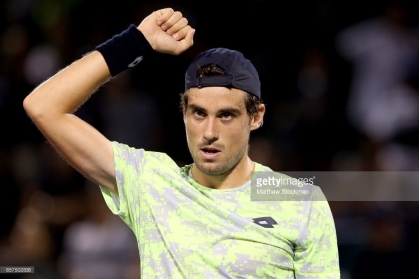 fool you. I have watched him play a number of times and have often been impressed with his athleticism and fight. At 26, he’s perhaps been moved by the same spirit that moves his slightly older compatriot, Juan Del Potro. Dimitrov ran into Pella. According to what I’ve already seen and written, not as big of a surprise as it might appear.

I think we’ll see Dimitrov hopefully find his form for the grass and summer HC. Sure he will continue to compete and do damage on the clay, but his all-court tennis will shine as the weather warms and we set sail for England.

Two more thoughts on young American prospects: Taylor Fritz continues to show almost remarkable ways to collapse in matches he’s got on his racquet, breaks in hand, etc. He was up 5-2 in the third against Kohlschreiber, only to lose in the decider’s TB 4-7. This has been a pattern from the young American. Sure he got a win over 6-seed Cilic in IW, but Marin is an absolute tennis turd stain right now. He’s out in Miami R1, as well. Horrible.

The other American, not as young as Fritz, is Donald Young who continues to show decent form. In IW he beat a tough Sam Querrey, who was playing well, coming off his Acapulco title and then Young just routined Pouille, who has shown all kinds of trouble on tour of late, compared to the flashes of brilliance he showed in 2016. The year is still quite young, so we’ll keep our eye on this Frenchman, but good for D. Young. He continues to play well.

This blog is a healthy discussion of tennis, which I can only say because of the contributions of readers. I am so grateful for this chance to interact with the variety of readers I’ve had over the almost two years that I’ve been really pushing the tennis analysis and conversation.

There will be some changes to the blog, as I have to make efforts to build a stronger tennis empire 😀 , provide more coverage and commentary, offer more “products” or production, i.e., make this a better experience for tennis fans.

One thought I had was in simply changing the name to “Mcshow Tennis Blog International.” This might be a bit redundant, stating the obvious, only in that tennis is a massively international sport and culture. But this has been probably my favorite part of the growing readership – you all are from all over the world. This is not an American tennis blog by any stretch of the imagination. I even put the Google Translator on the homepage, to enhance this multi-cultural element (I understand that people can make this move on their own: I just wanted to underscore this value). Again, thanks for reading, folks.

I sense that some people build their site’s “strength” by offering some kind of news letter, which readers have to purchase. This seems a bit bold, but I wonder if it would make sense to make people at least become a “follower” in order to access the posts, etc.  I have to continue to explore WordPress to see what kinds of minor, but effective changes I can make.

As the readership grows, you will see things like a Mcshow Tennis hat or t-shirt. You laugh? Look: I want one, so I may as well make a couple of extra to see if they’ll sell. Indeed, I am going to be a bit bolder on some of these fronts.

I have been bold with my tennis commentary. Do you remember what I did to the Nadal/Federer H2H? Search that on this blog. How has that played out?  Not in the actual numbers, but in terms of the legacy, the argument that this weak statistical marquee is unbelievably flawed. It’s embarrassing.

How about my HRFRT series, which I am going to finish very soon (though I may have to continue to update this “book”) and compile in a more complete “package” for readers to enjoy. How has this played out? He is continuing to ruin, smash, destroy and ridicule this glorious sport of ours ;D

What about my Djokollapse argument last summer?  He does recover, I believe, but time is running out on his “harvest,” if you know what I mean.

These are all bigger arguments, chapters 😉 , compendiums, volumes that I need to compile for a more coherent read on these narratives or debates.

In other word, I will continue to be bold in my analysis and commentary. I only want to strengthen the infrastructure, the community and the commitment to Mcshow Tennis International.  Ha!

Continue to enjoy Miami, which looks a bit like Stan’s second 1000 title. 😉

Thanks again for reading.