Here’s what I wrote yesterday, previewing last night’s QF between Nadal and Raonic:

“The big question is what happens in the Raonic v Nadal match tonight. Raonic should win that match. Nadal, physically, doesn’t have enough to go deep with a big serve and hitter like Raonic. I am not even crazy about Raonic’s overall game, but he made the SF last year and so long as he’s 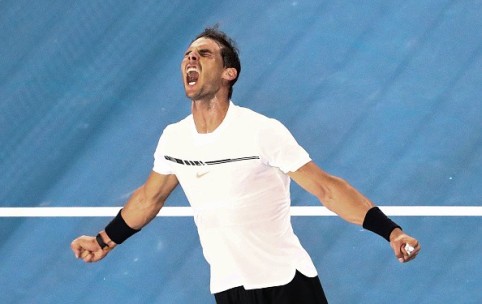 healthy, he should dispose of the Spaniard. He even beat Nadal a couple of weeks ago in Brisbane, in 3 sets mind you, but still. Raonic is 2-2 H2H vs. Nadal in their last four meetings (Nadal is 6-2 overall). In the end, if Raonic can keep his body intact, he should advance.

But the witchery of Nadal could rear its ugly head in this last QF match. . . .

Don’t fool yourself into thinking this is Raonic in a steamroller. This one, as long as Raonic is healthy, is all mental. He has to put-up with the idiosyncratic Nadal on a huge stage where Nadal has support and momentum. Nadal, like most of these guys, is feeling pretty excited about the chance to steal a major with #1 and #2 gone fishing. How much does the Moya factor play into this? Should not. Raonic needs to S&V and hit those little pink lifts Rafa calls shoes off the court.

But we can expect some complication in that endeavor.”

I think everyone agrees with me that Raonic, hovering around #3 in the world, should have beaten Nadal last night. This had to be part of any preview of such a match. He had beaten him in Brisbane, and in Indian Wells in 2015, so the trend should’ve continued, especially when you consider the trajectory, supposedly, of each man’s career.

But in the above excerpt you can hear me hedging, talking about the caution one should have in picking the Canadian. Nadal’s witch-craft, indeed, reared its ugly head. How you ask? Some of this is just Rafa, his OCD, his competitive insanity. And some of this is the Moya factor. We do not know exactly what their game plan was against the large, awkward Raonic. But anyone watching could see how much Nadal’s court positioning during Raonic’s serve affected Milos.

Nadal was inside the baseline on first serves, blocking 135 mph missiles back in play (keeping the ball in play remained one of the Spaniard’s critical strategies). He’d drift deeper during second serves. This change in Nadal’s positioning flustered the Canadian. Nadal got in Milos’ head early and often. This had to be Moya, another voice in his camp that people have been wanting Nadal to invite for years. Not only was Carlos a new voice, but he was Raonic’s coach last year! There was even talk last night on the broadcast that suggested Carlos had told Raonic he didn’t want to travel as much, wanted a smaller role or none at all, only to turn-around and begin working full-time with Nadal. This might have upset the Canadian? He spent parts of this match yelling at Krajicek, his new coach. This wasn’t a pretty picture, at all.

Indeed, I showed some hesitancy in my post toward Raonic, sensing a Nadal uprising, but as the match drew nigh, I got more and more certain Nadal would win this match. As Nadal then proceeded to easily seal the victory (sure the second set had some tension, but even if Raonic had broken, I didn’t see him winning the match), I thought, who will beat this guy, this machine who puts every ounce of himself into every point?

I mentioned yesterday that a factor would be “Nadal’s deliberate, violation-ridden, snail-paced tennis routine [that] could probably bore the heavens into submission.” This is part of his witchcraft. In last night’s match, Nadal did receive a warning for too much time on a critical serve at either BP or 30-30; it was a huge point and Nadal sucked all of the air out of the place (per usual) and was successful on that pivotal point (despite receiving the violation). A guy like Federer would have seemingly rushed the serve and perhaps dropped the point. Johnny Mac said Raonic should have backed-off and made Nadal begin again his routine with this violation in tow. The Spaniard continued, uninterrupted (other than the umpire’s inconsequential reprimand) and delivered the critical blow, going on to hold serve in a very tight first set.

We can criticize Rafa for many things, but one thing remains: he is one of the hardest charging, most deliberate and determined players, with a seemingly flawless style of execution under the big lights. Most players blink or wilt under the pressure of the moment and this Spanish opponent. He seems to have that intensity back and just enough on those ground strokes to get this done. Not to mention his play at the net is very underrated.

I think Nadal will be tough to beat at this point. I have seen this too many times.

His form has been garbage for about two years. There is no mistake in saying this. He has been very flawed and beatable even in this tournament. But a teenager, a loony Frenchman and an unproven 6’6″ Canadian guy who’s more at home in his “lost generation” than he is in a grand slam winner’s circle is the kind of draw, apparently, to get the Spaniard where he needs to be psychologically and physically.

He looks capable of going five the hard way, if need be. Moya’s presence seems a clear advantage, as well. Again, this guy is so efficient right now. I was pretty much watching what seemed like younger Nadal and this has to put a bit of a scare into the other three remaining players.

SF 1: Federer is the favorite because of the history and their relationship. But Roger has to play brilliantly. Does he have the strength to hit with Stan or Rafa for that matter?  The longer this match goes, the more it favors Stan. I’m giving the nod to the Stanimal.

SF 2: Nadal seems to be expanding as we speak. How much is this the 30 year-old Rafa? How much of this is the legend of Rafa? He seems destined for the final because of his experience, histrionics and the infusion of coaching and bit of fortune in the draw. 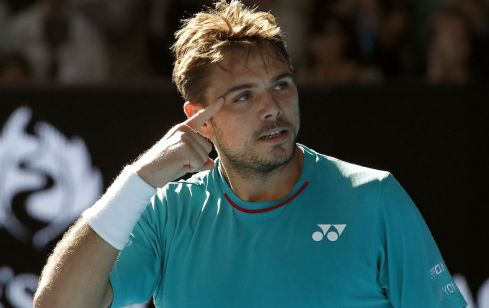 At the same time, I’m hoping, for the sake of our enjoyment, we see Dimitrov go to that next level. Nadal in straights or even four sets would be anti-climactic. Dimitrov might have regained some of that form and confidence against Goffin, but he’s in a major SF, so this is a tall order.

A Stan v Rafa final is probably the case.

I will add: Roger out dueling Stan only to get demoralized by Nadal in the final would be too predictable and diminish the quality of this major. We wanted surprise and dramatics in Melbourne. We have gotten plenty of that so far. Think of the irony of Nadal beating Federer in the final.

The more things change, the more they stay the same. . .