There has been some brilliant tennis down under in Melbourne and we have even bigger matches still to come. Are you all excited about this major championship right now, or what?

Let’s go through the draw, starting actually at the bottom, in that half that has absolutely exploded with possibility after the exit of world #2 and six-time AO champion Novak Djokovic.

A couple of thoughts on that development: first, the win over Verdasco wasn’t nearly as reassuring for Novak fan(boy)s as they might have made it out to be. The fact that the two just played recently (Doha) and the Spaniard absolutely shit the bed with 5 MPs pretty much ensured that this following match was going to be an easy win for the Serb, on his court, in his (perhaps fictitious) new found confidence. You think this is a similar set of circumstances to Nadal’s first round loss to Verdasco last year at the AO? Not even close.

There were to be no surprises here; Novak new what danger there might be in such an opponent, so he was on his game and the Spaniard had ZERO chance. No surprises, so to get all excited about that R128 win sounds like you’re looking for reasons to get excited. Is that where we are now with Novak and that fanbase? Novak even suggesting that this is the match that really worried him, that this might be “the only match to focus on” sounds bizarre.

And, of course, the irony: the following match issued the big surprise. He looked good throughout much of the match, but still, without going into detail, the Serb has lost a step, whether that means he’s not as sharp mentally during BPs, in hitting his lines, applying his impenetrable defense, etc., he’s off-center. And here’s another big factor in the problems he’ll face going forward – same with Nadal (though not the same with a guy like Federer): the Serb’s serve is unexceptional; his serve does not intimidate the guy across the net. Sure he can find a better serve in his practice and confidence, but it’s not his go-to weapon. He and Nadal are similar here. Pete could have played a few more years, like Roger, because of that serve.

And for those saying Novak will come out of “this” and still win 2-3 (or more) majors need to wake the hell up. I argued he HAD to win AO because he’s 30 at the FO, and WB and the USO are not his cup of tea or martini, so to speak, so he needs to get the hardware while he can. You think he’s dominating in 2018 like he did in 2015 or the beginning of 2016? How many majors did Nadal and Federer win after 30? I’m pretty sure it’s 1 major between them. We’ve talked about this at length.

However, despite Novak’s situation, a defense of his 2016 FO is not an impossible scenario, imho. Should we delve into his clay form? Interestingly enough, clay could be his best surface though I know he’s fared admirably on the HC, as well. He grew-up on clay and has collected many clay titles throughout his career. The fact that the clay GOAT had prime tennis during the same era is pretty much the way it goes. More on that later and there’s a lot of tennis to play between Melbourne and Paris either way.

The AO Bracket at the R16

Istomin v Dimitrov should be a win for the Bulgarian. You know where I’ve stood on Grigor’s form for a while now. He finished 2016 surging and has simply looked brilliant in what tennis we’ve seen from him in 2017. Istomin has played back-to-back five-setters, so he should be taxed, but the man also seems to be on a mission. Very impressive that he backed-up the win over Djokovic. But Dimitrov’s form (energy and efficiency) should prove a bit much for Istomin.

I was a bit concerned about the Gasquet match and woke up this morning to watch. Even though the score line looks completely one-sided (3 2 4), the match was tighter than that, the tennis simply eye-candy. I have promised a post or two on the OHBH for a while; it’s just a better stroke than it’s counterpart. If you didn’t see the Dimitrov v Gasquet 3R match last night, find it. Gasquet played well, but, AGAI 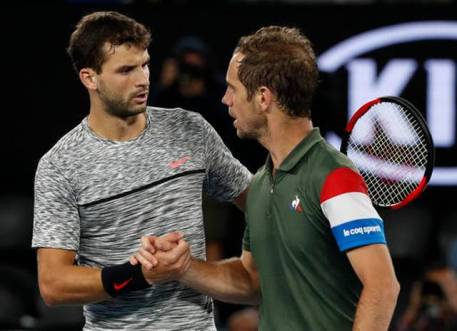 N, the Bulgarian is flying right now. His tennis is confident, ascendant, fluent from both sides, his serve very efficient (he won a remarkable amount of his first service points), his defense terribly good, flexible, quick. His body language and overall urgency in these matches is palpable. I know what happened in the Djokovic v Istomin match: Novak ducked Dimitrov 😀

Brad Gilbert was calling the match and said he sees Dimitrov cracking the top-5 by the end of the year. Looks like BG is on-board. Going-in to this match with Gasquet, the Frenchman had a 5-1 H2H advantage, but the last time they met, 2016 Shanghai, Dimitrov advanced 4 and 4. Under the guidance of Danny Vallverdu, this is a different Dimitrov, similar to the 2014 project, with major development perhaps in store.

Goffin v Thiem is a solid match-up. I haven’t seen much of either in Melbourne. It’s #11 v #8. If Dimitrov can continue his march, a QF with either the Belgian or the Austrian should be an entertaining match.

RBA v Raonic should go the way of the big 3-seed. RBA is a tough player, however. I watched a bit of his match against Ferrer last night. Talk about a grind. RBA is pretty capable out there and with that flat FH weapon, he can finish points from the BL, has grown accustomed to winning tennis matches, so this is not necessarily a run-away for Milos. We expect Milos to advance.

As a nod to my OHBH argument, watching the Dimitrov v Gasquet match in comparison to the tennis in the RBA v Ferrer match: (practically) adult tennis v a junior brand of the sport. What a contrast, in more ways than one (pun intended).

Nadal v Monfils is strangely a coin-flip. Here’s the point with Nadal in a look at his match vs. Zverev, which I saw almost in its entirety: the Spanish great is not that sharp these days, something I have said for a few years now. Everything from his serve to his ground strokes, the tennis is certainly above average, but not by much. His net play is still strong, but he has to get there. Zverev was much more impressive but for the bad unforced errors, his terrible play at the net and then the cramping in the fifth set.

The German teen looks good. His game is big. Both the BH and the FH are scary good (he absolutely crushed Tiafoe, not a surprise but I had more –false–hope for the American teen). Zverev’s serve is big, as well. This guy, as everyone knows, has a solid perhaps great future on tour.

But he let Nadal stick around, and one thing is true about Nadal: he’s a chess player out there. He absolutely schooled the teen in five-set calculus. That was fun to watch, actually. I’m happy for Rafa. He’s one of the best performers out there, giving his all, battling. When Zverev began cramping at 2-2 in the fifth, it was over.

However, I do not for a second think Nadal can win the AO, a thought I am seeing thrown around the tennis discourse right now. No no no. His short balls, average serve. . .not enough. He did use the cut very effectively against the German, his patented inside-out FH was scary (per usual), but not enough to beat some of the players he has in his path. Looks like Moya’s influence was there in the serve, adding more body serve to the game, but again, Nadal is a few steps slower and the ball is just not deep enough. Nonetheless, good luck to the Spaniard.

As for Monfils, who the fuck knows what he’ll do. He looks good, but he hasn’t played anyone and who knows if he’s smoking the same crap that’s got Kyrgios all messed-up, so to speak. If you’ve been reading this blog, you know my thoughts on Monfils. Let’s hope he shows-up and plays well, at least tries. But don’t be surprised if he goes MIA.

Evans v Tsonga. Yes! I like both of these players. Tsonga looks good and I said watch-out for the old Frenchman – he might have one or two more big runs in him as he winds-down his tennis career. He spanked Jack Sock. Tsonga can be a very difficult out.

Evans is looking good. We did not overlook that second round match against Cilic. Cilic is a mess, but this may have a bit more to do with Evans’ form. A bit of a nod to Fed’s form, he beat the Brit pretty easily in the Hopman Cup a few weeks ago, in a match that was quite entertaining as far as the purist shot-making interest is concerned. Evans can play. I love the Evans v Tsonga match. I’m saying Tsonga has the form, but watch-out for that squasher. Watch this match.

Seppi v Wawrinka. Not much to say here other than we need Stan to march-on for the sake of the deeper rounds. Stan has to be licking his chops right now. Seppi hasn’t really been tested. Stan has to win this and should.

Federer v Nishikori. I saw the highlights of Fed v Berdych, so I understand all of the arousal for the Express’ game right now. Like I said, he looked decent at the Hopman Cup against the likes of Evans, so he’s got some match play under his shoes and his form (display) vs. Tomas was vintage, I get it. But we (should) know not to get too excited. He’s 35. Nishikori will be a very interesting match. Is Kei healthy, 100%? He faded in the Brisbane final due to injury, we’re told. 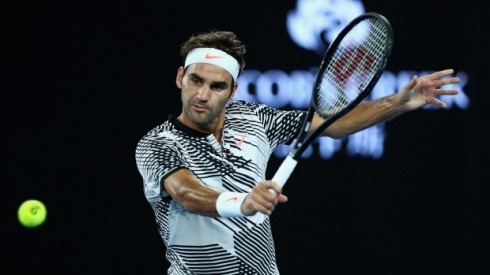 Bottom-line: if Fed straight sets (needs to for any further success) Nishikori, that QF could be even more interesting. He has a mental edge over Murray, as he does with Berdych and Nishikori. That’s fine. But we have to see the Maestro string together a few of these brilliant tennis matches. His BH looked so good against Berdych. His form when it’s going is of legend. But I’m yet to get too caught-up. This we can agree on: so nice to see Federer playing well at a major. The youth of Kei and especially Andy just seems like a lot to overcome. Can Roger’s errors stay in check? Can his serve give him some freebies? A lot of questions with the 35 year-old but the intrigue is pretty electric!

Murray will play Federer or Nishikori in that top QF. We know this. And Andy should win this tournament, on paper. But they have to play actual tennis on the tennis court, so let’s buckle-up and get our spectatorship in order.

Talk to you soon!

5 thoughts on “Australian Open at the R16”