We have the most anticipated, most appropriate final tomorrow to decide not only the World Tour Finals Champion, but the year-end men’s top tennis player in the world for 2016. The match-up is set and this is the first time we’ve had such a consequential WTF final, with a huge championship at stake, and world #1 going to the winner – the weight of year-end, a final event to define 2016 in one match to rule them all. 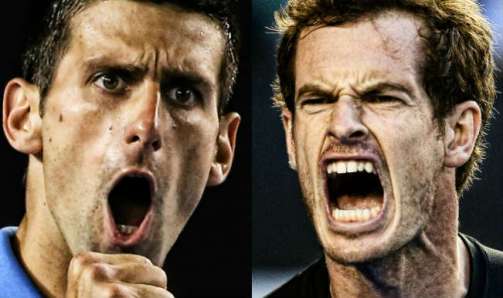 Djokovic has a ton on the line: a sixth WTF championship (to tie Roger), and a fifth year-end #1, also to tie Roger, but for 2nd all-time as Sampras has six year-end #1s. If Djokovic wins, he not only collects those historical accolades, but he reasserts himself as the Don of the ATP. Going into 2017, he will have restored order and again be the sole guy on top that everyone else is chasing.

Murray has a lot on the line, as well. With a win, he’ll grab his first WTF, consolidate his #1  in the world, and psychologically (beyond physically) he’ll have genuinely earned that claim; the doubters can’t really argue that Murray’s ranking is synthetic if Murray beats Djokovic. A win tomorrow will put an exclamation point to this mammoth year-end run where he, essentially, stole #1 from the exploited Djokovic. Indeed, he has to beat Djokovic to strengthen that grip on #1, authenticate the journey and this huge tennis distinction.

But there’s more to consider here in the context of this final: where is each player with his form, and level of energy and mental strength?

When I previewed the WTF, I liked Djokovic, before even the first ball in the first RR was in the air. That’s called tennis common sense. If you listened to Nolefam, there was a lot of concern and insecurity; sure, some of this was warranted. He’s been down. But if any sort of tennis would help such insecurity, it’s the round robin format (I was considering bigger factors than the RR format). He could have actually lost a match, even two matches and still managed to make the final (although from the points perspective, that might not have worked-out for re-claiming #1). The point is: he certainly could have lost a match and survived, gotten his back to the wall even more so, had a chance to rally his troops and find his form even in light of a loss (in fact, Djokovic said during that first round that he thinks the RR is a great format for the Olympics. Ya think?).

But given the stakes (his are very high, much higher than Murray’s), he would find his form was my contention. And he did.

And he got a cream-puff draw (I commented on that). So there you have it.

Djokovic is in perfect shape for this final.

Question: who has the most pressure on him in the final?

Djoker fan club members will probably say Murray, arguing that he’s desperately trying to hold-on to that top spot, trying to maintain this dream-like run, cherish this massive achievement. But that’s ridiculous. Let me give you an objective read on this: ALL of the pressure is on Djokovic. Not only is he an historical great who has had a great 2016 despite his recent drop in form, but he’s rested and has to be as confident as anyone can be. In his last two matches he’s lost five games total. He went 61 62 and then 61 61. Lol.

I almost titled this post “Djokovic or Chokovic?” That’s where we are here. That’s how much pressure is on Novak to win this final and restore order on the ATP and set-up his continued run at the record books. That’s really all this is about at this point. His audience is not London. It’s not all of Nole’s little fanboys and girls who flood message boards or blog about their weirdo obsession with the guy. Nope. His audience is tennis history at this point. His audience, if this makes it easier to understand, is Laver, Federer, Lendl, McEnroe and Pete and Connors, et al. Novak has to win in front of that crowd. Indeed, the stakes are very high for the Serb.

On top of that, he hasn’t played, outside of Raonic who took him to two TB, a soul. I actually got to watch the match today between Novak and Kei. I watched the first two games and turned it off, and only glanced at the score a couple of times on my phone. However, I did tune-in as the American announcers (Annacone, Arias and Brett Haber) were starting to practically make fun of Nishikori as he was flirting with losing a match in which HE NEVER HELD HIS SERVE. He ended-up holding one service game. Totally embarrassing.

I left after the second game, when Djokovic broke, ready to serve 2-0. It was so clear Kei was in-over-his-head. For all his success (few and far between to be honest), this is Nishikori. We all understand he took Andy to three brutal sets, one of the longest 3-setters in ATP history. But that was a match of less consequence than this SF.

That you can go so big in a RR, but lay a fucking egg in a SF is pretty much an indictment of your tennis. He can take anyone to the edge of the cliff. He gave Stan a run in this year’s USO SF. A few points here and there separated those two in NYC. Same in his RR with Andy. But to show-up at a SF and play like that is beyond bad. Novak’s form made the trip to London, but Kei stunk-up the O2 in a way that screams ATP 250.

Andy, of course, played another monster match. Raonic is a real threat, which I have said all along. I did not get to see, but saw highlights. Andy survived.

Let’s cut to the chase. There is really no case to be made that Murray will win tomorrow.

Unless: this does become more psychological and Murray does have just enough tennis gravitas to stay in the match and put enough pressure on Novak. We’re in that 2009 Australian Open final universe where the guy who should win, who has the most energy and is probably the better player, chokes to the guy who is playing on fumes and who does not have the arsenal as that rested favorite.

If Murray loses, what’s the shame in that? His year-end run has been epic; he brought so much interest to the tour, to the tele for these last few tournaments that became steps he was climbing to the top. At the same time, he’s taken advantage of no-Nole. Novak’s loss in Paris was bad, but Murray has been accumulating most of these points without Novak around to prevent him from accumulating these points. If Murray loses, he’s had an amazing run. Even in the WTF, he outlasted these threats and he made the final. He’s hammered, smashed, etc. Any real tennis fan has appreciated this run from Murray.

And we could even argue that Novak’s win tomorrow would be only right, that he’s the true world #1 and despite allowing Murray to overtake him, he’s now back to defend his legacy and more legitimate claim as the true #1. Novak’s history is littered with such greatness. His win tomorrow would seem only fitting given the long narrative of these two.

Making the story truly memorable is that the great Scot got to taste #1. He grabbed it – even though the circumstances were perhaps ideal. If Murray loses the championship tomorrow and his #1 ranking, there is no regret – even though the groups perhaps didn’t help in that Novak got to play Thiem and Goffin (along with one true test) whereas Murray navigated a RR nightmare and then played Novak’s one true test.

Novak has to win tomorrow. There is no other way around this. And he probably will. If I had bet this over a week ago, given my preview pick, I would have done pretty well.

I hope I’m wrong. Perhaps I’ll write about this in my next post, but a Murray win would be a lot more interesting, mainly for 2017. Granted, I do understand the weight of legacy and as I have said, it’s almost only right (just, as in morally) if Novak wins because he is a true tennis giant and the win would perch nicely in his tree of tennis grandeur. I totally understand that.

But for the dramatic end of the story that values plot mystery and character development, a Murray win would be rich.

In fact, that’s the true essence of this final tomorrow, especially in the element of character development. Murray’s only chance is to win this final on character, on, as I said, his tennis gravitas. Physically, I’m afraid he’s outmatched by the ascendant Serb. But given his career as a top-5 journeyman who’s sniffed the heels of three tennis greats for years, who’s battled beyond failure, the 2016 maturation of Andy (as a father and student of the game under the master tutelage of Lendl) presents that bit of hope for the Scot. Keep your composure, Andy, affirm your character, and provide the plot twist that will keep us guessing into 2017 and beyond.

Andy’s character argument. At this point, I’m afraid that’s all he’s got.