The actual match was a foregone conclusion, and really not that great of a match, to be honest – even from Novak (in fact, the entire match seemed somewhat anti-climactic given Novak’s form over the last year or so, over these last 4-5 years even, over the fact that he is so comfortable on clay, grew-up playing on the dirt). This all makes me want to dive into the historical ramifications here, discuss the weakness of biased sports analysis (it’s not really analysis but hysterical cheerleading) – basically hit some deep DTL OHBHs of commentary at this event that we’ve all seen and heard and read so much about already. I will say a couple of things about the match, turn to some bigger perspective and then set the stage for some issues I certainly want to explore as we build toward Wimbledon. 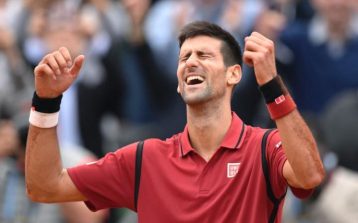 You already know what happened. Djokovic beat Murray to win his first French Open title. It’s historical. Ironically, Novak’s form was so tentative early and late in this match (with even a few glimpses of nervousness during those dominant 2nd and 3rd sets) that he was ripe for the taking. He was not nearly as dominant or flawless as we’ve grown to expect from this #1 player in the world.

The first set was bizarre. The insightful (even if some don’t like his style) voice-over of John McEnroe spelled-out this match perfectly. He was saying the things I was thinking and he was all over this match, even helping Mary Carillo with a few clarifications along the way. One of these was when Novak was up 40-0 in probably the 3rd set, cruising, and he hit a failed drop-shot. Mary says Novak needs to abandon that shot. Given the state of the match, her comment was way out-of-touch. Mac pointed-out that at 40-0 he can afford to use that shot AND, more importantly, Andy looked like he was about to collapse from fatigue, so Novak was wanting to continue to run the Scot into the ground. No brainer. Mac was on his game. This insight (most should’ve seen the Serb’s confidence building from late 1st set) helped make the match even more anti-climactic, predictable, etc.

That’s really how this match played-out, awkwardly: Novak was uncharacteristically error prone in the first set, yet Andy still used a lot of energy pulling off the advantage. You could see toward the end of the first set, as Andy closes it out, Novak is finding his rhythm, starting to get to Murray. You knew the second set and the rest of the match was going to have a very different outcome from that first set. Andy was done.

Again, despite Novak’s crap form (nerves, stage-fright, whatever you want to call it), Andy still seems to have wasted himself winning that first set. That was the rest of the story. Novak ran Andy around the court, seemingly toying with him. And much of this is on Andy. Look how many times he hits that BH CC where Novak is standing, waiting, ready to pounce. Andy didn’t make Novak move much at all; not enough BH DTL. Furthermore, the drop-shot that Murray used so well against Wawrinka was gone. I almost joked that he better not over-use this with Novak in my preview. He abandoned it! Sure Novak can cover just about anything from Murray (or anyone), but Murray’s game was just too predictable, something we’re very used to seeing. Something that made me cringe at seeing this match-up in the final.

So, Murray’s fatigue and predictability played right into Novak finding some form in the body of the match. Things got interesting late, and I will certainly remember this for Novak almost blowing that fourth set, but it really was simply his to lose. Just to reiterate: serving at 5-2 for the championship, getting broken, Murray holding serve, and Novak, who finally feels comfortable getting the fans involved at his first MP, getting ready to celebrate, plays some of the most conservative tennis he’s ever played. He just waited for Andy to commit another UE. Murray obliged. Wasn’t exactly a dominant conclusion.

He finally closed it out. Well done, Djokovic. You earned your embrace of La Coupe des Mousquetaires. You continue to win and the numbers (the championships) say it all.

Of course, this seems like a celebration that should have happened a while ago.

This is where that term “earned” comes into play. I think the championship match yesterday was below average tennis from both players (Novak got going in the 2nd and 3rd, but Andy was out there playing pretty inefficiently, predictably), but Novak “earned” this trophy as a kind of life-time achievement, more or less like Roger in 2009. To say things like luck (one’s draw or his opponent’s draw), etc., is some kind of fanatic’s rambling expression.

To bring up those numbers only highlights how difficult is this major and how ironic that he doesn’t win one until his 12th try, despite the fact that it’s probably his best surface. Think about it.

And the reason this is the case is because those years correspond to the clay reign of you-know-who.

So, he wins the elusive FO. He has 12 majors, he just turned 29, and there really isn’t a single player on tour who will be able to consistently challenge the Serb.

After last year’s FO, I wrote about the disappointment of that loss to Stanimal. I tried to explain how he missed a huge opportunity to enter into that elevated discussion of greatness. He was at 8 majors. He had had a tendency to lose these big matches, these finals. He was 8-8 in finals at that point, FO 2015.

Obviously the summer and here into 2016 has been an incredible run. He has won the next four majors and counting (12-8).  In that earlier post I’m pretty sure I said this will most likely prevent him from reaching the teens in Major wins. He was stuck at 8, presumably and had this terrible pattern of losing on these big stages, enough to say he might not run-off 4-6 in a row (or more!).

What a difference a year makes. If I have to say so now: he catches Federer’s mark of 17 majors. I just don’t see how he doesn’t aside from injury. Or perhaps if he has a big let down now (which is what I predicted in my 2016 predictions – win AO and FO and have a let down with WB only a month out AND the Olympics, etc.). But if you think about it, he’s too obsessed. This is too important to him. He has so much momentum. I say he has another 2 years AFTER 2016 of serious contention at all four majors. He ends 2016 with 13 or 14 and then two more years of serious threats, with that strong mental and physical game. He figures it out. How doesn’t he?

Congratulations to Novak and his family and to his people back home and abroad. We know how important this is to that country and its citizens. Brilliant national pride that one has to respect and appreciate.

As for the “fans” of Novak, the fanboys and girls that pick certain players to root for and create websites and blogs about, this is a different kind of stew. Or let me put it this way: it’s not tennis analysis. Don’t confuse the two. Can analysis get affiliated with certain perspectives? Sure. This is called one’s school of thought among other things.

But over the next day or so, I will dive into the GOAT discussion (hysteria) that has accompanied this FO win. As one can see from this post and many more like it, I have great respect for Novak and his tennis, but I will, in my usual way, complicate the discussion that is roaring from the wet lips of his fanboys and girls.

Of course, grass is getting underway, so we’ll keep an eye on those events, as well.

Until then, thanks for reading!