We could not have asked for a better final four.

I just finished the Stan v Murray match; Stan moving-on has to be what most non-Brits/Scots would like to see.  Stan, on form, can be pretty breath-taking.  That’s more or less what we saw in the Murray match, but a few questionable stretches and some odd strategy makes one wonder a bit.

Stan and this court, as many have already said, is a perfect match.  He has no problem moon balling with the likes of Murray or Nadal.  He has time to find his shots; the court suits his athleticism (or lack thereof) and his swing.  Today’s match looked a little like the FO Stan, bludgeoning Murray all over the court, hitting the SHBH better than anyone in the

game CC or DTL.  Pleasure to watch Stan play like this, on courts that match his style of play.  In addition, his serve, when on, was equally as powerful, intimidating.  The call on the court was he hit a couple up around 130mph.  If he can maintain this form, he will be tough to beat.  And Murray played well (with his “box” in the nose-bleeds, seriously, up in the rafters so he could, apparently refrain from yelling at them).  Murray had this match. Absolutely goofed the first set TB up 4-2.  Unreal.  Literally handed it to the Stanimal there.

Some worry is a few lapses in focus, from Stan.  Handing service games to his opponent, not finding his big serve, unforced errors. . . the kinds of things all players deal with.  But the serve and volley from Stan seems a bit odd, even unwise.  Implementing at 40-30 (or the like) seems especially questionable.  40-0?  Perhaps.  Need less to say, it’s not his most effective game plan.  Roger S&V?  Even Novak or Nadal?  Sure.  Stan against Murray?  No.

Stay back and bludgeon, my friend.  If the Stanimal I saw today (for the majority of the match) hangs around The O2 this weekend, could be fun.

Nadal is playing well.  His form now versus the first half of 2015 is a puzzle for the greatest scientists in the world.  No other top player, of his caliber, plays so inconsistently.  That’s a killer for those Nadal fans who want to make more out of him than there is to make.  It’s flimsy, unpredictable and inferior tennis.

Having said that, his game strategy is, perhaps, the best (ever) when he’s playing well.  He’s a killer.  He reminds me of an athlete in a different sport, soccer/futbol, for instance.  A monster midfielder who absolutely demoralizes his opponent. And this heart and warrior-like demeanor is really sport intelligence disguised.  We’ve seen him out work and out smart

many players (who should beat him) who are probably both a bit intimidated and caught off-guard.  Before they know it, they’re done.

I’d be surprised if Novak spanks him, but Novak should win.  Of course, we’ve all seen Nadal bounce back no problem from previous extended workouts and defy logic many times before.  He’s a machine.  He’s a lot smarter than he looks.  And this court suits his spin, high bounce game a ton.  He’s right at home on these courts.  God save us if he advances to the final.

Federer is simply the Maestro.  He’s Roger Federer.  Granted he’s 3-0, he beat Novak in the round-robin, and he’s on the verge of winning his 7th WTF.  But now he’ll need every ounce of Federer tennis genius to survive.

I don’t think he wins this tournament.  It’s that simple.  The other 3 players, in my humble opinion, make better cases for the crown (see below for the big intangible in Nadal’s case*).  Even if he beats Wawrinka, he has to comeback and beat, most likely, Novak, a second time in a week.  Even seeing him face a Nadal who has just beaten Novak would be pretty unsettling for the Swiss king.

If he happens to win, and obviously this could be the case, anyone with any interest at all in the sport of tennis needs to 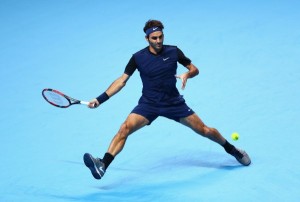 The long farewell tour continues.  You think catching 17 majors or any whiff of his other numbers will be difficult?  What about his play as a 33 or 34 year-old.  With 4 kids.  If any 34 year-old can do it, Roger can.  But I’m being realistic.  Despite cheering-on the old man, I’m keeping the champagne in the cellar until further notice.

Novak Djokovic should win this tournament.  He’s the best player in the world.  He looked pretty mediocre in the round-robin, but I see him beating Nadal tomorrow and overcoming either one of the Swiss in the final.  That’s the safe pick, but probably the right one.

If, indeed, he has lost his impenetrable form, he will be beaten soundly by anyone of the rest of the final four.

I like Novak here, especially if I’m having to pick a winner.

I like Stan if he finds that locomotive-like play and demeanor.  If he pushes Roger aside, convincingly, look-out.  He has the power and the “balls” to prevail in the end.

I like Federer if the magic continues.  He demoralized Stan at the USO. He’s recently beaten both Djokovic and Nadal.  He’s the man.  The racquet change and newer tactics look to extend his dominance.

*I like Nadal for the simple fact that life’s irony can be especially cruel.  Look at the year he’s had.  Look at his legacy with a big 0 next to WTF.  Recall his recent suggestion that they play the WTF on clay, for his sake.

A Nadal win here but be epic irony; if anyone ever asks you what irony is, here’s your example.

Which means, BEWARE: “From even the greatest of horrors, irony is seldom absent.”  H.P. Lovecraft, American horror fiction author.

Sure, that’s a bit much.  Most likely we have Novak finishing his long, inspiring journey towards tennis history.  Then again, anything can happen, especially in this company.